How Autonomous Vehicles Work: The different shades of autonomy ranging up to a fully self-driving car 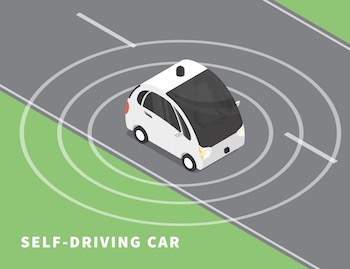 The topic of self-driving autonomous cars has grown over the past year from a niche oddity to a widely acknowledged inevitable change to the future of personal transportation. Market analysis from BI Intelligence indicates that by the year 2020, 10 million autonomous vehicles will be driving on roads across the globe. Other forecasts are somewhat bleaker than that. For example, recent remarks reported from Raj Nair, the product development chief at the Ford Motor Company (NYSE:F), indicate his belief that cars sold in 2020 will be one step below full automation. Still, the days of the self-driving vehicle and the hands-free commute are coming, and the next five to ten years should be a very exciting time during that development.

Autonomous vehicles are easy to think of as just self-driving cars but there’s an incredible range of innovation required to make this pursuit a reality. In taking the control out of a driver’s hands, car manufacturers must figure out how to get the car to avoid obstacles, stay aware of local driving laws and speed limits all while it directs itself to a planned destination based on GPS coordinates. A daunting engineering challenge, indeed.

When considering what makes autonomous vehicles truly autonomous, it’s important to note that there are different shades of autonomy leading up to the fully self-driving car. One of the organizations which maintains a rubric helping to define autonomous vehicles is the National Highway Traffic Safety Administration (NHTSA), which recognizes five different levels of autonomy for vehicles, starting with Level 0, the most basic tier in which the driver controls all operations, as is the case for conventional vehicles today. Level 1 function-specific automation is reached when a single control function is automated, such as when electronic stability control systems help drivers maintain vehicle control, without completely replacing the need for driver vigilance. Level 2 combined function automation occurs when two primary control functions are designed to work together to relieve a driver, although the driver must be available at a moment’s notice to take control if necessary; one example of Level 2 automation is when adaptive cruise control is used in conjunction with lane centering systems. The next step is Level 3 limited self-driving automation, where the driver cedes control of safety-critical functions under certain traffic or environmental conditions and can be given a comfortable transition period when the driver must retake control. Finally, Level 4 full self-driving automation is achieved when a driver cedes full vehicle control and is not expected to be available for anything more than setting a destination and adjusting navigational controls, if necessary.

The NHTSA is not the only organization which maintains this kind of checklist for judging what makes a autonomous vehicle fully autonomous. The American-based automotive engineer association SAE International provides an autonomous vehicle taxonomy recognizing six levels of automation, the first three of which rely heavily on a human driver to monitor the environment. Like NHTSA, SAE also begins its rubric with a Level 0 for no automation. This is followed by Level 1 driver assistance, where either steering or acceleration/braking is automated, and then Level 2 partial automation, where both steering and acceleration/braking are executed by driver assistance programs. At Level 3 conditional automation, all dynamic driving tasks are handled by the vehicle with the expectation that a human driver can respond to a request to intervene. At Level 4 high automation, all aspects of driving can be handled even when a driver cannot appropriately respond to a request to intervene. At Level 5 full automation, a vehicle can handle all dynamic driving aspects under all roadway and environmental conditions.

Naturally, many people have questions as to how self-driving cars can be made to travel safely on American roadways. Although certain aspects of autonomous vehicles rely on data transmitted to the car, such as GPS coordinates for navigation, much of the technology used to scan the road and stay on the right route is incorporated into the vehicle itself. One of the optical systems for road detection which is beginning to mature is known as Light Detection and Ranging, or LIDAR. Much like how radar uses electromagnetic waves for imaging, LIDAR uses laser light to analyze a car’s surroundings and create a high resolution digital image. In vehicles, 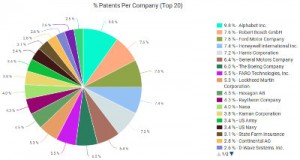 LIDAR sensors are typically mounted on the front of a vehicle but can also be implemented in a roof-mounted format. A look at the patent market for LIDAR technologies shows us that Alphabet Inc. (NASDAQ:GOOG), Robert Bosch GmbH and Ford have the top three patent portfolios in this field, according to statistics collected by Innography.

Redundancy will be the name of the game which is played in developing the first autonomous vehicles which meet regulatory approval, and LIDAR will not be the only optical system found in these next-generation cars. Millimeter-wave radar (MMW) is used in conjunction with systems like LIDAR because its performance isn’t as affected by environmental conditions like snow, rain or fog. Millimeter waves exist in the range between 30 gigahertz (GHz) up to 300 GHz, between the microwave and infrared ranges. These waves enable high digital data 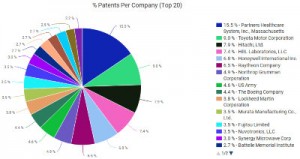 transmission rates of up to 10 gigabytes (GB) per second, although the small size of the wavelength for these signals restricts their range to within 10 meters, still useful for applications of imaging road and environmental conditions. A quick look at the patent market for MMW tech shows that Boston-based healthcare organization Partners HealthCare System leads this field, but is closely trailed by automotive developers Toyota Motor Corporation (NYSE:TM) and Hitachi Ltd. (TYO:6501).

These types of imaging technologies lay the foundation for those autonomous vehicle technologies which are marketed as being much safer than manual driving, such as is the case with adaptive cruise control (ACC). Unlike conventional cruise control, ACC utilizes information from road conditions, such as the distance between vehicles, to set a 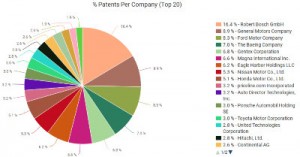 vehicle speed that keeps pace with traffic. ACC systems can incorporate lasers, stereoscopic cameras or other imaging systems to gauge road conditions. ACC systems can identify obstacles hundreds of feet in front of a car and, depending on the system, could adjust a car’s speed between 100 miles per hour (mph) down to less than 20 mph. The top patent holding companies in adaptive cruise control are Bosch, General Motors Company (NYSE:GM) and Ford.

Of course, to perform these functions, an incredible amount of computing power is required. One such chip that would provide the computing platform necessary is the Tegra X1 developed by NVIDIA Corporation (NASDAQ:NVDA). This chip offers more than one teraflop worth of processing power, making it more powerful than supercomputers which were being unveiled in the late 1990s. Much smaller than a supercomputer, the Tegra X1 occupies one square inch worth of space and only requires 10 watts of power. The Tegra X1 is the basic building block for NVIDIA’s Drive PX computing platform, which uses two Tegra X1 chips to support up to 12 high-resolution video feeds while processing up to 1.3 gigapixels per second. NVIDIA also produces the Drive CX platform, which focuses on cabin operations and processes up to 16.8 million pixels for digital gauges, navigation, parking cameras and infotainment systems. 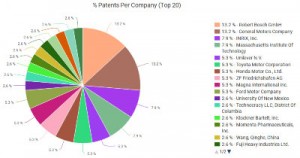 collision risk when a driver is attempting to switch lanes, it will send pulsing vibrations through the steering wheel to alert a driver. Bosch and GM lead the patent portfolios in this sector, although the Massachusetts Institute of Technology (MIT) comes in fourth place behind digital road traffic and driver services company INRIX.

A lot of the automation enabled by increasing vehicle autonomy has evolved in some interesting ways and has even provided some car owners with their own personal, invisible valet. Active park assist systems developed by Ford can parallel park a car for a driver while the driver is in the car. When the active park assist mode is activated, an alarm chimes when sensors on the car identify a location where the car can parallel park. Once a driver shifts the car in reverse, the assist system takes over and steers the car into the proper spot.

Keeping car passengers and road pedestrians alike as safe as possible are the automatic emergency braking systems which can prevent accidents. The past decade has seen some interesting developments for both dynamic brake support (DBS), which can increase the braking force to help a driver avoid collision, and crash imminent braking (CIB), where the autonomous vehicle applies the brakes without any driver input to reduce the severity of an impending crash. Like many other technologies making up the autonomous car, these braking systems incorporate radar and video cameras for imaging. Top patent portfolios in this field belong to Pennsylvania-based locomotive brake producer Wabtec Corporation (NYSE:WAB) and Bosch.

Communication systems for transmitting data between vehicles is also seen as a crucial component which will need to be in place for America to embrace autonomous cars. Vehicle-to-vehicle (V2V) communications would allow cars to communicate with each other on 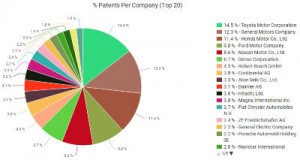 short-range communications networks to transmit data on direction of travel, speed and location. There has also been development in vehicle-to-infrastructure (V2I) communications systems which would allow vehicles to communicate with roadside infrastructure which can inform drivers of upcoming speed limit changes, school zones or even accidents found on the route ahead. For V2V technologies, the top five patent portfolios belong to Toyota, GM, Honda Motor Company (NYSE:HMC), Ford and Nissan Motor Company (TYO:7201).

Autonomous vehicles represent an exciting new future for personal transportation. The issue of handing over personal accountability of vehicle control raises some ethical issues but could also enable a future in which personal transportation services become more important than car ownership, which could be very useful for American cities as their populations continue to become more concentrated. Policy think tanks have been weighing the benefits and negatives of widespread adoption of self-driving cars across America and some states, like California, have begun to regulate their presence on state roads. In 2015, sixteen state legislatures introduced measures aimed at regulated autonomous vehicles.