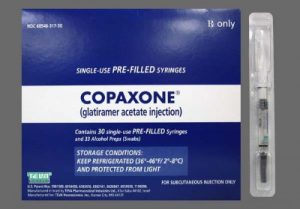 On Wednesday, August 24th, the Patent Appeal and Trial Board (PTAB) issued decisions in two inter partes review (IPR) filings made against patents owned by private Israeli firm Yeda Research & Development Co. The company is the tech transfer arm of the Weizmann Institute of Science, a public research university located in Rehovot, Israel. The IPRs, which were filed by American pharmaceutical developer Mylan Inc. (NYSE:MYL), resulted in the invalidation of all claims in both Yeda patents. About a week later, on September 1st, PTAB invalidated a third patent owned by Yeda after another IPR challenge was filed by Mylan.

The invalidated patents cover methods of administering Copaxone, an injectable form of glatiramer acetate which is prescribed to patients suffering from a relapse of multiple sclerosis (MS). The active ingredient glatiramer acetate consists of acetate salts containing synthetic polypeptide comprised of four amino acids: L-glutamic acid; L-alanine; L-tyrosine: and L-lysine. When injected into a person’s body, it simulates the activity of myelin basic protein which is used in the nervous system to provide insulation to nerve fibers in both the brain and the spinal cord. It’s believed that MS, an autoimmune disease, can be caused by T cells of the immune system attacking the myelin sheaths of nerves.

The three Yeda patents invalidated at PTAB are:

On the same day that the first two patents covering Copaxone were invalidated at PTAB, shares of Israeli pharmaceutical firm Teva (NYSE:TEVA) fell up to six percent. Teva licenses the patents covering the administration of glatiramer acetate and is the company that produces and markets prescription Copaxone. Media reports indicate that Teva plans to appeal the results of the IPR to the U.S. Court of Appeals for the Federal Circuit (Fed. Cir.). Copaxone has been a solid driver of revenues for Teva in recent years, with 2014 sales of the MS treatment contributing 21 percent of Teva’s revenues during that year.

Using the search tools available through the PTAB End to End (E2E) online search portal, we were able to obtain documents pertaining to each of the IPR filings in this case. Mylan’s IPR filing against the ‘250 patent leaned heavily on the topic of obviousness in light of prior art, specifically focusing on an international filing, WO Patent Application No. 2007081975, titled Method of Treating Multiple Sclerosis and filed by Teva with the World Intellectual Property Organization (WIPO) in July 2007. Mylan argued that this patent application disclosed the claimed subject matter to the public before Yeda filed its application for the ‘250 patent in November 2011, and this patent application factored into PTAB’s decision to invalidate the claims of the ‘250 patent. Mylan also asked PTAB to consider the obviousness of claims in light of publications made in 2002 on the use of glatiramer acetate for the treatment of MS patients, and this argument was also successful. Mylan also argued obviousness of the ‘413 and ‘302 patents in light of the ‘975 patent application and the 2002 glatiramer acetate publications.

Mylan had also targeted another Yeda patent, U.S. Patent No. 9155776, issued under the same title as the other patents targeted by IPRs filed by Mylan. PTAB refused to institute a post grant review (PGR) of the ‘776 patent for procedural reasons. PTAB made its decision to deny institution of the PGR because the ‘776 patent claims priority from patent applications made prior to March 16th, 2013; PGRs cannot be filed on patents for which the patent application was filed prior to this date under terms of the America Invents Act of 2011 (AIA). However, Mylan believes that the invalidation of the ‘302 patent undermines the ‘776 patent and the company will continue to pursue avenues that would challenge the validity of the ‘776 patent.

The invalidation of the Yeda patents licensed by Teva opens the door to Mylan for entering the U.S. market with its own generic version of injectable glatiramer acetate. In August 2014, Mylan announced that the U.S. Food and Drug Administration (FDA) had accepted its abbreviated new drug application (ANDA) for a three times weekly glatiramer acetate 40 mg/ml injection treatment for MS patients. Mylan’s generic Copaxone ANDA made a Paragraph IV certification that its generic version did not infringe upon any patents held by the brand name drug developer, or that any such patents were invalid. Mylan’s recent success at PTAB against the Yeda patents helps to justify the Paragraph IV certification.

Legal skirmishes between Mylan and Teva over generic formulations of Copaxone go back even further than the 2014 ANDA filed by Mylan. In October 2009, Teva filed a patent infringement suit against Mylan and manufacturing partner Natco Pharma in the U.S. District Court for the Southern District of New York (S.D.N.Y.) after learning of Mylan’s ANDA filing for generic injectable Copaxone. According to a blog post published by Kenyon & Kenyon, the lead counsel for Teva in this case, the court issued a June 2012 decision in which it found that the proposed generic Copaxone would infringe the patents-in-suit. Yeda and Teva brought this action forward on a series of seven patents which were different patents than those targeted by Mylan at PTAB.

IPR processes at PTAB have proven to be problematic for the biopharma industry. The loss of one patent through review proceedings at PTAB has resulted in the loss of tens of millions of dollars in value in some cases as some medications can be covered by only one or two patents. A study on IPR statistics published last November by international law firm Akin Gump found that 65.6 percent, just under two-thirds, of all claims in IPRs instituted by PTAB against biopharma patents are invalidated.