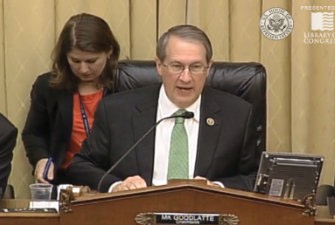 At the end of a day-long hearing of the U.S. House Judiciary Committee, during which multiple recesses were taken, a marked-up version of proposed bill H.R. 9, the Innovation Act, was approved for debate on the floor of the House of Representatives by a 24-8 vote. A number of motions to amend the bill, many of which were withdrawn, indicated that members of Congress are not yet satisfied with the language of the bill.

Dissent among members of Congress on the nature of the Innovation Act was evident from the opening remarks of the committee’s two ranking members. Congressman Bob Goodlatte (R-VA), the House Judiciary Committee Chairman and the Innovation Act’s major sponsor, stated that the Innovation Act would “ensure that the patent system lives up to its constitutional underpinnings” while targeting the abusive patent litigation which has been central to the debate on patent trolls. The ranking Democratic member of the committee, Congressman John Conyers (D-MI), said the bill was overly broad and yet it didn’t adequately address issues significant to this debate, including abusive demand letters and the ending of fee diversions from the U.S. Patent and Trademark Office’s budget. 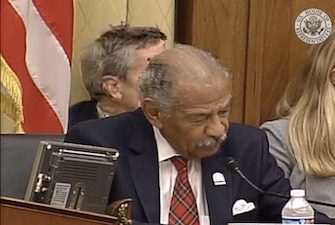 Congressman Conyers (D-MI) spent the day arguing for pro-innovator improvements to the bill.

A manager’s amendment was proposed by Goodlatte which included language on stays of action against covered customers as well as venue restrictions. Other provisions of the manager’s amendment focused on joinder to ensure fee recovery, stay of discovery and prohibitions on double patenting. In a few areas of the bill, especially sections on stay of customer suits and attorney’s fees, the manager’s amendment changes the language of the Innovation Act to bring it closer into line with the Senate’s PATENT Act. The amendment found support among committee members including Congressman Darrell Issa (R-CA) and Congressman Jerrold Nadler (D-NY). Nadler in particular mentioned that the manager’s amendment addresses alleged abuses of the inter partes review system. Conyers, however, continued his opposition, citing among other concerns the fact that the IPR language in the amendment did not go far enough to address the parts of the process that are harming the biopharmaceutical industry.

A total of 19 amendments were read into the hearing’s proceedings, five of which were approved by a voice vote. One, offered by Congressman Thomas Marino (R-PA), would mandate a year-long joint study of discovery proceedings in patent litigation in order to find ways of curtailing abusive litigation. Discovery proceedings were also at the center of an approved amendment brought forward by Congressman Doug Collins (R-GA), which inserts language into the bill regarding a stay of discovery pending preliminary motions.

Various amendments that were either withdrawn or voted down indicated that many committee members feel that the Innovation Act still has a long way to go before it can be passed in the House. An Issa amendment would have extended covered business method review procedures six years past the program’s current 2020 sunset date. Multiple committee members were unsure why debate on extending a pilot program at the Patent Trial and Appeals Board was being debated five years before that program ends. Conyers was in favor of ending the CBM program, arguing that its scope has extended beyond what was intended by the America Invents Act, which established CBM.

A few of the proposed amendments were opposed based on the assertion that they represent legislative carve-outs which only benefit certain sectors of the economy; most of these assertions were made by Goodlatte. The topic of carveouts came up in response to an amendment offered by Congressman Hank Johnson (D-GA) regarding a shift in the burden of determining whether a suit was objectively reasonable to the prevailing party in cases of undue economic hardship to a non-prevailing party. A couple of withdrawn amendments, including one by Congressman Ted Deutch (D-FL) to amend the customer stay provision of H.R. 9 and another from Congresswoman Mimi Walters (R-CA) which would have restricted drug and biological product patents from IPR proceedings, were both contested by committee members on the same grounds. At a June 4th hearing of the U.S. Senate Committee on the Judiciary, a number of amendments to the PATENT Act were also decried as “carveouts” targeting specific industry groups, most vocally by Senator John Cornyn (R-TX). 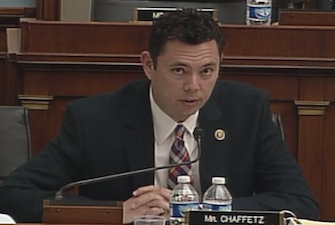 An amendment brought forth by Congressman Jason Chaffetz (R-UT) showed that there are still big interests at the table that are trying to shoehorn their views on patent reform into the Innovation Act. Chaffetz argued that his amendment would make retain the nature of both IPR and post-grant proceedings for patent review, both of which he felt were threatened by the recently introduced manager’s amendment. The amendment, however, would have struck the entirety of Section 9 of the bill, which includes a host of technical corrections to the Leahy-Smith America Invents Act. Both Conyers and Goodlatte opposed the amendment, Goodlatte specifically noting that the Chaffetz amendment would strike provisions that have been the result of years of discussions. Chaffetz cited support for his amendment from corporate stalwarts in the semiconductor and tech world, including Apple, Micron, Applied Materials and Dell. This statement seemed reminiscent of comment by Senator Sheldon Whitehouse (D-RI), again at the June 4th PATENT Act hearing, where he noted that whenever Congress attempts to handle an issue like abusive demand letters, larger industry players are very interested in having an outsized say in the patent reform debate.

Other amendments were withdrawn by committee members with assurances by committee chairman Goodlatte that more work would be done to refine the Innovation Act as it heads to the floor of the House. Congresswoman Zoe Lofgren (D-CA) withdrew an amendment on pleading requirements after Goodlatte said that he was “willing to entertain improvements to this provision of the bill.” Congresswoman Sheila Jackson Lee (D-TX) withdrew an amendment on reasonable specificity in claims, which she portrayed as a measure reducing costs for small businesses, but Goodlatte noted how this amendment stood in direct opposition to what other committee members are seeking in regards to claim structure. It seems fairly clear that consensus on what the Innovation Act is supposed to accomplish has not yet been reached among the members of the committee who approved it for debate on the House floor.

Many industry organizations representing a wide swath of stakeholders in the American patent system have also voiced their concerns about the potential effects of the Innovation Act if passed into law. A joint statement released June 10th by the Association of American Universities, the Association of Public & Land-Grant Universities, the Innovation Alliance, the Medical Device Manufacturers Association, the National Venture Capital Association and the Alliance of U.S. Startups and Inventors for Jobs expressed their opposition to the bill, representing a broad coalition of dissent from universities, inventors and business investors. In a separate statement published after judiciary committee approval of H.R. 9, the Innovation Alliance said that the day’s hearing “reinforced that the Innovation Act needs significant work before it should be allowed to move forward in the legislative process.” The group cited worries that overly broad provisions of the bill could increase the time and costs of litigation and make it more difficult to assert patent rights overseas.

Groups representing the software industry, however, continued their support of the Innovation Act. A press release distributed by the Software and Information Industry Association called the Innovation Act’s approval “an important step forward for patent reform and a positive sign that Congress can get patent litigation abuse legislation passed this year.” Software companies also supported the Innovation Act at a March 19th hearing on patent reform held by the U.S. Senate Committee on Small Business and Entrepreneurship, despite some vituperative remarks made about the proposed law by other members of that witness panel.