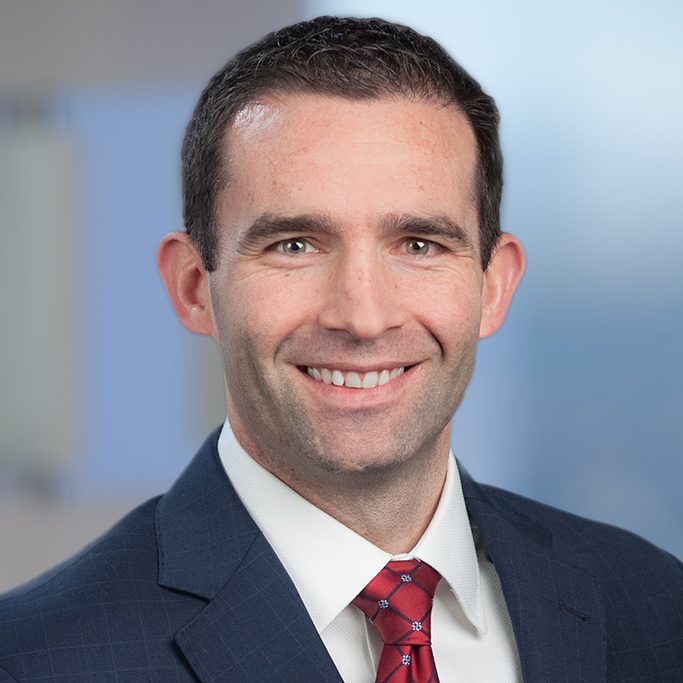 Matt Rizzolo is a litigator with Ropes & Gray who works extensively with technology companies to both enforce clients’ intellectual property rights and defend clients from infringement claims. Matt leads the firm’s practice in Section 337 actions before the United States International Trade Commission and has significant experience litigating patent cases in a variety of jurisdictions, including federal district courts throughout the United States, the Court of Federal Claims, the Federal Circuit, and before the Patent Trial & Appeal Board. His practice encompasses all facets of litigation, from pre-suit investigation through trial, post-trial proceedings, and appeals. Matt has counseled clients in cases involving a wide variety of technical fields, including smartphones, video gaming devices, computer software and hardware, telecommunications, and Internet-related services, as well as biotechnology and pharmaceuticals. He has additional experience in drafting and negotiating patent and technology licensing agreements, and is registered to practice before the U.S. Patent & Trademark Office.

In addition to his patent experience, Matt is well-versed in litigating a broad range of additional intellectual property and unfair competition-related issues, including trade secret misappropriation, breach of contract, FRAND licensing, and constitutional issues. He maintains an active pro bono practice and has represented pro bono clients in federal and state courts, the Court of Appeals for Veterans Claims, and before the Social Security Administration.

Matt frequently writes and speaks on a wide variety of intellectual property issues, and is a sought-after commentator who has been quoted in media such as The National Law Journal, Bloomberg, Reuters, CNBC, and Law360, among others. He is a co-host of Ropes & Gray’s IP(DC) podcast, which focuses on intellectual property developments emanating from Washington, DC. While at a previous law firm, Matt also co-founded and wrote for The Essential Patent Blog, a legal blog that focuses on issues relating to standard-essential patents. Prior to law school, Matt worked in various technical and engineering positions for Cooper Industries, an electrical products manufacturer, as part of Cooper’s Operations Leadership Program. 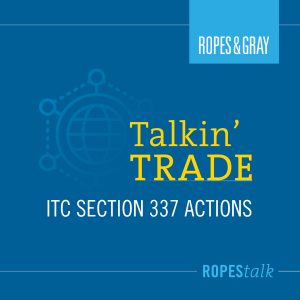 Matthew is also the host of Ropes & Gray’s podcast series Talkin’ Trade explores the world of Section 337 unfair import investigations at the U.S. International Trade Commission (ITC). Section 337 actions can provide valuable leverage for a company in a dispute with a foreign competitor, but we have found that many businesses and practitioners are either blissfully unaware of what these proceedings are or have only just vaguely heard about the ITC.

Talkin’ Trade: When Administrative Agencies Collide—Litigating in Parallel at the ITC and the PTAB

Over the past decade, the Patent Trial and Appeal Board (PTAB) has emerged as a critical and much-relied-upon tool for those facing patent infringement allegations. Some say that’s exactly what Congress intended with the America Invents Act—a defendant can file a validity challenge at the PTAB and get an expedited ruling on invalidity in a forum with specialized technical expertise and before judges with relevant technical backgrounds, at a lower cost than litigating validity issues in district court. And in fact, district courts will often stay infringement actions pending PTAB review of a patent at issue in a particular case.But the district courts and the PTAB are not the only fora in which patent issues are adjudicated. The United States International Trade Commission (ITC)—an independent, quasi-judicial federal agency based in Washington, DC—has become a forum of choice for patent owners seeking fast and effective relief for patent infringement.

The United States International Trade Commission (ITC) is an independent, quasi-judicial federal agency based in Washington, DC tasked with a variety of trade-related responsibilities. Perhaps most notably, the ITC is responsible for enforcing Section 337 of the Tariff Act, a trade statute designed to protect American industries from injuries caused by the importation of goods connected to unfair acts. The large majority of these so-called “Section 337 investigations” have focused on allegations of patent infringement, but the ITC can adjudicate disputes involving trademark infringement, copyright infringement, trade secret misappropriation, and even false advertising or antitrust claims.

Last week, in Golden v. United States, the Federal Circuit again rejected the argument that the cancellation of a patent in an America Invents Act (AIA) post-grant proceeding violates the Fifth Amendment’s Takings Clause. Just as it did in other cases raising Patent Trial and Appeal Board (PTAB)-related Takings Clause issues, the appellate court in Golden relied on its July 2019 decision in Celgene Corp. v. Peter (931 F.3d 1342 [Fed. Cir. 2019]), rejecting the Takings Clause argument on the merits. See Collabo Innovations, Inc. v. Sony Corp., 778 F. App’x 954, 961 (Fed. Cir. 2019); Enzo Life Sci., Inc. v. Becton Dickinson & Co., 780 F. App’x 903, 911 (Fed. Cir. 2019). But unlike these previous decisions, the Federal Circuit’s analysis in Golden also included discussion and resolution of an important threshold jurisdictional question—an issue that, as we argued in a November 2019 IPWatchdog piece, should have precluded the Federal Circuit from reaching the merits of the Takings Clause argument in Celgene in the first place.

Nearly four months ago, the Federal Circuit for the first time addressed the applicability of the Takings Clause of the Fifth Amendment to IPRs, holding in Celgene Corp v. Peter “that the retroactive application of inter partes review (IPR) proceedings to pre-America Invents Act (AIA) patents is not an unconstitutional taking under the Fifth Amendment” Celgene Corp. v. Peter, 931 F.3d 1342, 1362 (Fed. Cir. 2019). Since then, the court has continued to reject similar Patent Trial and Appeal Board (PTAB)-related Takings Clause claims on the merits. E.g., Collabo Innovations v. Sony Corp., No. 2018-1311 (Fed. Cir. Aug. 5, 2019). Unsurprisingly, Celgene filed a request for an en banc rehearing, and the government has just this week filed its response. Both Celgene’s en banc petition and the government’s response address the merits of Celgene’s constitutional claim—but as we hinted at in an earlier article analyzing the Celgene decision, there is a serious question whether the Federal Circuit should have even reached the merits of the Takings Clause issue in its panel opinion. In light of Supreme Court Takings Clause precedent, the Federal Circuit may want to either request supplemental briefing to decide whether it should have addressed the constitutional question in the first place, or potentially even revise the panel opinion and leave this issue to be decided in another case.

Since the Supreme Court upheld the constitutionality of inter partes review (IPR) a little more than a year ago in Oil States, several patent owners have brought other constitutional challenges to America Invents Act (AIA) trial proceedings. These cases have been slowly percolating at the Patent Trial and Appeal Board (PTAB), the U.S. Court of Federal Claims, and the U.S. Court of Appeals for the Federal Circuit. In many cases, however, the Federal Circuit has declined to address these constitutional claims on the merits, finding them unnecessary to resolve or insufficiently developed by the parties. But early last week, the Federal Circuit for the first time addressed the applicability of the Takings Clause of the Fifth Amendment to IPRs, holding in Celgene Corp. v. Peter, Case No. 18-1167 (Fed. Cir. 2019) “that the retroactive application of IPR proceedings to pre-AIA patents is not an unconstitutional taking under the Fifth Amendment.” While the court’s holding may appear on its face to forestall current and future Takings Clause challenges to AIA proceedings, its analysis leaves some questions unanswered, and may even provide a narrow path forward for future takings claims. Furthermore, given the Supreme Court’s predilection for addressing both AIA and Takings Clause issues, the Federal Circuit panel’s decision may not be the last word on this interesting issue.

Past Events with Matthew Rizzolo