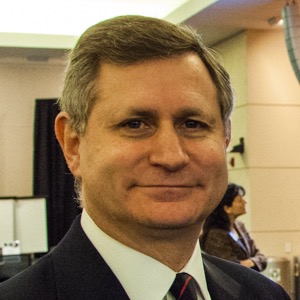 Manny Schecter is Chief Patent Counsel and Associate General Counsel at IBM. His accomplishments have helped IBM generate over $20B of income from IP while maintaining its position as the top annual US patentee for the last 23 consecutive years. Mr. Schecter is active in intellectual property policy matters including legislative, judicial, and patent office reform and he specializes in the application of technology to improving patent quality. He has worked his entire career, first as an engineer and then as an attorney, in various business units of IBM, achieving his current position in 2009.

Mr. Schecter is a graduate of Cornell University and the George Washington University Law School.

Over the years Mr. Schecter has authored or co-authored several articles for IPWatchdog.com, and has been interviewed on the record several times as well.

My congratulations to Kathi Vidal of Winston & Strawn on her confirmation as the new Undersecretary of Commerce for Intellectual Property and Director of the U.S. Patent and Trademark Office (USPTO) and her new role as advisor to the President and the administration on intellectual property matters. Undersecretary Vidal’s credentials are beyond merely impressive. Her capabilities and her new position afford her an opportunity to influence intellectual property policy at a magnitude few ever experience, including a profound opportunity to enhance diversity. It is well established that diversity unlocks innovation and that innovation is critical to American competitiveness, jobs, national security, and quality of life. One of the tenets of promoting diversity is providing leaders, role models, and mentors from all reaches of the community to encourage participation from others of similar backgrounds.

Closing the Gap Between Intellectual Property Awareness and Understanding

Intellectual property (IP) promotes innovation. The limited right to exclude others from copying patented inventions, copyrighted original works of authorship, and trademarked brands and logos encourages innovators to invest their time and money. IP appeals to our sense of fairness by discouraging or preventing counterfeiting, passing off, and other harmful takings of the fruits of investments in research, development, creativity and innovation, and is leveraged by entrepreneurs seeking start-up capital. Unfortunately, the general public lacks a true understanding of how IP fuels our innovation economy. Today, IP practitioners are bombarded with so many free newsletters about IP that we simply cannot read them all—it is no longer a function of getting access to information, but which sources of information are the best use of one’s time. The same is true for the general public, which is increasingly exposed to references about IP in social and news media, advertising, and other public channels. Unfortunately, those references to IP are not always accurate and often require explanation.

The patents discussed below are all landmark inventions and were conceived by inventors inducted into the National Inventors Hall of Fame (NIHF). Would these ground-breaking inventions, that helped set the course of humanity, be patentable today? … The point is that at first blush it’s not readily clear whether these patents would be found subject matter eligible, demonstrating that the uncertainty created by the Supreme Court with respect to patent subject matter eligibility has few bounds – even impacting the most celebrated inventions of our most honored inventors… If we cannot determine with reasonable certainty how all of these inventions would fare if judged under recent Supreme Court case law, then no one can truly teach Patent Subject Matter Eligibility 101.

As the challenge proceedings and the Patent Trial and Appeal Board mark their fifth anniversary, we should reflect on whether they have achieved their intended purpose. About a year ago I explained how inter partes review proceedings are no more a true alternative for litigation than the inter partes reexamination proceeding which they replaced and supposedly improved upon – nothing has happened since to change that view. Furthermore, a buffet of other meaty issues remains with respect to the post-grant challenge proceedings… I continue to support the original goals of the challenge proceedings and while changes in some areas are required, a wholesale restructuring of the procedures is not necessarily required. But I do look forward to changes that improve the balance between patentees and challengers.

What Direction Will the Incoming Director of the U.S. Patent and Trademark Office Need to Provide?

Overall, incoming USPTO leadership must have the capacity to see the “big picture” and weigh options for improving our innovation economy. Recognition that recent changes have weakened the patent system too much, and the leadership ability to make changes that achieve the appropriate balance between enforcing strong patents and limiting abusive enforcement of meritless patents, should be criteria in selecting the next Under Secretary of Commerce for Intellectual Property and Director of the USPTO.

Through the Looking Glass: Recent Federal Circuit Decisions Do Not Change the Need for Action on Alice

The few CAFC cases (since Alice) that have found inventions to be subject matter eligible is certainly a welcome development. These cases indicate that the CAFC does not believe all computer-related inventions are ineligible, and they provide helpful clues about what will weigh in favor of eligibility. Unfortunately, these cases do not demarcate the boundary between eligibility and ineligibility in any predictable, meaningful way. We still do not have an acceptable working definition of “abstract” and we likely never will. In these cases, the CAFC applied a variety of different, often inconsistent, rationale for finding the inventions at issue to be subject matter eligible.

The impact of Alice has been just what one would expect. The decisions of the USPTO examining corps, USPTO Patent Trial & Appeal Board, and lower courts have been wildly inconsistent. Far too many worthy inventions are being lost. Perhaps worse, the predictability innovators and investors in research and development require to effectively navigate the patent system has been eliminated. Change is sorely needed and overdue.

Have We Met the Challenge of Creating Effective Post Grant Challenge Proceedings?

IPRs offer many improvements compared to inter partes reexamination[12]. However, the statistics reveal that IPRs are no more of a true alternative for litigation than the challenge proceeding which they replaced and supposedly improved upon – at least not yet, but with all of the publicity about the high rate of invalidation it is hard to imagine that patent challengers just need more time to gain confidence in IPRs. These statistics combined with the relationship between IPR behavior and the increasing phenomenon of efficient infringement suggest that the post grant challenge proceedings as currently implemented are not a substitute for litigation and may, unfortunately, instead actually promote litigation.

Past Events with Manny W. Schecter