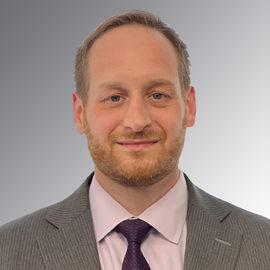 Brandon Helms joined AddyHart P.C. as a partner in July 2022 with 15 years of experience as an attorney in government and private practice. Most recently, he served for eight years as an Assistant U.S. Attorney in the Eastern District of Michigan, where he acted on behalf of the United States in both criminal and civil litigation.

Prior to that, Helms spent three years as a senior associate at AmLaw 100 firm Steptoe & Johnson LLP in Chicago, where he first-chaired and second-chaired multiple jury and bench trials in federal court; litigated patent infringement actions involving semiconductor technology; litigated Hatch-Waxman (ANDA) cases on behalf of generic drug companies; drafted discovery documents, motions, and briefs through all phases of district court and appellate litigation; and took and defended depositions of fact and expert witnesses.

Throughout his career, Helms has prioritized pro bono service. At Steptoe, he initiated the firm’s involvement with the Domestic Violence Legal Clinic. He has also represented pro bono clients in Title VII discrimination lawsuits.

Helms earned his J.D. at DePaul University College of Law, where he was an associate editor of the DePaul Law Review. He earned a B.A. in chemistry from Carthage College in Kenosha, Wisconsin. He works in our Chicago office.


Check back soon for more articles by Brandon Helms

Past Events with Brandon Helms