“Patent rights that have a stronger certainty of validity under Section 101 and a better chance at obtaining injunctive relief against infringers would better leverage the competition that’s already prevalent in the high-tech marketplace.” 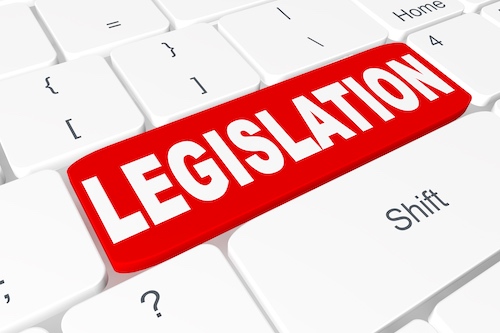 On January 20, the Senate Committee on the Judiciary voted 16-6 to advance S. 2992, the American Innovation and Choice Online Act, out of committee and toward a full vote on the floor of the U.S. Senate. If passed, the bill would give the Federal Trade Commission (FTC), the U.S. Attorney General and state attorneys general new powers to bring antitrust enforcement actions against major online platforms that are alleged to be engaging in discriminatory conduct by preferencing their own products and services over competing products and services that are also available on those platforms.

The American Innovation and Choice Online Act was introduced in mid-October by Senators John Kennedy (R-LA), Amy Klobuchar (D-MN) and Chuck Grassley (R-IA). The bill is part of an increasing effort by members of both major parties to address perceived competition issues posed by major search engine, social media and e-commerce platforms. This particular bill was designed to prevent Big Tech firms from not only preferencing their own products and services but also abusing platform interoperability requirements to prevent competitors from using platforms, requiring businesses to buy certain products or services for preferred placement, misusing another company’s business data to compete and biasing search results.

Online platforms meeting the bill’s definition of “covered platform” would have to comply with provisions against conduct that would be unlawful under the bill. An online platform could qualify as a covered platform if, at any point during the year prior to an alleged violation of the act, it has at least 50 million U.S. monthly active users or at least 100,000 monthly active business users. The platform would also have to be controlled by a person who has either net annual sales or a market capitalization greater than $550 million at some point within two years prior to an alleged violation, and is a critical trading partner for any good or service sold on the platform. A “critical trading partner” under the act is any person having the ability to restrict or materially impede the access of a business user to either its customers or a tool or service that the business needs to effectively serve its customers.

The FTC and the U.S. Department of Justice (DOJ) would have to jointly designate an online provider and issue notice of the designation in the Federal Register. The designation would last for a period of seven years regardless of any change in ownership, although the FTC and the DOJ have the authority to rescind a covered platform designation at any time. Companies who operate designated covered platforms would also have the opportunity to petition the FTC and DOJ to reconsider the designation if there’s evidence that the platform no longer meets the criteria to qualify as a covered platform. Covered platform operators can also make out an affirmative defense under the bill if the alleged discriminatory conduct would not result in material harm to the competitive process by restricting or impeding the legitimate activity of business users, or the conduct was narrowly tailored, could not be achieved through less discriminatory means and was necessary to prevent a violation of federal or state law, protect user privacy or the security of non-public data or the covered platform, or maintain or enhance the core functionality of the covered platform.

Remedies for violations of the American Innovation and Choice Online Act include civil penalties that could amount up to 15 percent of the total U.S. revenue of the person charged with unlawful conduct during the period in which the act was being violated. The FTC, the U.S. Attorney General and state AGs can also pursue injunctive relief in U.S. district court, and repeat offenders, including any CEO or a corporate officer for a company committing multiple violations of the act, could be ordered by a court to forfeit any compensation earned during the 12 months preceding or following a suit filed by the FTC, DOJ or AGs under this act. Enforcement officials could also obtain emergency relief in the form of a 120-day temporary injunction if they can show claims that a covered platform took an action that would violate the bill and the action impairs the ability of business users to compete with the covered platform’s operator.

Appetites for stronger antitrust enforcement against Big Tech companies have been growing since the latter stages of the Trump Administration. The DOJ joined AGs from 11 states to file the first antitrust suit against Google’s alleged anticompetitive practices in online search services and search advertising just weeks before the 2020 Presidential election took place. In the days leading up to the Senate Judiciary’s approval of the American Innovation and Choice Online Act, political news outlet Axios reported that top executives from Apple and Google engaged in strong lobbying efforts to stop the bill, with both companies arguing that the bill’s passage would undermine data privacy and security features that help consumers.

From an intellectual property rights standpoint, there’s a lot to be desired from both the American Innovation and Choice Online Act, as well as the general groundswell of support for increased antitrust enforcement against Big Tech. Patents have many pro-competitive benefits that are being completely ignored by those drafting bills to increase antitrust enforcement or enforcing current U.S. antitrust law against Big Tech firms. Patent rights that have a stronger certainty of validity under Section 101 and a better chance at obtaining injunctive relief against infringers would better leverage the competition that’s already prevalent in the high-tech marketplace, but that’s been an impossible conversation to have in D.C. Instead, bills like the American Innovation and Choice Online Act advance, giving antitrust regulators more power while doing very little to address how those companies are able to achieve market dominance by copying the technologies of other firms with impunity.

Along with advancing the American Innovation and Choice Online Act, the Senate Judiciary had also scheduled discussion of S. 2710, the Open App Markets Act. Similarly, this bill applies existing U.S. antitrust law under the FTC Act or the Clayton Act for enforcement actions against companies that engage in anticompetitive practices in app stores, such as requiring app developers to use a favored in-app payment system for accessing consumers through that app store. While scheduled for the same hearing in which the American Innovation and Choice Online Act was advanced, there has been no further action on the Open App Markets Act as of this writing.