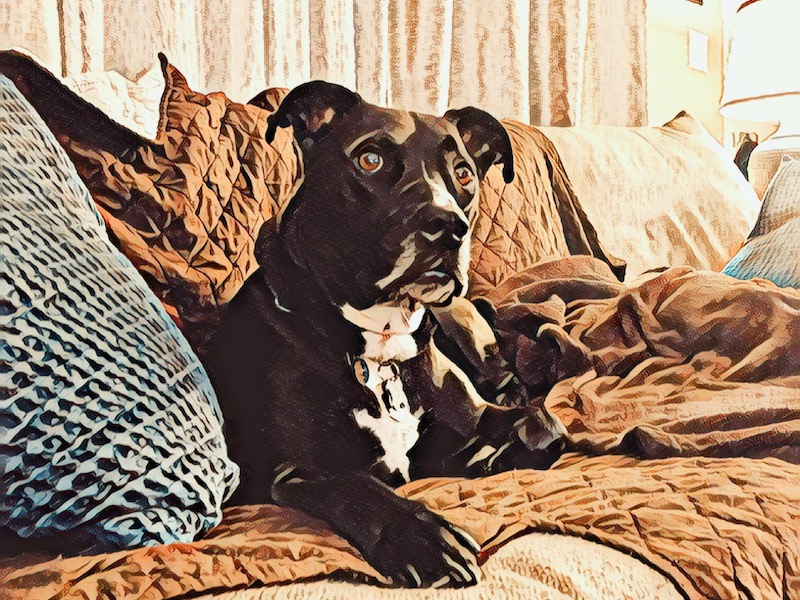 Colby Jack (aka moose or moo) is Eileen McDermott’s seven-year old American Staffordshire Terrier/ lab mix who loves hiking, swimming, and dares you to take his corner of the couch.

This week in Other Barks & Bites: China unveils its goals for improving IP rights during the country’s 14th Five-Year Plan, even as the country’s copyright administration announces a ban on most exclusive music licensing deals; the Federal Circuit affirms the validity of Novartis patent claims over Chief Judge Moore’s dissent over the majority’s treatment of the written description requirement; the U.S. International Trade Commission (ITC) rules that Google audio players infringe upon Sonos patents and enters a limited exclusion order against their importation; Senator Tillis announces his intention to vote in favor of confirming Kathi Vidal as USPTO Director; hedge funds shed tech stocks at the highest rate in more than 10 years; Allele settles its patent infringement suit against Pfizer and BioNTech over their development of a COVID-19 vaccine; and French data protection regulators announce fines against American tech firms over their use of tracking cookies, including a record fine against Google.

French Data Protection Regulators Issue Fines Against Google, Facebook Over Use of Cookies – On Thursday, January 6, officials with France’s National Commission for Information Technology and Freedom (CNIL) announced that American tech giants Google and Facebook were ordered to pay fines totalling €210 million ($237 million USD), including a record fine of €150 million ($170 million USD) against Google, over the companies violations of the EU’s General Data Protection Regulation by their use of cookies to track users online.

USPTO Announces Deferred Subject Matter Eligibility Response Pilot – On Thursday, January 6, the U.S. Patent and Trademark Office issued a notice in the Federal Register announcing the establishment of a Deferred Subject Matter Eligibility Response Pilot Program in which participants that have filed nonprovisional patent applications will be permitted to defer responses on Section 101 subject matter eligibility rejections until other patentability issues under Sections 102, 103 and 112 have been addressed.

Chinese National Pleads Guilty in Conspiracy to Steal Monsanto Trade Secret – On Thursday, January 6, the U.S. Department of Justice announced that Chinese national Xiang Haitao pled guilty to charges that he conspired to steal a trade secret from Monsanto by transferring data to a memory card and attempting to take it out of the country to benefit the government of the People’s Republic of China.

Sen. Tillis to Vote In Favor of Kathi Vidal’s Nomination as USPTO Director – On Wednesday, January 5, Senator Thom Tillis (R-NC) announced that he would be voting in favor of confirming Kathi Vidal, President Biden’s nominee to serve as the Director of the U.S. Patent and Trademark Office, calling Vidal “the exact type of visionary leader we need to succeed Andrei Iancu.” The Senate confirmation vote on Vidal’s nomination, originally scheduled for the morning of Thursday, January 6, will be rescheduled.

Chinese Government Outlines IP Goals in Country’s 14th Five-Year Plan – On Tuesday, January 4, China’s National Intellectual Property Administration (CNIPA) issued an outline of the nation’s plans to improve IP rights over the course of the government’s 14th Five-Year Plan, including amendments to the country’s Anti-Monopoly Law, improvements to legal protections for IP, improved quality in patent and trademark examination as well as greater participation in global IP matters and activities of the World Intellectual Property Organization, including participation in the annual World Intellectual Property Day.

Chief Judge Moore Dissents From CAFC Majority Affirming Written Description Ruling for Novartis – On Monday, January 3, the U.S. Court of Appeals for the Federal Circuit entered a precedential ruling in Novartis Pharmaceuticals Corp. v. Accord Healthcare, Inc. in which the appellate court affirmed the District of Delaware’s ruling that Novartis patent claims covering a method to treat relapsing remitting multiple sclerosis (RRMS), finding no clear error in Delaware’s ruling that the challenged claims did not fail the written description requirement of 35 U.S.C. § 112(a). In a dissent, Chief Judge Kimberley Moore argued that the panel majority contradicted Federal Circuit precedent by “dramatically expands a patentee’s ability to add, years after filing a patent application, negative claim limitations that have zero support in the written description.”

Ninth Circuit Reverses Class Certification in Wolfgang’s Vault Copyright Case – On Monday, January 3, the U.S. Court of Appeals for the Ninth Circuit issued a decision in Kihn v. Bill Graham Archives LLC in which the appellate court reversed the Northern District of California’s certification of composer and performer classes for a class action suit involving copyright infringement claims against the operators of the live concert recording archive Wolfgang’s Vault, finding that individual issues predominate Kihn’s claims and that class-wide injunctive relief was inappropriate based on the record.

USITC Rules Google Audio Players Infringe Upon Sonos Patents – On Thursday, January 6, the U.S. International Trade Commission issued a ruling finding that Internet tech giant Google had infringed upon claims from a series of five patents owned by speaker tech developer Sonos. The agency also issued a limited exclusion order (LEO) and a cease-and-desist order (CDO) preventing Google from marketing the infringing products in the U.S., and set a 100 percent bond for any importations of infringing products by Google during the period of Presidential review.

USPTO Establishes Administrative Sanctions Process for Violating Trademark Rules – On Wednesday, January 5, the U.S. Patent and Trademark Office issued a notice in the Federal Register announcing that the Commissioner of Trademarks has established an administrative process for investigating trademark submissions that appear to violate the agency’s Trademark Rules of Practice, including issuances of orders to show cause and final decisions on orders for sanctions.

CRB Requests Petitions to Participate in Business Establishments IV Ratemaking – On Wednesday, January 5, the Copyright Royalty Board issued a notice in the Federal Register announcing the commencement of a proceeding to determine royalty rates and terms for the transmission of ephemeral copies of sound recordings for facilitating audio transmission to business establishments under 17 U.S.C. § 112(e)(1). The CRB’s notice indicates that petitions to participate are due on February 4.

Allele Drops Patent Suit Against Pfizer Over COVID-19 Vaccines – On Tuesday, January 4, a joint motion to dismiss entered in the Southern District of California terminated a patent infringement suit filed by Allele Biotechnology against Pfizer and BioNTech over their development of a COVID-19 vaccine that allegedly used Allele’s patented fluorescent protein during research and development of the vaccine.

Hedge Funds Shed Tech Stocks at Fastest Rate in 10 Years – On Thursday, January 6, CNBC reported that the four trading sessions between December 30 and January 4 saw the largest total sale of tech stocks by the hedge fund community in a decade, in terms of total dollars, in large part over concerns that rising bond yields could increase debt costs and hinder growth for tech firms.

Stryker Corp. Buys Vocera for $3B to Bolster Digital Patient Communications – On Thursday, January 6, medical device firm Stryker Corp. announced that it had agreed to purchase mobile telecom firm Vocera Communications for about $3.09 billion, about $2.97 billion of which will be in cash, in a bid to improve Stryker’s digital patient outreach operations.