“What is preventing us from having a truly autonomous car? Software. How else can all of that data be processed so the car knows whether an obstruction is a pothole or a three-year old?… [O]nce someone solves that problem, it’s an abstract idea.”- Raymond Millien 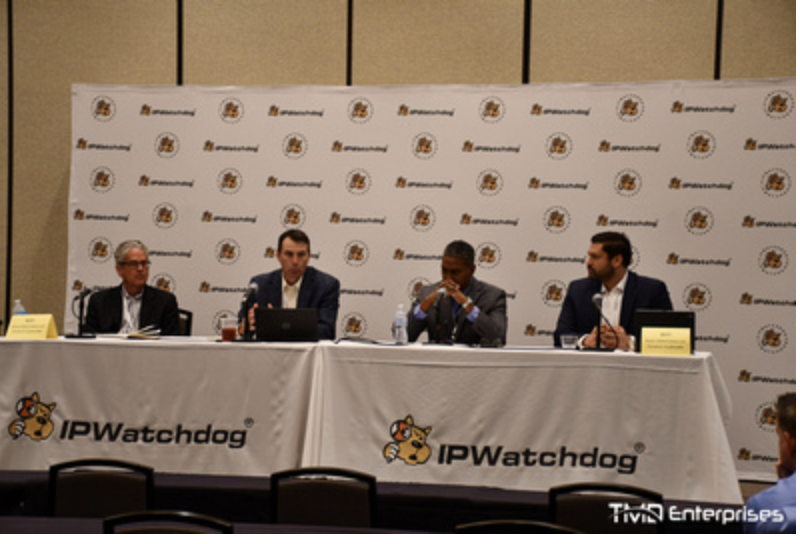 On Day 2 of IPWatchdog LIVE, a lively morning panel was convened on the subject of “Is the Federal Circuit Killing Software Patents?” Though that question was answered in the first few seconds of the panel session, the following hour of discussion yielded various ideas on how disastrous jurisprudence on Section 101 subject matter eligibility could be addressed at the Federal Circuit. Speaking on this panel was Robert Stoll, Co-Chair of the IP Group at Faegre Drinker and Former Commissioner of Patents, USPTO; Russ Slifer, Principal at Schwegman Lundberg & Woessner and Former Deputy Director, USPTO; Raymond Millien, CEO at Harness Dickey; and Benjamin Cappel, Partner at AddyHart P.C.

“We could easily answer this question ‘yes’ and be done with the session,” said Stoll. The statement elicited no small amount of laughter, and the rest of the panel clearly agreed with the sentiment. Though the Federal Circuit was established in the early 1980s with a mission of having patent law decided uniformly by judges with scientific backgrounds, Slifer noted a 1984 article by Judge Richard Posner that pointed out how, with any court specialized in its subject matter jurisdiction, it becomes easier for one of two opposing viewpoints on legal doctrine to win out than in the regional circuit courts. Though Slifer believed that the Federal Circuit was staffed with circuit judges fulfilling the scientific mission of the court through its first 20 years of existence, several Federal Circuit appointees over the last 15 years have had different backgrounds than earlier judges and often wind up on panel decisions which have tended to limit patent rights in software and other sectors.

Millien did not mince words in discussing the problematic nature of Section 101 jurisprudence on software, specifically in the context of autonomous driving:

I’m going to say something controversial: All of the hardware needed for autonomous driving has already been invented. What is preventing us from having a truly autonomous car? Software. How else can all of that data be processed so the car knows whether an obstruction is a pothole or a three-year old? We’ve all been doing that since we first started driving at the age of 16 and it takes a millisecond in the brain. We cannot solve that problem without software, but once someone solves that problem, it’s an abstract idea.

Later in the discussion, Millien noted a recent article he wrote for IPWatchdog in which he provided data showing that 63% of U.S. utility patents issued in the first half of 2021 were software-related. By comparison, less than 50% of EPO patents and just over 40% of Chinese patents granted during that period of time were software-related.

Although the Supreme Court in Alice v. CLS Bank, the 2014 decision that has so beleaguered the patent eligibility of software, cautioned that the holding should be interpreted narrowly “lest it swallow all of patent law,” Slifer felt that such consumption had been reached by 2018, with the Federal Circuit’s Section 101 decision in ChargePoint v. SemaConnect. While the makeup of the Federal Circuit is an issue given the panel-dependent nature of Section 101 analysis in many cases, Slifer believed there was more hope for a legislative rollback of judicially-created subject matter exceptions through Congress than by replacing Federal Circuit judges.

Cappel: No Chance for Change by Explaining Section 101 to CAFC Judges

Cappel indicated that he couldn’t understand why the Federal Circuit was analyzing issues under Section 101 that are obviously more appropriate under a Section 103 analysis. “But these judges are smart people and they’re obviously doing it for a reason,” Cappel said. “We can’t expect to explain Section 101 to them and have them go, ‘Oh, now I get it.’” He believed that while members of the patent bar could advocate for meaningful change through Congress, Supreme Court decisions or by swaying public opinion, Cappel didn’t think that such change could be addressed directly at the Federal Circuit.

The panelists discussed that one of the biggest issues in swaying public opinion is getting people to understand the actual real-life implications of detrimental software patent policy without getting bogged down in technical and legal details that cannot engage with much of the public. “The public cares about independent inventors,” said Cappel. “This is why people love Shark Tank. You see the little guy who works 9 to 5, has a great idea, and he goes on to be successful enough to take care of his family. We need to point out that’s the guy who got screwed.”

Millien was also succinct in conveying the public relations problem for fixing software patent policy in a pro-inventor and pro-consumer way. “I know we’re in an IP field and we talk about IP rights, but here’s a concept for all of us highly paid people to understand: property doesn’t have rights, people have rights,” he said. Instead of talking in raw numbers, like pointing out that more than $300 billion has been invested into autonomous vehicle startup, Millien urged the audience to educate others that large investment helps inventors to feed their families and support their children. “We may represent X company or Y company, but we have to remember the people behind these companies.”