“A change in patent claims can remove the rationale for applying assignor estoppel…. If Hologic’s new claim is materially broader than the ones Truckai assigned, then Truckai could not have warranted its validity in making the assignment.” – Majority opinion 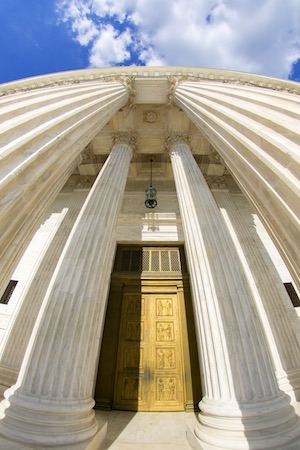 The U.S. Supreme Court ruled 5-4 this morning in Minerva Surgical, Inc. v. Hologic, Inc., Cytyc Surgical Products, LLC that the doctrine of assignor estoppel”—which bars the assignor of a patent from later attacking the patent’s validity—“is well grounded in centuries-old fairness principles…[but] applies only when the assignor’s claim of invalidity contradicts explicit or implicit representations he made in assigning the patent.” Thus, while the Court rejected Minerva’s request that the doctrine be abandoned, the judgment of the U.S. Court of Appeals for the Federal Circuit (CAFC) was vacated and the case remanded to address “whether Hologic’s new claim is materially broader” than the ones that were assigned.

The case stems back to a CAFC ruling in April 2020 that assignor estoppel barred Minerva from asserting invalidity of its assigned patents in district court, after Hologic sued Minerva for infringement of those patents based on a claim that had been broadened via a continuation application after its assignment. Csaba Truckai co-founded the company NovaCept, Inc., which was acquired by Cytic Corporation and, subsequently, by Hologic. Truckai was named as an inventor on the patents-in-suit, U.S. Patent No. 6,872,183 (the ‘183 patent) and U.S. Patent No. 9,095,348 (the ‘348 patent), which were directed to a method of detecting perforation in a uterus and a device for treating a uterus, including eliminating the buildup of steam and liquid at an ablation site, respectively. While still undergoing prosecution, Truckai assigned his interests in the applications that led to the ’183 and ’348 patents to NovaCept, now Hologic. Truckai later left NovaCept and founded Minerva, where he served as the President, CEO, and a member of the Board of Directors. Truckai and others at Minerva developed the Endometrial Ablation System (EAS), which was approved by the FDA for the same indication as Hologic’s system.

In April 2021, during oral argument, the justices seemed to lean toward the approach taken in today’s opinion. Justice Kagan wrote for the majority, which was joined by four other justices. Justice Alito filed a dissenting opinion and Justice Barrett also filed a dissent, which Justices Thomas and Gorsuch joined.

The majority explained that in Westinghouse Elec. & Mfg. Co. v. Formica Insulation Co., 266 U. S. 342 (1924) the Court endorsed assignor estoppel based on “a full ‘forty-five years of judicial consideration and conclusion,’” but limited it by holding that the assignor can argue about how to construe the claims, for instance. The Court rejected Minerva’s argument that the doctrine should be eliminated, and in fact, already has been. Minerva said that 1) Congress repudiated it in the Patent Act of 1952; 2) the Court’s post-Westinghouse cases “leave no room for the doctrine to continue”; and 3) that assignor estoppel “imposes” too high a “barrier to invalidity challenges” and so keeps bad patents alive.

On the first point, the Court explained that the 1952 Patent Act language Minerva relied on—“’[i]nvalidity’ of the patent ‘shall be [a] defense[] in any action involving’ infringement”—does not mean that assignor estoppel was abrogated by the Act. “Similar language, entitling a defendant to plead invalidity in any infringement action, was in the patent statute when Westinghouse was decided,” said the Court. Such a view would conflict with other common-law preclusion doctrines, such as equitable estoppel, collateral estoppel, res judicata, and law of the case. The Court held that assignor estoppel was a “background principle of patent adjudication” at the time of the Act, “and Congress gave no indication of wanting to terminate it or disturb its development. Nor has Congress done so since that time.”

As to point two, Scott Paper Co. v. Marcalus Mfg. Co. and Lear, Inc. v. Adkins, 395 U. S. 653 (1969) did not, as Minerva contended, “eliminate,” “repudiate” or “eviscerate” assignor estoppel, but instead retained it and policed the doctrine’s boundaries, said the Court. The Scott Paper decision “decline[d] to apply assignor estoppel in a novel and extreme circumstance,” and Lear dealt with licensee estoppel, which is distinguished, since “the licensee is a buyer of patent rights, not a seller, [and] has given no assurances of the patent’s worth.”

Lastly, the contemporary need to “weed out bad patents” does not justify eliminating assignor estoppel because the doctrine is still rooted in principles of fairness and “reflects a demand for consistency in dealing with others.” The majority continued:

When a person sells his patent rights, he makes an (at least) implicit representation to the buyer that the patent at issue is valid—that it will actually give the buyer his sought-for monopoly. In later raising an invalidity defense, the assignor disavows that implied warranty.

But turning to the limitations on the doctrine, the majority went on to explain that, most relevant to the facts of the present case, “a change in patent claims can remove the rationale for applying assignor estoppel.”  Since the claim at issue had been broadened after Minerva/Truckai assigned the patents, the Federal Circuit’s conclusion that it was “’irrelevant’ whether Hologic had expanded the assigned claims” was wrong. “If Hologic’s new claim is materially broader than the ones Truckai assigned, then Truckai could not have warranted its validity in making the assignment. And without such a prior inconsistent representation, there is no basis for estoppel,” wrote the Court.

Just Alito objected to the majority’s (and Justice Barrett’s) refusal to consider whether Westinghouse should be overruled. “Not one word in the patent statutes supports assignor estoppel, and the majority does not claim otherwise,” Alito wrote. He would have dismissed the case as improvidently granted.

Justice Barrett’s dissent said that the case turns on whether or not the Patent Act of 1952 incorporates the doctrine, which could happen if: “(1) Congress ratified Westinghouse when it reenacted the assignment provision in 1952, or (2) if assignor estoppel was part of the well-settled common-law backdrop against which Congress legislated in 1952.” But Barrett found that neither theory succeeds.