“These statements from the OD should come as a breath of fresh air to pharmaceutical innovators who rely on Markush claims, and are contrary to a proposed unascertainable burden to provide the synthesis of every included compound. Chemistry has proceeded by analogy for hundreds of years, and in fact, forms the bedrock for normal chemical practice and progression.”

Note: The author represents NuCana on selected matters. She also drafted the Idenix specification, but did not obtain or litigate the Idenix claims, as she joined GSK in 2006. 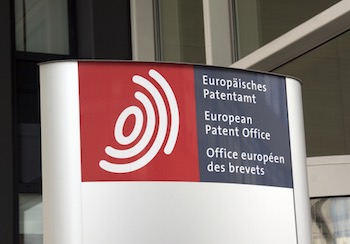 On April 7, 2021, the European Patent Office (EPO) Opposition Division (OD) issued a comprehensive written decision in the Opposition by Gilead Sciences, Inc. against NuCana plc’s European Patent No. B-2 955 190, upholding amended compound claims that include Gilead’s blockbuster hepatitis C drug, Sovaldi (sofosbuvir). The claims were upheld over various arguments made by Gilead, including an assertion that the NuCana patent did not teach the skilled worker how to make the nucleoside component of Sovaldi (which is a nucleotide phosphoramidate). Gilead alleged, as it did in the myriad of global Idenix litigation cases, that a skilled person in 2003 who tried to make the nucleoside of Sovaldi “would be required to undertake extensive experimentation, if indeed he would be able to succeed at all. This represented an undue burden.”

The OD disagreed, after review of 115 Exhibits that included a number of declarations with experimental evidence submitted by NuCana and a 10-hour Oral Hearing, held February 8, 2021. Quite to the contrary, the OD agreed with NuCana’s argument that a skilled person could have synthesized the nucleoside of Sovaldi using no more than common general knowledge following an analogous route based on the synthesis of the well-known Eli Lilly drug Gemcitabine. The OD held that the “analogous Gemcitabine route” to make the nucleoside of Sovaldi is a “one-way street”, with no need for the skilled person to make choices, and therefore did not create an undue burden (p.32). The OD also noted that, while NuCana provided experimental evidence establishing the analogous Gemcitabine route, Gilead did not respond with experiments to the contrary. The only material difference between Gemcitabine and the nucleoside in Sovaldi is one F for a CH3   at the 2’ position of the sugar moiety in the chemical structure. 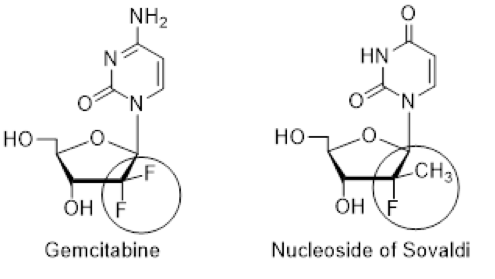 NuCana’s late Chief Scientific Officer, Professor Chris McGuigan (Cardiff University), was the creator of the “phosphoramidate” prodrug chemistry to deliver derivatized nucleosides to cells in a manner that generates the required active triphosphate moiety for biological activity against cancer or viruses. Both Sovaldi and the COVID drug Veklury (Remdesivir) are phosphoramidated nucleotide prodrugs. NuCana’s Acelarin (NUC-1031) is a phosphoramidate of Gemcitabine currently in a global Phase III study for patients with biliary tract cancer. McGuigan’s untimely death in 2016 was reported by BBC News, which hailed him as “one of the UK’s leading scientists in the field of anti-cancer therapy.” The opposition focused on the ability to synthesize the core nucleoside of the claimed compounds, rather than the phosphoramidate prodrug portion.

Gilead attempted to rely on the EPO Technical Board of Appeal decision on the Idenix patent, as well as the judgment on  the same patent from the UK High Court in EWHC 3916 (Pat) and the UK Court of Appeal Decision of November 2016, all ruling that the Idenix patent (which claimed priority to a provisional filed in May 2000) was not enabled because it did not include sufficient disclosure as to how to make the Sovaldi nucleoside, and submitted extensive evidence to the OD from these court actions.

The OD specifically addressed the Idenix cases, concluding those decisions are not res judicata for the unrelated NuCana case, as the two specifications have different disclosures and claims. In contrast to the Idenix decision, the OD held that the NuCana patent, which the OD pointed out also does not include a synthesis of the nucleoside in Sovaldi, is nonetheless enabled for Sovaldi because it highlights Gemcitabine phosphoramidates.

Gemcitabine is an old anti-cancer drug from Eli Lilly that was patented in 1983 and first approved by the U.S. Food and Drug Administration (FDA) in 1996 for patients with pancreatic cancer. Lilly published its extensive process development research for the manufacture of Gemcitabine in the 1990s. The OD found that Sovaldi could have been made in 2003 by more than one separate “analogous Gemcitabine” route based on the Lilly pre-1990s scientific literature on how to make Gemcitabine. The OD decision also provides very useful guidance for pharmaceutical innovators on the use of chemistry by analogy to support Markush claim scope, discussed below.

Specifically, after the skilled worker noted the clear structural similarity between Gemcitabine and the nucleoside in Sovaldi, it would be normal to look at the Merck Index, which the OD referred to as a “compendium for common general knowledge in pharmaceutically active substances”. The 2001 Merck Index on Gemcitabine references the Lilly synthesis of Hertel (J. Org. Chem. 53, 2406 (1988)) and U.S. Patent 4,808,614, which is based on a Reformatsky reaction, providing the “one-way street”. NuCana submitted a Declaration with experimental evidence that demonstrated use of the analogous starting material indeed produces the nucleoside in Sovaldi. Likewise, Lilly’s process improvement on the Hertel reaction was the Weigel aldol reaction, which NuCana also showed by analogous experimentation leads to Sovaldi (Weigel, et al., J. Org. Chem. 1997, 62, 6108-6109).

The OD provided helpful guidance on when a patent applicant can rely on chemistry by analogy to support a Markush formula. “OD found the evidence of the analogous Gemcitabine route being feasible without having to make choices – neither on the starting material, nor on the reagents or conditions – convincing and could not follow [Gilead’s] view, that performing an analogous 8-10 step synthesis represented an undue burden, even though the analogous route passed through many undisclosed steps.” (p.22).

It cited to case law of the Boards of Appeal at II C.6.6.5 on “undisclosed steps”, which states, “There is no requirement in the EPC [European Patent Convention] that the claimed invention may be carried out with the aid of only a few additional non-disclosed steps. The only essential requirement is that each of those additional steps be so apparent to the skilled person that, in light of his common general knowledge, a detailed description of them is superfluous. (T 721/89)”. The same applies for the time that is needed to perform these undisclosed steps.

Further, the OD considered the analogous Gemcitabine route “in line with the conventional practice of Markush formula claims, where never are all variants, but only a reasonable amount of examples disclosed, and where the underlying assumption is, that further examples can be made in an analogous fashion to the disclosed examples… Further, Gilead had not provided evidence or shown otherwise that there were unsurmountable difficulties in applying the analogous Gemcitabine route.”

These statements from the OD should come as a breath of fresh air to pharmaceutical innovators who rely on Markush claims, and are contrary to a proposed unascertainable burden to provide the synthesis of every included compound. Chemistry has proceeded by analogy for hundreds of years, and in fact, forms the bedrock for normal chemical practice and progression.

The analogous Lilly Gemcitabine routes to Sovaldi were not discussed in the Gilead/Idenix cases, nor was experimental evidence provided, as now done by NuCana.

Merck acquired Idenix in 2014 and took over the Idenix litigation. The UK Court of Appeals confirmed the denial of Markush style Idenix claims in EP 1 523 489 in a November 2016 decision.

The U.S. Court of Appeals for the Federal Circuit (CAFC) in October 2019 ruled that claims asserted by Merck/Idenix against Gilead’s sale of Sovaldi were nonenabled, as they covered too many compounds and there were not syntheses presented for all of the compounds within the scope of the formula.

Amicus briefs were filed in support of Merck/Idenix in its Petition for Certiorari to the U.S. Supreme Court by GlaxoSmithKline, Amgen and Intellectual Property Law Professors (submitted by Professor Mark Lemley at Stanford University). Yes, indeed, this was one of the rare cases that Lemley took the side of pharmaceutical innovators (thank you Mark, and of course thank you GSK and Amgen). All three amici showed concern that the CAFC was creating a bright-line test on how many compounds can be included in a generic/functional description in a chemical claim. The Idenix litigation is now over, with the denial of certiorari by the Supreme Court in January 2021.

Meanwhile, the litigation  in Europe between NuCana and Gilead will continue. The OD’s decision is subject to appeal to the European Technical Boards of Appeal.

On February 12, 2021, Gilead filed a lawsuit against NuCana in the UK Patents Court seeking to revoke the ‘190 patent in the UK. NuCana has now counterclaimed for infringement by the sale of Sovaldi as well as its combination products, Harvoni, Vosevi and Epclusa, in the UK.

And on Friday, April 16, 2021, NuCana sued Gilead Sciences Ireland UC and Gilead Sciences GmbH in the German Regional Court of Dusseldorf for patent infringement for sale of the same Sovaldi products in Germany. Germany has a bifurcated patent litigation system, and so the infringement action will proceed independently of any validity challenge. In Germany, validity can only be challenged in a separate proceeding in the Federal Patent Court.