“During the course of our review, we identified three recent instances in which the practice of dismissing petitions as untimely was expanded to dismiss timely-filed petitions.” 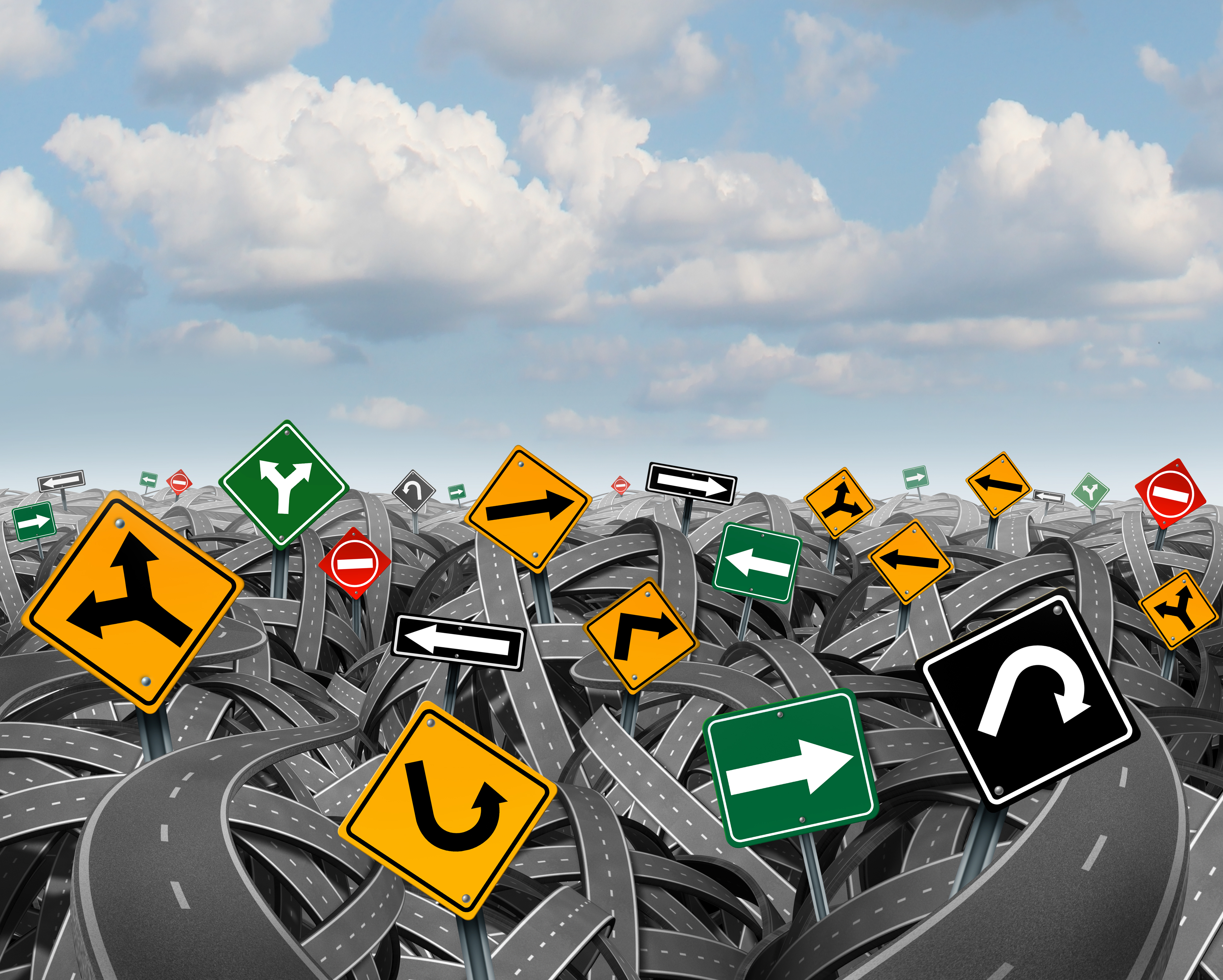 While researching the newly codified Manual of Patent Examination Procedure (MPEP) Section 706.07(b) (see Law360 article, First Action Final Rejection articles Part I and Part II), we noticed some petitions filed more than two months after the final Office action mail date were decided on their merits while other petitions were dismissed as untimely.

Here, in Part III of the series, we examine the U.S. Patent and Trademark Office’s (USPTO’s) seemingly arbitrary treatment of petitions filed more than two months after the final Office action. We also expose procedural traps where deciding officials side-step addressing the merits by dismissing certain ones as untimely. Importantly, we uncovered recent changes in how petitions are decided and identified an increased number and manner of petitions dismissed by the USPTO as untimely.

37 C.F.R. 1.181(f) sets a two-month period for filing a petition pertaining to a premature Office action:

Any petition under this part not filed within two months of the mailing date of the action or notice from which relief is requested may be dismissed as untimely, except as otherwise provided.

MPEP Section 1002 further indicates “the two-month period is not extendable under 1.136(a) since the time is within the discretion of the Director of the USPTO” yet Section 1.181(f) includes permissive language suggesting optional or discretionary enforcement (the petition “may be dismissed as untimely”). (Emphasis added). The same interpretation is provided by the Office of Petitions.

We examined a collection of petitions pertaining to premature final Office actions to identify those filed after the two-month period of Section 1.181(f) (late-filed) petitions which were either treated on their merits or dismissed as untimely. A search query of the Petition.ai database using the phrase “dismissed as untimely” quickly identified other types of petitions which did not receive decisions on their merits.

We identified and analyzed 24 decisions, including 15 dismissed as untimely and nine which constructively waived the Section 1.181(f) time period to render a decision on their merits. Collectively, the 24 Decisions, coded AA-XX, were directed to petitions filed by 21 different patent practitioners and signed by 15 different deciding officials from seven Technology Centers (TCs) and from the Office of Petitions. Part II’s Decisions O and S are included here as Decisions JJ and KK.  Decision VV requested withdraw of a non-final Office action while all other decisions were directed to the propriety of a final Office action. Interestingly, Decisions UU-XX illustrated new manners in which petitions filed within the two-month window were being dismissed as untimely. 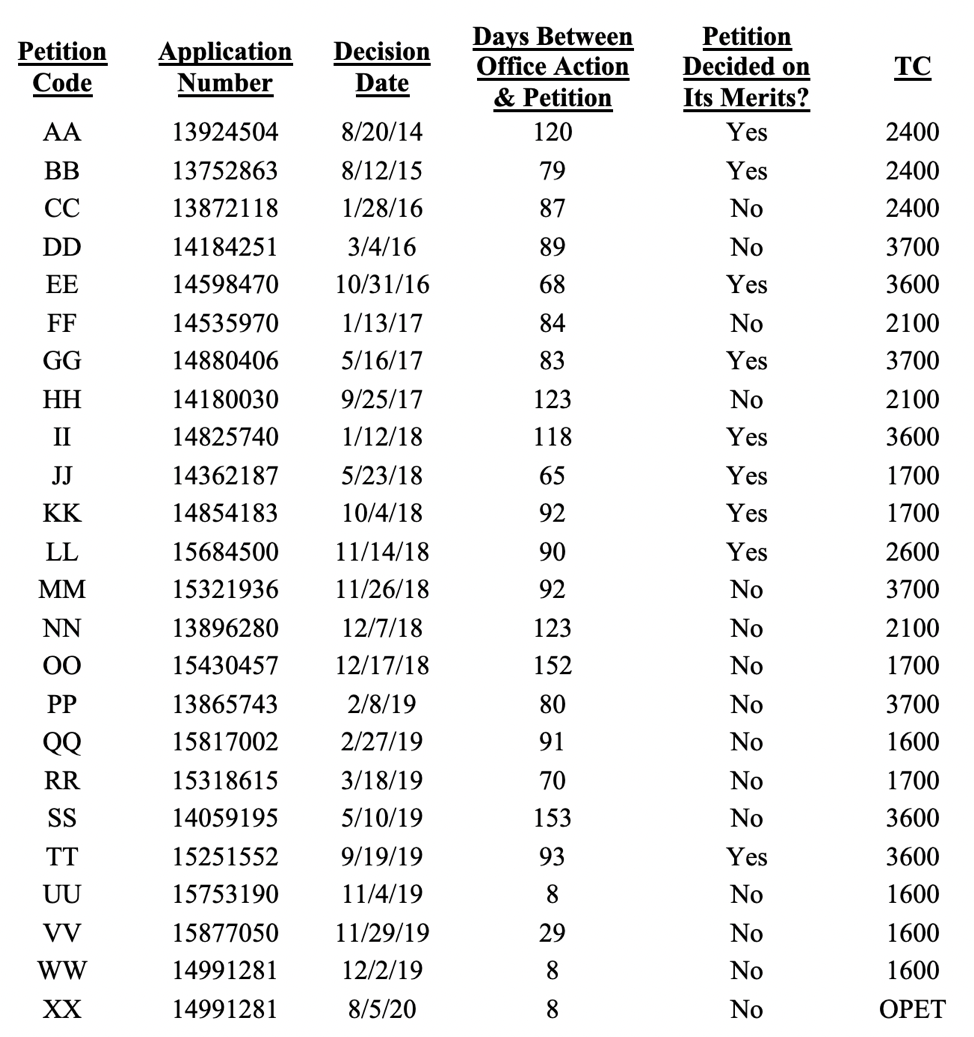 Historically, TC Directors routinely exercised their discretion to constructively waive the two-month period and decided the merits of late-filed petitions. From this survey, the course of action (dismissed as untimely or decided on their merits) apparently does not hinge upon the lateness of the petition. Chart 1 shows that petitions filed in the third and fourth month after final Office action were equally as likely to be decided on their merits (9) as to be dismissed as untimely (9). 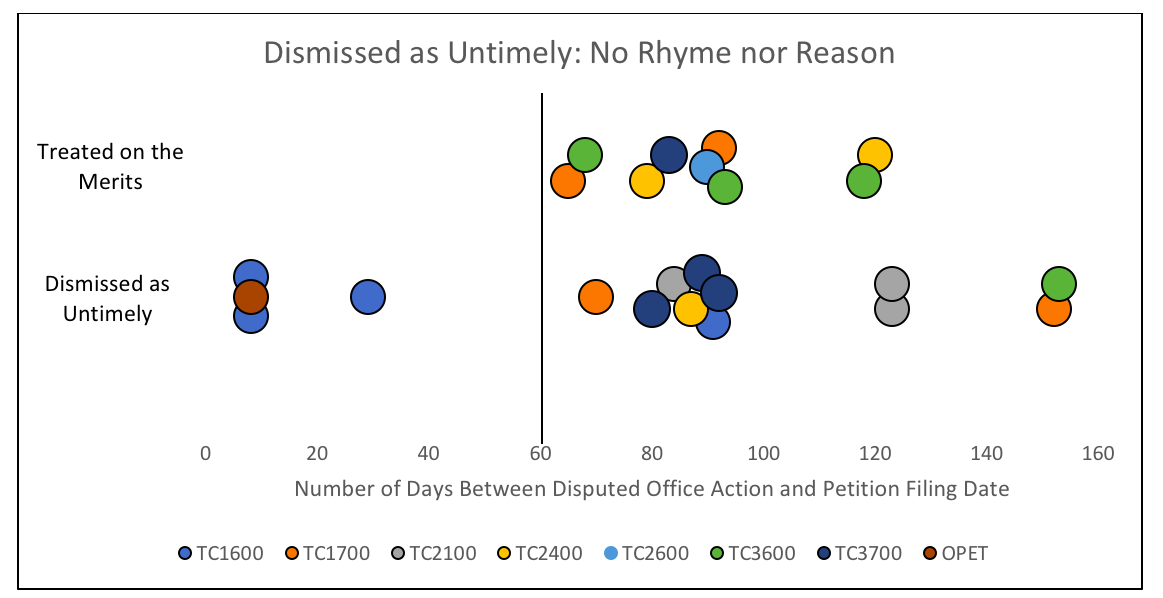 Dismissed as Untimely: No Apparent Rhyme Nor Reason

The MPEP provides no rationale identifying circumstances in which the two-month period should be constructively waived. None of Decisions AA-TT provides a reason as to why a late-filed petition was either treated on the merits or dismissed as untimely. As such, this important decision is apparently left entirely to the Group Director’s discretion. Below are three examples of the arbitrariness:

We also discovered disparate practices between two populations of cases: those decided before and after November 15, 2018. 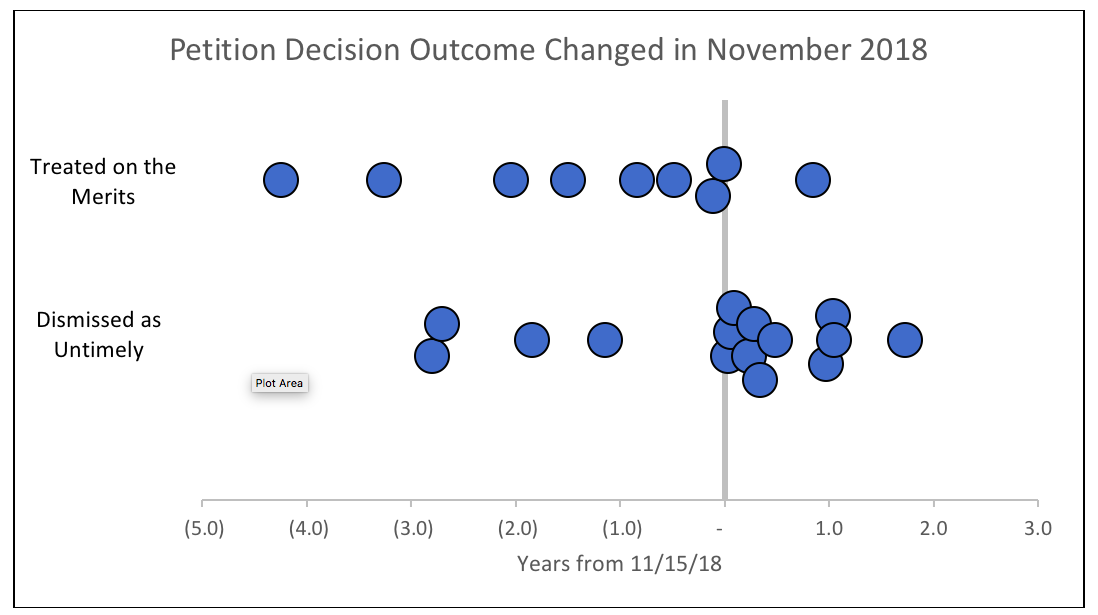 Prior to November 15, 2018, we found 67% (8/12) of the petitions filed more than two months after the contested Office action mail date were decided on their merits. See Decisions AA-LL. However, since November 15, 2018, 92% (11/12) of the petitions have been customarily dismissed as untimely. This result includes petitions filed more than two months after the disputed Office action and petitions filed within two months of the disputed action. Compare Decisions MM-TT and UU-XX, respectively. Without public notice, TC Group Directors collectively began strictly enforcing the Section 1.181(f) time period in late 2018 to retroactively dismiss petitions as untimely.

During the course of our review, we identified three recent instances in which the practice of dismissing petitions as untimely was expanded to dismiss timely-filed petitions.

First, TC1600 Group Directors imposed a new interpretation for MPEP Sections 706.07(c) and (d) to dismiss timely-filed petitions pertaining to premature final rejections. In October 2019, a petition filed under 1.181 within one week following receipt of a final Office action was dismissed by a first TC1600 Director as untimely because “[a]pplicants should note that MPEP 706.07(c) AND (d) cited above indicate that a “request by applicant for reconsideration” for withdrawal of a premature Final Rejection must be made by applicant” prior to petitioning the TC Director for relief.” (Emphasis in original). Decision UU.

The rationale applied in Decision UU is not consistent with Section 706.07(c):

Any question as to prematureness of a final rejection should be raised, if at all, while the application is still pending before the primary examiner. This is purely a question of practice, wholly distinct from the tenability of the rejection. It may therefore not be advanced as a ground for appeal, or made the basis of complaint before the Patent Trial and Appeal Board. It is reviewable by petition under 37 CFR 1.181. See MPEP § 1002.02(c). (Emphasis added).

Section 706.07(c) indicates the time period in which the propriety of a final rejection is reviewable, i.e., while the application is under TC jurisdiction. The pronoun “it” in the sentence “[i]t is reviewable by petition under 37 CFR 1.181” clearly refers back to the premature final rejection. Section 706.07(c) indicates the petition should be filed before an application is under appeal or abandoned.

Moreover, the rationale applied in Decision UU mischaracterizes Section 706.07(d)’s instructions as to when and how examiners can withdraw finality:

If, on request by applicant for reconsideration, the primary examiner finds the final rejection to have been premature, he or she should withdraw the finality of the rejection.

Second, TC1600 expands its new policy requiring reconsideration to non-final Office actions. In November 2019, a petition under Section 1.181 filed within one month following receipt of an incorrect non-final Office action was dismissed as untimely. A second TC1600 Group Director took the position that “the merits of such won’t be considered since there are prosecution related remedies available to applicant” and “applicant must first request reconsideration of the Non-Final Office action by contacting the Examiner and/or Supervisor prior to petitioning the TC Director for relief.”  Despite noting “Applicant’s unsuccessful telephonic attempt to contact the examiner”, the TC1600 Group Director dismissed the timely-filed petition as untimely. Decision VV.

Third, in December 2019, TC1600 dismissed as untimely a petition requesting entry of after final amendments filed eight days after the advisory action refusing entry. The petition filed under Sections 1.181 and 1.183 contained two requests: entry of the amendment after final and withdrawal of finality. A third TC1600 Group Director summarily dismissed the entire petition as untimely purportedly for including requests pertaining to the final Office action. To obtain reconsideration, applicant was instructed to file two separate petitions. Decision WW.

Decisions UU, VV and WW indicate TC1600 is creating additional hurdles for at least some petitioners and imposing requirements not consistent with 37 C.F.R. 1.181 and current MPEP regulations. Just as pre-June 2020 Section 706.07(b) did not provide support for the TC3700 decisions based on patentably indistinct standard, current Sections 706.07(c) and (d) do not provide support for TC1600’s decisions to dismiss timely-filed petitions as untimely. Sections 706.07(c) and (d) do not require applicants to request reconsideration prior to filing a petition under 37 CFR 1.181. Requesting reconsideration from the examiner is not listed as a pre-requirement for filing Section 1.181 petition on USPTO Petitions webpage. This practice is seemingly new as the authors were unable to find any instances in Decisions A-X and AA-TT where failure to request reconsideration was mentioned as a reason to dismiss an otherwise timely-filed petition.

The Office of Petitions Supports This New Trend

Although MPEP Section 1002.02(b)(3) permits applicants to invoke supervisory review to request reconsideration of a TC Group Director’s decision, anecdotally, this is an often pointless exercise. For example, applicants followed Decision WW’s instructions and filed two separate petitions requesting reconsideration. The timely-filed petition requesting entry of the after final response languished at the Office of Petitions for 187 days. In August 2020, the Office of Petitions issued a one-page summary dismissal of the 14-page petition, using circular reasoning to refuse to consider any of the merits because “[t]he instant request for reconsideration is not subject to decision on the merits as the initial petition was untimely filed.” Decision XX suggests that the Office of Petitions condones TC1600’s new methods for dismissing timely-filed petitions as untimely.

The timely-filed 15-page renewed petition under 37 C.F.R. 1.183 requesting withdrawal of the final rejection, pending 249 days and counting, is likely to be dismissed as moot in view of applicant’s intervening Appeal.

All too often, applicants acquiesce to premature or improper final Office actions rather than engage in the inherently uncertain, and frequently futile, petition process. In June 2020, without public notice, the USPTO expanded Section 706.07(b), to authorize first action final rejection (FAFR) in continuing applications when the claims are deemed patentably indistinct from those previously examined. More improper FAFRs would prompt more petitions to withdraw a premature final rejection. However, in advance of Section 706.07(b)’s expansion, the USPTO quietly implemented policy changes to limit an applicant’s ability to obtain consideration and reconsideration of petitions related to premature final Office actions.