“Petitioners correctly identify the flaws in the Federal Circuit’s decision that allowed an after-the-fact administrative ruling applying a lower burden of proof—by non-Article III adjudicators that the Federal Circuit has since determined in its Arthrex opinion were appointed unconstitutionally, no less—to undo a final decision awarding a patent owner the damages it was due from proven infringement the court had separately affirmed.” – brief of US Inventor 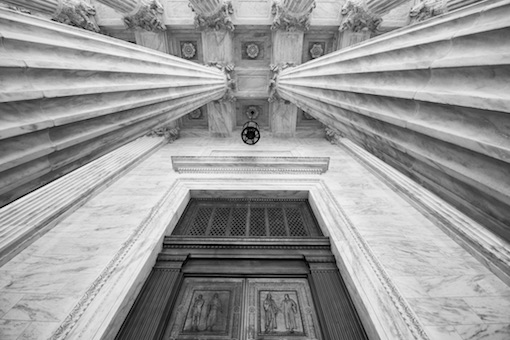 Three amici have weighed in supporting Chrimar Systems, Inc.’s petition for certiorari to the U.S. Supreme Court and urging the High Court to clarify the law and undo the harm they say has been caused by the Federal Circuit’s application of the so-called Fresenius/ Simmons preclusion principle.

On March 10, Chrimar Systems, Inc. filed a petition for a writ of certiorari with the High Court in Chrimar Systems v. ALE USA, Inc. asking the Court to weigh in on when a patent judgment becomes final. Chrimar is specifically asking the Court to answer: “1. Whether the Federal Circuit may apply a finality standard for patent cases that conflicts with the standard applied by [the Supreme Court] and all other circuit courts in nonpatent cases, and 2. Whether a final judgment of liability and damages that has been affirmed on appeal may be reversed based on the decision of an administrative agency, merely because an appeal having nothing to do with liability, damages or the proper calculation of the ongoing royalty rate is pending.”

In the Fresenius case, the Federal Circuit held that it was bound by John Simmons Co. v. Grier Bros. Co., 258 U.S. 82 (1922), which Chrimar argued in its petition is “inapposite Supreme Court authority.” The Simmons decision reasoned that a “district court must apply intervening legal developments affecting the asserted patent’s validity, even if the court of appeals already decided the validity issue the other way.” However, as Chrimar noted in its petition, Simmons involved an interlocutory decision where no measure of damages had been established, rather than an appeal from a final judgment and complete accounting.

Chrimar’s appeal to the Supreme Court arises from the Federal Circuit’s September 2019 decision to vacate and remand its previous judgment affirming liability and damages in favor of Chrimar, based on the Patent Trial and Appeal Board’s (PTAB) findings that all asserted claims of Chrimar’s patents were unpatentable. In light of the PTAB’s decisions, “the Federal Circuit ordered that the Article III damages judgment be vacated and remanded for dismissal [and] reasoned that the later Executive Branch administrative outcome required vacating the prior already-affirmed Article III judgment,” according to Chrimar’s petition.

In its amicus brief supporting Chrimar, US Inventor, Inc. argues that the Fresenius line of precedent effectively “usurps a procedural issue from the regional circuits, in this instance the Fifth Circuit, which follows the Restatement (Second) of Judgments, § 13 and “which should control.” The brief also notes that “The Fresenius decision itself was a split decision with a vigorous dissent from Judge Newman.” It continues:

It is time for this Court to review the Federal Circuit’s dubious line of precedent that began with Fresenius, reared its head again in ePlus, Inc. v. Lawson Software, Inc., 790 F.3d 1307 (Fed. Cir. 2015), and continues apace through this appeal. Petitioners correctly identify the flaws in the Federal Circuit’s decision that allowed an after-the-fact administrative ruling applying a lower burden of proof—by non-Article III adjudicators that the Federal Circuit has since determined in its Arthrex opinion were appointed unconstitutionally, no less—to undo a final decision awarding a patent owner the damages it was due from proven infringement the court had separately affirmed.

In the ePlus case, the Federal Circuit split five-to-five, resulting in denial of rehearing, following a two-to-one panel decision over the dissent of Judge O’Malley. This conflict undermines the Court’s mandate to provide “desirable uniformity” in patent cases in order to “’strengthen the United States patent system in such a way as to foster technological grown and industrial innovation.’” Ultimately, and more broadly, decisions like the one in Chrimar v. ALE “threaten to undermine the public’s faith in the United States patent system, especially when it seems to serve as a one-way ratchet to the detriment of inventors and patent holders,” says the brief.

The Naples Roundtable, a nonprofit dedicated to finding ways to strengthen the U.S. patent system, argues in its amicus brief that “[t]he Federal Circuit’s self-coined ‘Fresenius/Simmons preclusion principle’ is unique to patent law, is contrary to the preclusion principles of other circuits, and is contrary to the Restatement of Judgments.” Without finality, defendants are incentivized to engage in gamesmanship and delay justice, says the brief. The Fresenius/ Simmons rule creates a circuit split between the Federal and Fifth Circuits and also contradicts the Federal Circuit’s own precedent. Citing Robert Bosch, LLC v. Plyon Manufacturing Corp., 719 F.3d 1305, 1308 (Fed. Cir. 2013) (en banc), the brief explains that the Federal Circuit has elsewhere adopted a more flexible approach to finality that represents a disconnect in the Court’s positions on the subject.

Most harmful are the “dilatory incentives” created by the Fresenius/ Simmons principle, says Naples. In the “race to finality” between the district courts and the PTAB, the courts are at a disadvantage as they have more issues to address. The PTAB in contrast only has to grapple with “a narrow slice of a single issue: patentability under § 102 or § 103, limited only to prior art consisting of patents and printed publications.” The brief adds:

The practical effect of the Federal Circuit’s Fresenius/Simmons rule is that accused infringers are motivated to engage in dilatory tactics to keep at least some issue alive in district court, in the hopes that a parallel PTO proceeding on the same patent will catch up to and overtake the district court proceeding…. If allowed to stand, this very case will serve as an unfortunate blueprint for future infringers to keep their cases alive long enough for a trailing PTO proceeding to catch up and overtake the litigation. Future defendants will be tempted to simply follow Respondent ALE’s footsteps in this case.

The National Small Business Association (NSBA), The Alliance of U.S. Startups and Inventors for Jobs (USIJ), The Innovation Alliance, The Small Business Technology Council, the Center for Individual Freedom (CFIF), and Conservatives for Property Rights filed a joint brief echoing many of the arguments made by the other amici and adding that the application of Fresenius has only become “worse over time”:

Cases since Fresenius have allowed intervening PTAB invalidity determinations to overturn a jury verdict when the invalidity determinations had no connection to the matters that were reopened through remand. See, e.g, ePlus, Inc. v. Lawson Software, Inc., 789 F.3d 1349, 1361 (Fed. Cir. 2015). That includes this case, in which the original monetary judgment was supported by four different patents, and in the original appeal, that monetary award was left in place.

The brief goes on to characterize the Fresenius rule as “an accelerant to the abuses that patentholders must suffer at the hands of patent infringement defendants.” In addition to having to defend patents at the PTAB, patentees must also contend with infringers’ attempts to delay proceedings in district court, extending the timeline for when a patent owner can feel confident in their patent rights and pursue commercialization. “The cloud of uncertainty Fresenius casts over a patent, even after the patentholder is victorious in court, can be crippling to startups, which often rely on their patents to provide collateral for funding, and to provide their only means to compete against more established rivals,” says the brief.