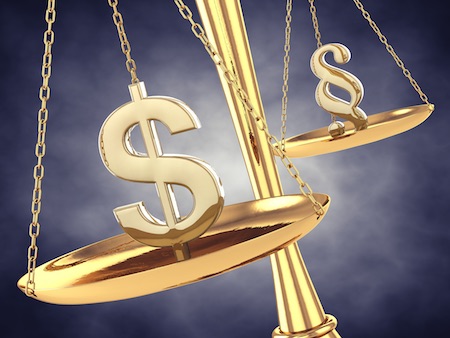 The United States Court of Appeals for the Federal Circuit recently issued a ruling that should provide clarity in calculating patent infringement damages.  More specifically, the decision emphasizes that applying the entire market rule (recovery of damages based on the value of an entire apparatus containing several features) may only be applied when the infringed feature constitutes the sole basis for consumer demand. See Power Integrations, Inc. v. Fairchild Semiconductor Int’l., No. 16-2691, 17-1875, (Fed Cir. Sep. 20, 2018) (Before Dyk, Clevenger, and Chen, Circuit Judges) (Opinion for the court, Dyk, Circuit Judge).

This case began when Power Integrations, Inc. (“Power Integrations”) sued Fairchild Semiconductor Corporation (“Fairchild”) for infringing U.S. Patent Nos. 6,212,079 (“the ‘079 patent) and 6,538,908 (“the ‘908 patent), both used in power supply controller chips, and directed at a switching regulator and a power supply controller, respectively. A jury found Fairchild infringed both patents and initially awarded damages of $105 million for reasonable royalties. Six months later, while the case was still pending at the district court due to a JMOL motion by Fairchild, the Federal Circuit issued a decision in VirnetX, Inc. v. Cisco Systems, Inc. 767 F.3d 1308, 1329 (Fed. Cir. 2014), which concerned the general rule that a patentee seeking damages based on an infringing product with both patented and unpatented features must “apportion damages only to the patented features.” VirnetXstated that “simply identifying the smallest salable unit is not necessarily sufficient to satisfy a patentee’s obligation to apportion for multi-component products with significant unpatented features.” Because Power Integrations’ royalty calculation didn’t apportion beyond the “smallest salable unit” and it disclaimed reliance on the entire market value rule, the district court granted a new trial on the issue of damages. During the second trial on damages, Power Integrations’ expert provided testimony based on the entire market value rule, and the jury ultimately awarded $138.8 million in damages. Fairchild appealed both the finding of infringement and the damages award.

Regarding infringement of the ‘079 patent, Fairchild argued it did not have a “fixed switching frequency for a firstrange of feedback signal values,” as required by the ‘079 patent’s claims, because Fairchild’s product operated with a 5-15% variance in frequency. Expert testimony demonstrated that no real-world power supply controllers could operate with an absolutely fixed, or non-varying, frequency. Consequently, the Court rejected this argument because it would render the claims inoperable. Fairchild alternatively argued “fixed switching frequency” to include a “non-varying number of switching cycles per second”—a claim construction argument never presented prior to the case being presented to the jury. The Court dismissed this argument, stating “[i]t is well-settled that a party cannot reserve a new claim-construction argument for the post-trial motion stage of litigation.” Accordingly, the lower court did not err in finding infringement of the ‘079 patent.

Fairchild also disputed the lower court’s finding of infringement of the ‘908 patent under the doctrine of equivalents. At issue was whether prosecution estoppel barred Power Integrations from using the terms “voltage” and “current” interchangeably when, in a related parent patent, it explicitly distinguished “voltage” from “current.” Although the patentee specifically distinguished between “current” and “voltage” during prosecution of the parent patent, the language at issue in the parent was different than in the ’908 patent. Accordingly, the Federal Circuit held that Fairchild failed to establish that Power Integrations clearly surrendered the subject matter, making prosecution estoppel inapplicable.

Regarding the damages issue, the Court began by summarizing how royalties should be apportioned between infringing and non-infringing features of the accused product:

Undertaking an apportionment analysis where reasonable royalties are sought generally requires a determination of the royalty base to which the royalty rate will be applied. We have articulated that, where multicomponent products are accused of infringement, the royalty base should not be larger than the smallest salable unit embodying the patented invention. We have cautioned against reliance on useof the entire market value of a multi-component product that includes a patented component because it “cannot help but skew the damages horizon for the jury, regardless of the contribution of the patented component to this revenue.” Uniloc, 632 F.3d at 1320. “Where small elements of multicomponentproducts are accused of infringement, calculating a royalty on the entire product carries a considerable risk that the patentee will be improperly compensated for non-infringing components of that product.” LaserDynamics, 694 F.3d at 67. Admission of evidence of the entire market value “only serve[s] to make a patentee’s proffered damages amount appear modest by comparison, and to artificially inflate the jury’s damages calculation beyond that which is ‘adequate to compensate for the infringement.’” Id. at 68 (quoting 35 U.S.C. § 284). Even when a damages theory relies on the smallest salable unit as the basis for calculating the royalty, the patentee must estimate what portion of that smallest salable unit is attributable to the patented technology when the smallest salable unit itself contains several non-infringing features. VirnetX, 767 F.3d at 1327.

To base its damages theory on the entire market value rule, Power Integrations bore the burden of proving “the patented feature is the sole driver of customer demand or substantially creates the value of the component parts.” Both parties, however, agreed that the accused products contained other valuable non-infringing features. Nevertheless, Power Integrations presented no evidence about the effect of these other non-infringing features on consumer demand or product value. Accordingly, the Court held that the evidence submitted by Power Integrations was insufficient to invoke the entire market value rule, and vacated the award of damages, and remanded for a new trial.

To invoke the entire market rule in assessing damages, a patentee bears the burden of proving “the patented feature is the sole driver of customer demand or substantially creates the value of the component parts.”