“I certainly agree it is important to have certainty of patent rights,” Iancu explained. “The boundaries of a patent cannot possibly depend on the happenstance of which tribunal will review that patent years down the line…” 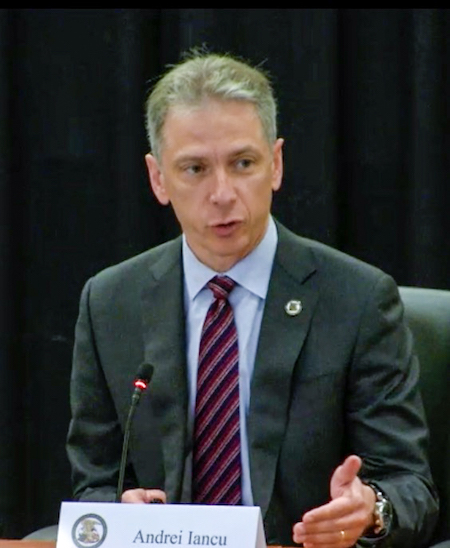 Earlier this morning Andrei Iancu, Director of the United States Patent and Trademark Office, gave opening remarks at the Quarterly meeting of the Patent Public Advisory Committee (PPAC), which was followed by a question and answer period. Repeatedly during his remarks and the question and answer period, Director Iancu explained that there will be more to come from the USPTO on patent eligibility and PTAB reforms “hopefully in the next several weeks or so.”

Of particular interest, in an exchange with Bernie Knight, former General Counsel at the USPTO, Director Iancu sun sponte raised the issue of panel stacking, explaining that he has heard the criticisms, but does not share the concerns. At first that would seem rather dismissive. Iancu would go on to say, however, that in the coming weeks the Office will have more to say on this issue, and that there will be greater transparency for the parties and the public on the issue of expanded panels.

Thus, while Director Iancu may publicly say he does not share the views of the critics, if the Office does make changes to enact real transparency that would address one of the serious criticisms of expanded panels, which we have here on IPWatchdog referred to as phantom expanded panels because of the complete and total lack of transparency. Left open, however, would be the use of panel stacking to achieve the desired outcome preferred by the Director or Chief Judge, which in an inter partes process is tantamount to picking winners and losers and is entirely different than the panel stacking tolerated by the Federal Circuit’s In re Alappat decision. See Alappat 101: Why the Federal Circuit has not authorized the PTAB practice of panel stacking.

Director Iancu began his remarks by speaking of the issuance of Patent No. 10,000,000 since the last PPAC meeting, explaining that he signed the patent, as per usual, but that the patent was also signed by President Trump and Commerce Secretary Wilbur Ross, with the signing ceremony taking place in the Oval Office. Starting with President George Washington and running through President John Quincy Adams all patents were signed by Presidents, but since John Quincy Adams only two Presidents have signed patents — President Gerald Ford signed a patent in 1976 in a ceremony relating to the bicentennial celebration, and now President Trump has signed a patent.

On to substantive issues, Director Iancu spoke of the so-called Berkheimer memo, which deals with Step 2B of the Alice/Mayo framework, and have also issued the Vanda memo, relating to claims relating to methods of treatment. Director Iancu explained the Office continues to work on additional 101 guidance and “hopefully in the coming months we will have more to say on that issue.”

“We are working on various issues coming out of the PTAB,” Iancu said pointing to the proposed rules relating to the switch from the broadest reasonable interpretation of a claim in post grant proceedings to what is known as the Phillips standard, the claim construction standard used in federal district court, and which the Federal Circuit has referred to as the true construction of the claim. Iancu said the Office received more than 350 comments relating to the proposed rules, and work is ongoing as the Office reviews those comments. Although Director Iancu did not characterize the substance of the comments, it is understood that the bulk of the comments received were either supportive or neutral.

“We are looking at a variety of other issues with respect to the PTAB, such as the Trial Practice Guide, and the like,” Iancu said.

Q&A with Director Iancu and PPAC

Responding to an inquiry about the business community losing faith in the patent system and the importance of his leadership in the public eye, Iancu explained:

We do have a fairly big hill to climb. There is absolutely zero doubt in my mind that the patent system is critically important; that having a robust patent system is critically important. All we have to do is look at our history, from the founding of the Republic until today, and all the amazing technology and science and growth that we have experienced in this country… and throughout all that time, and all that work, it was backed by the patent system… We really must have faith in the system; the business community must have faith in the system… We need to have a very careful balance and understand the pressure points. The last thing we need to do is to ignore or downgrade the patent system. That will have a detrimental affect across the board. Instead we need to have a robust system in a balanced fashion.

PPAC Member and former USPTO General Counsel, Bernie Knight, raised the question about the difference between what happens in examination and what happens before the PTAB. The user community is very concerned that examiners are issuing claims and those same claims are being invalidated by the Board, Knight explained. “What are the initiatives that you have started that you have started to enhance the certainty of the patent right before the Board?” 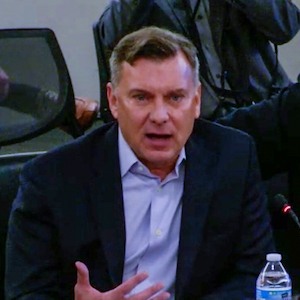 “I certainly agree it is important to have certainty of patent rights,” Iancu explained. “The boundaries of a patent cannot possibly depend on the happenstance of which tribunal will review that patent years down the line, because you don’t know whether it might be the PTO that takes it up first, the district court or the ITC that will take it up first. The boundaries, at least from an objective point of view, should be the same no matter who reviews it. That is one of the main reasons we proposed the claim construction standards should be the same.”

Director Iancu went on to explain that he doesn’t believe that the result of post grant proceedings should be an all or nothing proposition. He explained the statute envisions an amendment process, which would allow claims that might be invalid as originally granted to be fixed, which is why he believes “a robust amendment process is critically important.”

“Let me mention one more thing that I did not mention in my opening comment, which is the question of the review panel itself,” Iancu said. “There has been some criticism out there about the way we sometimes enhance or expand the panel. I don’t particularly subscribe to those criticisms, but I hear them. So, we are working toward clarifying that process to provide more transparency, both to the parties to the process as well as to the public. And again, hopefully in the next several weeks or so we will have more to say about that as well.”

Knight followed up with a suggestion based on his experience having been General Counsel of the USPTO during the Kappos years. Knight explained that one way to enhance the certainty of the patent grant would be to establish that when the Office issue guidance to examiners that guidance is actually binding on the PTAB, because while he was General Counsel he said he would routinely hear from member of the Board that they do not have to follow Office guidance.

“But they do report to you— you prepare their performance plans— I would think one great initiative would be to make certain the Board judges are following the same guidelines the examiners are following,” Knight said.

“Thanks for the suggestion. Let me just state the obvious: We are one agency,” Iancu said with a smile.

Knight is absolutely correct. Members of the PTAB do not follow agency guidance, and if Director Iancu can truly get the USPTO to operate as one agency on the same page that would be a tremendous legacy. Given the latitude Director Iancu is being given from the Department of Commerce and the White House, as well as his accomplished track record in the private sector, I don’t doubt that he has as good a chance as anyone to accomplish that goal, but it is not going to be an easy challenge I’m afraid despite the fact that it should be obvious that the USPTO is one agency.