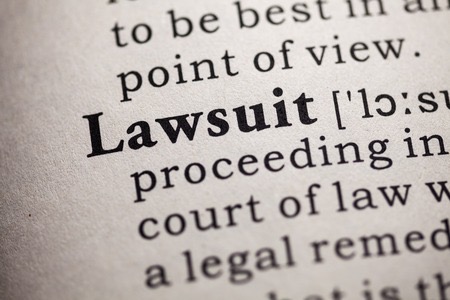 On June 7th, San Antonio, TX-based reciprocal inter-insurance exchange United Services Automobile Association (USAA) filed a lawsuit alleging claims of patent infringement against San Francisco, CA-based financial services multinational Wells Fargo. The complaint, filed in the Eastern District of Texas, involves the assertion of patents in the field of mobile financial services which, at first glance, appear as though they may face some rigorous validity challenges thanks to precedent set by the U.S. Supreme Court in its 2014 decision in Alice Corp. v. CLS Bank International.

USAA is asserting a series of four patents-in-suit in this case, including:

As USAA’s complaint notes, the ‘779 and ‘571 patents generally cover the use of an alignment guide to reduce error rates in mobile check depositing, and the ‘090 and ‘571 patents generally cover improved computer systems which are able to capture high quality check images. Such technology is critical to USAA, which serves members of the U.S. military and their families, because unlike traditional banks USAA reaches its customers remotely, not in brick-and-mortar bank facilities. USAA’s customers increasingly use the company’s website or mobile application to interact with the company’s services and the company developed these patents which cover the company’s [email protected] and [email protected] services. 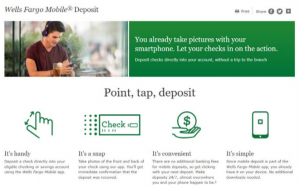 USAA alleges that Wells Fargo Mobile Deposit remote deposit capture system, which was released years after either of USAA’s remote deposit services were first offered, infringes upon the asserted patents. Wells Fargo Mobile Deposit has been downloaded more than 10 million times from the Google Play Store alone and by February 2018, Wells Fargo had 21 million users who were actively using a mobile banking account. Wells Fargo mobile check deposit system involves the use of alignment guides and feedback indicators which are designed to assist customers in orienting the camera, features covered by the USAA patents. Although USAA approached Wells Fargo last August to discuss the licensing of USAA’s remote deposit capture patents, Wells Fargo allegedly continues to practice the technologies without any compensation to USAA. Along with counts for infringement of each patent asserted, USAA is also seeking a finding of willful infringement to enhance the actual damages by three times. 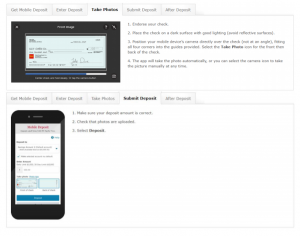 Considering the financial service that these patents cover, it’s not inconceivable that they might face challenges under the Supreme Court’s holding in Alice where it found that a computer system serving as a third-party intermediary for exchanging financial obligations was unpatentable as an abstract idea under 35 U.S.C. § 101. One could potentially argue that the patents only cover abstract ideas under Alice given that it covers the implementation of a traditional banking service (i.e.: check deposits) through a computer medium. Such issues in maintaining the validity of USAA’s patents are exacerbated by the prospects such patents could face at the Patent Trial and Appeal Board (PTAB), especially given the potential that these inventions could be deemed covered business methods (CBMs) subject to CBM review proceedings at the PTAB where Section 101 challenges are available to a patent-challenging petitioner.

A search of patent prosecution documents available through the U.S. Patent and Trademark Office’s Public PAIR website indicates that these patents didn’t faced many issues on Section 101 grounds during prosecution, even after the Supreme Court decided Alice. In February 2017, the patent application for USAA’s ‘090 patent received a non-final rejection from the examiner on double patenting grounds in light of another USAA patent, U.S. Patent No. 8422758, System and Methods of Check Re-Presentment Deterrent. The ‘090 patent would eventually be issued after USAA filed amended claims last June. The patent application leading to the issue of the ‘517 patent also received a non-final rejection in February 2015 on 35 U.S.C. § 102(b) grounds for anticipation and then a final rejection in July 2015 for double patenting, but these challenges were also overcome during prosecution of the patent at the USPTO.

It will be interesting to see if any validity challenges under the Alice standard are brought by Wells Fargo to the district court.

Of course, if these patents are in fact deemed valid and enforceable in district court, it’s very possible that this suit against Wells Fargo could be just the start of a patent enforcement campaign against a series of banks offering mobile check deposit services. Wells Fargo is not the only major banking institution to offer mobile check deposit services via smartphone. Fidelity’s Mobile Check Deposit web page shows a smartphone taking an image of a check with the use of a rectangular feature on the phone’s display which seems to resemble the alignment guide covered by USAA’s patents. The same is true of mobile banking web pages found on the websites of PNC and Bank of America. So it appears that the result of USAA’s lawsuit against Wells Fargo will either result in USAA striking out big by losing its intellectual property, or USAA striking it rich in the incredibly valuable sector of mobile banking.