The patents asserted by TiVo in the Section 337 investigation are: 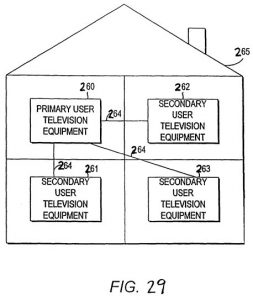 TiVo also asserted four other patents in the ITC’s Section 337 investigation. According to the 8-K filing, no Section 337 violations involving those patents have yet been identified.

News reports indicate that a final ruling on this Section 337 investigation is expected on September 26th after a full investigation, at which point the ITC could decide to block infringing products being imported by Comcast and others in the investigation from entering the U.S. market. In the first full day of trading after TiVo filed that 8-K with the SEC, shares of the company rose by about 17 percent. Near the end of May, at least one financial analyst considered TiVo stock a buy with a price target of $25.

The alleged features of Comcast’s entertainment services which are available on the X1 entertainment operating system platform which offers cloud storage of content which can be watched remotely away from the home. According to news reports, one specific X1 feature at issue is the AnyRoom digital video recording (DVR) service which enables users to record up to six shows simultaneously per set-top box in the home with options for independent parental controls and sharing content among set-top boxes.

The most recent ITC ruling comes after a series of successful patent licensing settlements inked by TiVo over about the past half-year. Early last November, TiVo ended patent litigation against Korean tech giant Samsung Electronics (KRX:005930) by entering into a licensing deal for mobile, consumer electronics and set-top box patents for a period of more than five years. Later that month, TiVo reached a licensing agreement with Los Gatos, CA-based video-on-demand provider Netflix (NASDAQ:NFLX) even after the Court of Appeals for the Federal Circuit ruled that two patents asserted by TiVo against Netflix were invalid under the Alice standard. This April, TiVo struck a licensing agreement with private digital media company Roku, Inc., which merges the TiVo and Roku patent portfolios for multiple years while also providing Roku licenses to patents covering over-the-top (OTT) content delivery held by Bellevue, WA-based patent licensing firm Intellectual Ventures.