Through the Looking Glass: Recent Federal Circuit Decisions Do Not Change the Need for Action on Alice 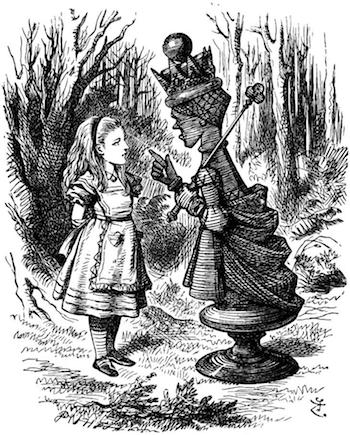 The Red Queen lectures Alice. From the novel “Through the Looking Glass.”

The Supreme Court’s decision in Alice v. CLS Bank International[1] has created uncertainty for computer-related invention patents unlike any other decision in recent memory.[2] Proposals are emerging for amending the statute governing patent subject matter eligibility (35 U.S.C. § 101) to prevent Alice from causing further damage.[3] As more of these proposals emerge, it is important that the patent community continue to strive for consensus to improve the odds that Congress will act.

Meanwhile, the Court of Appeals for the Federal Circuit (CAFC), the federal court which presides over all appeals of decisions from patent infringement trials, has found over 90% of the inventions before it (on subject matter eligibility grounds) ineligible for a patent and has upheld inventions as subject matter eligible in a relatively small number of cases since Alice.[4] Some have interpreted the cases where the patent was held to be eligible to mean that all is now well and that legislation to amend 35 U.S.C. § 101 is not needed. Not so. The chaos created` by Alice does not end merely because the CAFC has found a modest number of inventions to be subject matter eligible.

To recap, in Alice, the Supreme Court confirmed its own recently-created version of subject matter eligibility requirements (in addition to those articulated in 35 U.S.C. § 101), consisting of a two-step test: 1) determining whether the claimed invention is directed to one of a few Court-created exceptions to subject matter eligible for patenting, and if so, 2) determining whether the claimed invention includes additional elements amounting to “significantly more” than the relevant exception. With respect to computer-related inventions, including inventions implemented in software, the relevant exception is whether the claimed invention is directed to an “abstract idea”. The Court did not define – in fact expressly declined to define – what an abstract idea is.[5] The Court thus left us with a meaningless test based upon an undefined standard (abstract idea) and an additional step that depends upon the precise reach of that undefined standard (substantially more).

We still need a clear test for subject matter eligibility. Despite the recent CAFC cases, the U.S. Patent & Trademark Office (USPTO) and the courts must still apply the same vague, meaningless and unpredictable test handed down by the Supreme Court in Alice. The same gross inconsistencies that result from the Alice test remain in the patent system. Subject matter eligibility rejection rates at the USPTO are still generally higher than before the Alice decision and the largest increases have been for network and video inventions and particularly for business method inventions.[7] The courts interpret Alice to more significantly impact software (and not merely business methods).[8] CAFC judges also appear to remain deeply divided, including one judge that believes Alice “sounded the death knell for software patents”[9] despite the Supreme Court in Alice never referring to software per se, clearly stating “[t]here is no dispute that a computer is a tangible system…, or that many computer-implemented claims are formally addressed to patent-eligible subject matter” and warning that we must “tread carefully” in construing an exception to subject matter eligibility “lest it swallow all of patent law.”[10]

Patent applicants and patentees need more clarity. The time and expense of appellate court review to resolve what should be a simple threshold issue inhibits patent system efficiency and should not be required for finality. Our innovation economy must have certainty. The lack of clarity and uncertainty impacts enforcement of patents, evaluation of inventions for patenting and, ultimately, investments in research and development. Robust, reliable patent rights promote innovation. A more predictable and consistent test for subject matter eligibility is (still) needed.

[2] For more about the problems caused by Alice, see my article Congress Needs to Act So Alice Doesn’t Live Here (in the Patent System) Anymore, IP Watchdog (Feb. 13, 2017).

[4] The CAFC has found 80 out of 88 inventions it has considered on subject matter eligibility grounds to be ineligible See Robert R. Sachs, Alicestorm Update for Q1 2017 (Apr. 6, 2017). For inventions found eligible see:

“[A] search for a single test or definition in the decided cases concerning § 101 from this court, and indeed from the Supreme Court, reveals that at present there is no such single, succinct, usable definition or test. The problem with articulating a single, universal definition of ‘abstract idea’ is that it is difficult to fashion a workable definition to be applied to as-yet-unknown cases with as-yet-unknown inventions. That is not for want of trying; to the extent the efforts so far have been unsuccessful it is because they often end up using alternative but equally abstract terms or are overly narrow.” Amdocs (Isr.) Ltd. 841 F.3d at 1294, 120 U.S.P.Q.2d at 1531.

“The Supreme Court has not established a definitive rule to determine what constitutes an ‘abstract idea’ sufficient to satisfy the first step of the Mayo/Alice inquiry.” Enfish, LLC, 822 F.3d at 1334, 118 U.S.P.Q.2d at 1688.