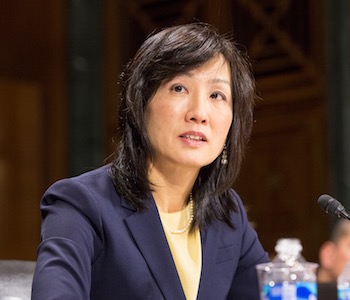 In the seemingly never-ending saga of Michelle Lee and whether she remains Director of the United States Patent and Trademark Office, there is no concrete “news” to report. Having said that, Congressman Darrell Issa (R-CA) continues to be the only real source of information. Issa, the Chair of the House Judiciary Subcommittee on Courts, IP and the Internet, has been the only government official to speak on the record about Michelle Lee since this unlikely, bizarre story first started to unfold in the final days of the Obama Administration.

Yesterday Politico reported that Issa had given an update explaining that he was pleased Lee had been held over by the Trump Administration and that he thought she might be in line for some Administration position outside of the Patent Office.

“I’m delighted that she’s been held over, and I would expect that her being held over allows for an orderly transition should they find another place for her in the administration,” Issa told Politico reporter Ashley Gold. Issa would go on to hint that Lee could possible serve in the Office of Science and Technology Policy (OSTP), or perhaps in some trade negotiating capacity. “The first step was to have her held over so that she wouldn’t return to a lucrative job in her old industry.”

Issa would go on to tell Politico that Lee is “doing her job, she’s signing patents… and that’s what’s important.”

Politico also report that USPTO press secretary Paul Fucito told them that Lee has been signing issued patents since Inauguration Day, although he declined to clarify Lee’s status at the USPTO. I continue to get nowhere with the USPTO, so getting confirmation of even the obvious — that Lee’s signature continues to be printed on issued patents — is farther than I’ve been able to get. I haven’t even been able to get the Office to confirm that the Director, whoever that person may be, doesn’t actually sign the thousands of patents issued every week but rather that an electronic version of the signature is printed on the issued patents.

A few thoughts come to mind

First, for several months I have heard rumors that Lee would like to be appointed to become a Federal District Court Judge in California and had, in fact, brought the possibility up to at least some Obama Officials. While she has made clear that she would serve the Trump Administration if asked, she probably has her eyes set on a lifetime appointment if one becomes available.

Second, so far only Issa has affirmatively stated that Lee has been held over to serve in the Trump Administration. There has been no announcement by the White House, the Department of Commerce, or the USPTO. If she has been held over, which is certainly within the realm of possibility, it is rather curious that no official statement has been made given that there were announcements and official confirmations of other Obama appointees who were held over.

Third, 35 U.S.C. 153 requires that issued patents “be signed by the Director or have his signature placed thereon…” That Lee’s name continues to be printed on issued patents is interesting indeed, but may not be as conclusive as some believe. Depending upon when a Director leaves and when a decision is made on an Acting Director (or Commissioner for Patents who may temporarily be given authority of the Director but not be made Acting Director), there would, or at least could, be some amount of lag. So the fact that Lee’s signature appeared on issued patents on Tuesday, January 24, 2017, is hardly surprising. That here signature appeared on issued patents on Tuesday, January 31, 2017, isn’t all the shocking either. That her name continues to appear on patents issued up to and including Tuesday, February 14, 2017, starts to become much more telling. At some point whether there is an official announcement or not, the options will be binary: (1) Lee was held over by the Trump Administration; or (2) the USPTO is issuing patents in the name of someone other than the Director.

Fourth, even if Lee was held over by the Trump Administration there will be some interesting and potentially difficult questions about whether she legally remained Director or was operating as Director without authority. It was widely reported that Lee submitted a letter of resignation, as was requested by President Obama of all political appointees. She seems to have somehow escaped that resignation, but my reporting suggests that senior Obama Officials were very upset and were saying Lee had gone rogue. Is that because President Obama had accepted her letter of resignation? What a can of worms that would open. Not only would that mean that Lee would need to be confirmed again, but it would mean she is not currently Director of the USPTO despite acting as Director in all outward appearances.

Finally, mixed signals continue to be sent. As of 1:48pm ET the leadership page of the Department of Commerce website lists the position of Under Secretary for Intellectual Property and Director of the USPTO as “Vacant,” which it has done since Friday, January 20, 2017. The Executive Biographies page of the USPTO website continues to list Lee as Director, but this page is hopelessly out of date as other political appointees on this page have confirmed they resigned as requested. And as of 1:50pm ET Lee’s LinkedIn page lists her as Director.

All of this cloak and dagger secrecy surrounding Michelle Lee and the circumstances relating to her resignation and/or being held over is extraordinarily weird. The mixed signals and continued refusal to comment, coupled with the Director’s position being either vacant or held by Lee are leading some to question what is going on, and whether there is a much more serious problem lurking.

18 U.S.C. 912 makes it a felony to impersonate an officer or employee of the United Sates or any department or agency. I’m not suggesting a felony has been committed, but I do know that some people are starting to ask that question, and how can you blame them really? Lee continues to report for work, but her own agency refuses to answer whether she is even an employee. The Department of Commerce website says Director of the USPTO is vacant, and we know that Lee resigned, yet she continues to sign patents and her LinkedIn page says she is still Director. This all looks bad, very bad. The refusal to answer simple, straight-forward questions only makes it seem like there is something that needs to be hidden.

Strict secrecy requirements attach to the work done by the USPTO (see 35 U.S.C. 122, MPEP 110, MPEP 120 and MPEP 724, for example), so not knowing the status of Lee is a legitimate concern. Is she still employed by the USPTO and not Director? Is she still Director? Is she just awaiting a new detail within the Administration and hasn’t moved out of her previous office? In a legal world where even the appearance of impropriety can lead to an investigation, serious questions need to be answered.