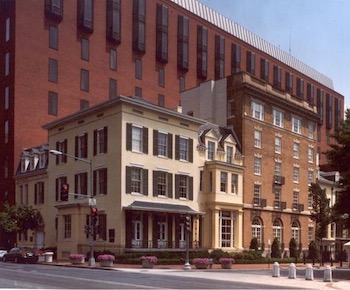 The Director of the USPTO intervened to challenge the Court’s jurisdiction to review the Board’s ultimate decisions, including whether the patents are covered business method (CBM) patents. The Court explained that it does have jurisdiction to review CBM determinations, as explained in Versata Group, Inc. v. SAP America, Inc., 793 F.3d 1306, 1323 (Fed. Cir. 2015).

The three Ameranth patents are from the same family, comprising a parent, a continuation, and a continuation-in-part. The specifications are nearly identical; the continuation-in-part included two additional figures and some additional description. The patents concern “a first menu that has categories and items, and software that can generate a second menu from the first menu by allowing categories and items to be selected.” A preferred embodiment is for use as a point of sale interface in restaurants.

The Court first addressed Ameranth’s claim construction arguments, finding that the Board correctly construed the claims “according to their broadest reasonable construction in light of the [corresponding] patent’s specification.”

The Court then reviewed the CBM status of the patents. A CBM patent must claim “a method or corresponding apparatus . . . used in the practice, administration, or management of a financial product or service,” unless the patent is for “technological inventions.” (internal quotations omitted). Ameranth did not challenge the Board’s “financial product or service” determination” but did argue that the patents fall within the exception for technological inventions.

According to 37 C.F.R. § 42.301(b), two prongs must be met for the “technological invention” exception. The claimed subject matter, as a whole, must “recite[] a technological feature that is novel and unobvious over the prior art, and it must “solve[] a technical problem using a technical solution.” The Board found that Ameranth’s patents failed to meet either prong. On review, the Court agreed with the Board’s finding that Ameranth failed to meet the second prong, as the “claims do not solve technical problems using technical solutions” and “this was ‘more of a business problem than a technical problem.’” Because the Court affirmed the Board’s determination on the second prong, it declined to address the first prong. Thus, Ameranth’s patents are CBM patents.

The Court also agreed with the Board’s determination that certain claims are invalid under § 101. This inquiry asks whether the claims are directed to a patent-ineligible concept, such as an abstract idea. If they are, the elements of each claim must be considered “both individually and as an ordered combination to determine whether the additional elements transform the nature of the claim into a patent-eligible application.” (internal quotations omitted). The Court agreed that the claims “are directed to the abstract idea of generating a second menu from a first menu and sending the second menu to another location.” Further, the patents “do not claim a particular way of programming or designing the software to create menus that have [certain] features, but instead merely claim the resulting systems. . . . Alternatively, the claims are not directed to a specific improvement in the way computers operate.”

The Court also agreed that certain claims failed to add anything more to “transform the nature of the claim[s] into a patent-eligible application.” The claim limitations relied on by Ameranth were insufficient to overcome this hurdle, as “the specifications describe the hardware elements of the invention as ‘typical’ and the software programming needed as ‘commonly known.’ The invention merely claims the addition of conventional computer components to well-known business practices.”

The Court reversed the Board’s decision that some of the claims were patentable. These claims recited a limitation that was not supported by any disclosure regarding how the limitation would be technologically implemented. “Generally, a claim that merely describes an effect or result dissociated from any method by which it is accomplished is not directed to patent-eligible subject matter.” (internal quotations omitted). Other dependent claims upheld by the Board merely recited manual modification of the menu after generation. These claims recited insignificant post-solution activity that is not patentable. Although some of the methods of modification utilize certain technologies, “[a]ppending these preexisting technologies onto those [unpatentable] independent claims does not make [the dependent claims] patentable.”

The Court relied heavily on Ameranth’s concessions within the specification that certain aspects of the invention were “typical” or “commonly known.” Practitioners should be wary of using such language and should take steps to identify specific technological improvements.