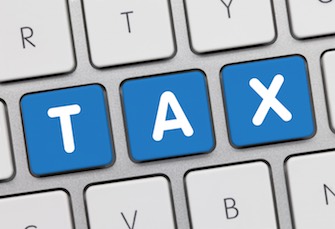 As many of our readers are no doubt aware, the Internet realm is largely untouched by the strain of collecting sales tax for e-commerce. Although companies with a physical presence in a state must collect sales tax when selling a good or service to a customer living in that same state, transactions conducted across state lines have no sales tax levy. When an Internet retailer doesn’t collect sales tax on a transaction, consumers are usually required to pay a use tax to the state where they reside, although it’s probably safe to assume that most people don’t follow that rule to the letter of the law. This is exactly why there has been a call for an online sale tax for a number of years, in fact practically since the dawn of the World Wide Web. See Eugene R. Quinn, Jr., Tax Implications for Electronic Commerce Over the Internet, 4 J. TECH. L. & POL’Y 1 (1999).

The Internet has proven to be so incredibly disruptive to the retail sector that e-commerce is now grabbing more and more market share away from brick and mortar retail, a subject we’ve been following here on IPWatchdog. The 2015 holiday season saw a major boost in temporary hires from companies relying heavily on e-commerce, including Internet retail giant Amazon.com, Inc. (NASDAQ:AMZN) and shipping company United Parcel Service (NYSE:UPS). Online transaction traffic beat predictions during the recent Black Friday/Cyber Monday holiday sales weekend, which also saw a slight decline in shopping at physical store locations.

Against this backdrop of the growing power of e-commerce, it makes sense that a political conversation on whether to enact stronger rules for taxing Internet transactions has been growing. However, it has not been able to gain a foothold at the national level. Advocates for an online sales tax reform were faced with a setback when a conference report for a Senate customs bill was sent to the floor without any language reflecting stricter measures for online sales tax collection. The Senate has been active in debating an online sales tax in recent years, passing the Marketplace Fairness Act in May 2013, a piece of legislation which would have required Internet retailers to collect tax whenever shipping products; that bill languished in the House of Representatives and has not become law.

Inaction on behalf of the federal government hasn’t been helping states out at all. Online sales tax collection at the state level has lagged behind estimates of projected tax revenues for a couple of years now and that problem will only be exacerbated as more consumers choose online avenues for their transactions. With sales taxes being a state issue while interstate trade is regulated at the federal level, it’s not difficult to see why the political response to this matter has sputtered.

Some states have decided that they can’t wait for a federal response on the collection of online sales tax, prompting them to enact their own measures. In Utah, where less than one percent of taxpayers actually pay the use tax they owe the state for Internet retail transactions, some state lawmakers have collaborated on crafting a bill that would give the state more power in collecting sales tax from online retailers, with or without a physical presence within the state. In South Carolina, January 1st of this year brought about the end of a tax break offered to Amazon for building a distribution center in that state. The collection of sales tax from Amazon sales to South Carolina consumers is expected to bring in about $13.8 million in additional tax revenue through 2016, according to projected revenues released by South Carolina’s tax department. The distribution centers built by Amazon serve as the physical in-state nexus which requires it to collect sales tax from South Carolina consumers.

It’s interesting to note that Amazon seems to be growing more proactive in collecting sales taxes, perhaps an indication that it believes a stronger regulatory response for online sales tax may come to fruition sooner rather than later. Starting on February 1st of this year, Amazon will begin to collect sales taxes on transactions from customers in the state of Colorado. What legal nexus Amazon now has with Colorado is not entirely clear, although it may relate to Amazon’s purchase of a small Denver tech company called 2lemetry.

It may be worth mentioning that lawmakers at Colorado’s state legislature have worked since at least 2010 to implement what many call an “Amazon tax,” which requires out-of-state retailers to report customer information to state tax collectors for state residents spending more than $500 on that online retail outlet. Last March, in a unanimous decision in Direct Marketing Association v. Brohl, the U.S. Supreme Court said a national marketing group could sue under federal law to stop the so-called “Amazon tax” passed by the Colorado legislature in 2010. The Supreme Court did not rule on the merits of the lawsuit, just that the lawsuit was not barred by the Tax Injunction Act, which provides that federal district courts “shall not enjoin, suspend or restrain the assessment, levy or collection of any tax under State law.” See 28 U. S. C. §134. More will certainly follow as the merits of the case are considered.

One of the industry organizations which is trying to bring some balance to the online sales tax debate is the National Retail Federation (NRF), the world’s largest retail trade organization with members in 46 countries, including the U.S. In early January, The Wall Street Journal printed an opinion letter from NRF President and CEO Matthew R. Shay which criticized the publication for remarks it made in opposition to efforts in establishing an online sales tax requirement. “If collecting sales tax is too onerous for online merchants, Congress should take the obvious step and ban them for brick-and-mortar retailers as well,” Shay wrote, offering up his own modest proposal à la Jonathan Swift. The NRF’s official website discusses figures projecting a $563 billion increase in gross domestic product and 1.5 million new jobs by the year 2022 if online retailers were required to collect taxes the same as brick-and-mortar stores. Because the NRF represents all retail, both online and at physical store locations, it would seem as though they don’t have a particular axe to grind against online retail.

Still, despite the recent setback over implementing an online sales tax in Congress, Capitol Hill hasn’t tabled the idea indefinitely. Remarks this January from U.S. Sen. Heidi Heitkamp (D-ND) indicated that political momentum towards establishing an online sales tax requirement continues to build in Washington, backed by major retailers with a heavy investment in brick-and-mortar locations such as Best Buy (NYSE:BBY) and Target (NYSE:TGT).

The debate over an online sales tax is even finding a place to roost in the buildup to the 2016 U.S. presidential elections. Television commercials being produced by a super PAC that supports U.S. Sen. Marco Rubio (R-FL) which are critical of New Jersey Gov. Chris Christie (R) for his efforts in pursuing online sales tax legislation, arguing that the governor “instituted” an Internet sales tax although the online sales tax measure in question, which theoretically doesn’t increase a consumer’s tax liability for online purchases but does a better job of collecting use taxes, has already been passed by the governments of 19 states.