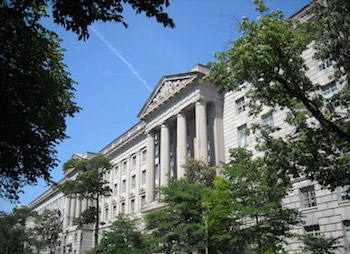 Earlier today the U.S. Department of Commerce issued a report titled White Paper on Remixes, First Sale, and Statutory Damages, which recommends amendments to U.S. copyright law that would provide more guidance and greater flexibility to courts in awarding statutory damages. According to the Commerce Department, the recommended amendments would ensure continued meaningful protection for intellectual property while preserving the dynamic innovation that has made digital technology so important to the American economy.

This new report follows up on issues first discussed in a 2013 Internet Policy Task Force Green Paper, Copyright Policy, Creativity, and Innovation in the Digital Economy, and is the product of two sets of written comments and five public meetings and roundtables conducted through the following year. The Green Paper provided the most thorough and comprehensive analysis of digital copyright issued by any administration since 1995 and noted the need for further analysis of the three policy issues that are the focus of the new report.

“Through extensive public consultations, the Internet Policy Task Force has produced a detailed analysis of important policy issues raised for copyright in the digital age,” said U.S. Secretary of Commerce Penny Pritzker. “Its recommendations will maintain strong and balanced copyright protection while preserving the free flow of information required for innovation and our digital economy to thrive.”

The Task Force report makes recommendations on three separate issues. As the title of the report suggests, these issues relate to statutory damages, the first sale doctrine and remixes.

With respect to statutory damages, which are authorized pursuant to 17 U.S.C. 504(c), the White Paper explains that the Task Force limited its inquiry on the level of statutory damages that may be assessed against individual file-sharers and against online services that may be secondarily liable for infringement of a large number of works. The Task Force recommended threes amendments to the Copyright Act:

The Task Force also supports the creation of a procedure for handling small claims of copyright infringement and believes that consideration should be given to the Copyright Office proposal to establish a small claims tribunal.

The creation of a small claims process, as good an idea as it really is, will likely prove as difficult for copyrights as it has been for patents thanks to the Seventh Amendment to the Constitution.

With respect to remixes, the Task Force acknowledged that it is important to continue to allow a broad range of remixes to thrive, ensuring that a vibrant fair use space coexists with effective licensing structures. Nevertheless, the Task Force concluded that there is insufficient evidence to warrant amending existing law to create a specific exception or a compulsory license for remix uses. The Task Force does, however, think it would be appropriate for the negotiated development of guidelines that provide greater clarity as to the application of fair use to remixes, as well as education aimed at broadening an understanding of fair use.

The report is a product of the Department of Commerce’s Internet Policy Task Force. The Task Force is made up of representatives from the United States Patent and Trademark Office (USPTO), the National Telecommunications and Information Administration (NTIA) and other Commerce Department agencies.