“The Ninth Circuit’s decision below continues that circuit’s inappropriate (and concerning) steady expansion of Rogers to any product or service that merely contains discernible expression.” – INTA amicus brief 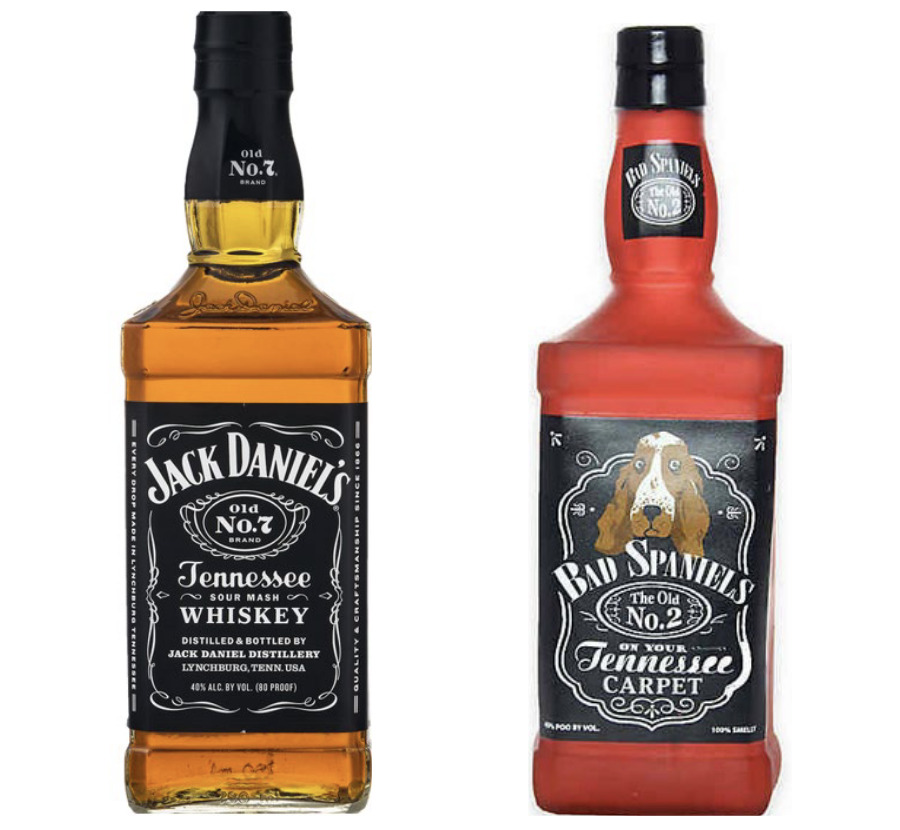 The U.S. Supreme Court yesterday granted a petition filed in August this year by Jack Daniel’s Properties, Inc. seeking clarification on whether the First Amendment protects VIP Products, LLC, a maker of dog toys that made humorous use of Jack Daniel’s trademarks for commercial purposes, against claims of infringement and dilution.

The High Court previously denied Jack Daniel’s petition in January of 2021, and the U.S. Court of Appeals for the Ninth Circuit “summarily affirmed” the district court’s summary judgment ruling for VIP on remand. In its ruling in 2020, the Ninth Circuit said VIP’s dog toy mimicking a Jack Daniel’s whiskey bottle was an expressive work entitled to First Amendment protection, reversing the district court’s initial holding that the toy infringed and diluted Jack Daniel’s marks and remanding the case back to the district court for a determination on the merits of the infringement claim. VIP in part argued at the time that Supreme Court review was unwarranted at the interlocutory stage.

In the latest petition, Jack Daniel’s is asking the Court to consider the following two questions:

In the 2020 appeal to the Ninth Circuit, the International Trademark Association (INTA) filed filed an amicus brief asking the full court to rehear its decision. INTA’s brief sought to “ensure the proper application of (i) Rogers v. Grimaldi, 875 F.2d 994 (2d Cir. 1989), and (ii) the Trademark Dilution Revision Act (“TDRA”)’s noncommercial use exception, 15 U.S.C. § 1125(c)(3)(C).” The brief argued that, until the present case, courts had limited application of Rogers to cases involving the use of trademarks in expressive works, but the VIP Products decision “improperly extends Rogers to the use of trademarks on any commercial good arguably having some ‘expressive’ quality.” INTA and five other amici have filed briefs with the Supreme Court supporting the latest petition as well.

Jack Daniel’s noted in its August 2022 petition that the Ninth Circuit’s ruling “departs from the decisions of every other circuit to decide this question” and claims it “paves the way for companies like respondent to unleash mass confusion in the marketplace.”

Under the Rogers test, which attempts to balance free speech and trademark rights, a plaintiff must show that the defendant’s use of the mark either (1) is not artistically relevant to the underlying work or (2) explicitly misleads consumers as to the source or content of the work. The Rogers test has traditionally been applied only to artistic works, not to commercial goods. Jack Daniel’s and the amici argue that the Ninth Circuit thus improperly extended the test in a manner that has serious implications for trademark owners.

In its respondent’s brief filed October 17, 2022, VIP Products accused Jack Daniel’s of “waging war” against it and said, “It is ironic that America’s leading distiller of whiskey both lacks a sense of humor and does not recognize when it—and everyone else—has had enough.” VIP posed its own questions for the Court:

VIP argued that it has never sold whiskey or other products that would compete with Jack Daniel’s and that the petitioner and the brand owner amici supporting it are really challenging “the balance Congress and the courts have struck between trademark rights and First Amendment rights, and with the principle that the First Amendment does
not permit ‘the trademark owner … to control public discourse’ about its trademark.” VIP explained:

“No one—not a child, not a dog—is going to be harmed by VIP’s parody. If there is some grand principle at stake, this is simply not the right case to be raising it.”

“None of them comes close to a conflict. Certainly the Ninth Circuit did not perceive a conflict, and for good reason: two of the courts did not even acknowledge the Rogers test, and the third declined to apply it because the facts were clearly distinguishable.”

In Harley-Davidson, for example, “[t]he court declined to apply Rogers because there was humor but no parody: defendant’s “mark makes no comment on Harley’s mark; it simply uses it somewhat humorously to promote his own products and services, which is not a permitted trademark parody use,” said VIP’s brief. VIP’s dog toy, on the other hand, is a parody product representing “fully protected, noncommercial speech,” it added.

A Concerning Expansion of Rogers

But INTA in its latest amicus brief disagreed, once again explaining that the Ninth Circuit’s decision does create a split in its application of the Rogers test outside of “traditionally expressive or artistic works”:

“Since the Second Circuit’s decision in Rogers, all other circuits but the Ninth have faithfully limited Rogers to traditionally expressive or artistic works like movies, art, books, and the like. The Ninth Circuit’s decision below continues that circuit’s inappropriate (and concerning) steady expansion of Rogers to any product or service that merely contains discernible expression. This unwarranted expansion beyond the roots of Rogers creates a sharp circuit split on how to balance competing claims of trademark protection and free speech in the context of ordinary commercial products. The Ninth Circuit’s decision threatens a trademark infringement framework that has been intact and applied for nearly a century.”