“NFT purchasers have been enticed by the idea of marrying the digital image to derivative rights. This practice should not be dismissed solely because of the risks, but purchasers should exercise caution when acquiring these assets.” 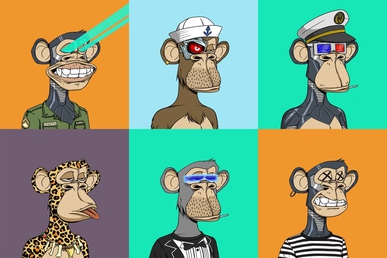 Can something called a “Bored Ape” be embodied in a non-fungible token (NFT) and be associated with smart contracts? How could this present unique and challenging issues regarding copyright law? Over the course of the last two months, the general public has tracked what started out as a phishing scam involving actor Seth Green’s NFT from the Board Ape Yacht Club. It then evolved into a public quest to regain the NFT and the rights to develop a broadcast program based on the character depicted in the digital image. The trials and tribulations related to Seth Green’s efforts to ultimately regain his “lost” NFT made for interesting media clicks. It also raised awareness to copyright issues that are yet to be fully resolved. Seth Green may rest easy knowing he is again the rightful owner of his Bored Ape NFT, but the legal community should not be as quick to move on.

The Bored Ape Yacht Club is not unique to Seth Green. According to its website, the Board Ape Yacht Club is a collection of 10,000 unique NFTs created by four friends who “set out to make some dope apes, test [their] skills, and try to build something (ridiculous).” Numerous celebrities have been associated with the purchase of individual Bored Ape NFTs, which has allowed the collection to be valued in excess of USD 1 billion. The popularity and purported valuation of the Bored Ape Yacht Club collection is both interesting and perplexing, and quite often elicits an involuntary shake-of-the-head response. But the celebrity “must have” status is not what makes this particular set of NFTs conducive to a great copyright discussion. Rather, and more importantly, when the original authors created the Bored Ape Yacht Club collection, they also made it clear that each holder of an individual NFT would have full commercialization rights to their individual ape depicted in the NFT. According to Fast Company’s review of the Bored Ape Yacht Club, “whoever owns a Bored Ape can spin it into whatever film, music, TV, book, or media project they want.” It was the commercialization rights and not the digital image that were the primary concern for Seth Green, and they present us with a great legal issue for discussion.

The Saga of the Stolen Ape

Seth Green alleged that he became victim of a phishing scam where a wrongdoer was able to get access to his Ethereum Blockchain software wallet application. Access to Green’s Blockchain software wallet application in turn provided access to his NFTs, which included an individual Bored Ape NFT from the Bored Ape Yacht Club collection. The stolen NFT included not only the digital image of the Bored Ape but also the full set of rights under copyright law for commercializing the Bored Ape. These rights were most likely embodied as a smart contract stored on the Ethereum Blockchain. According to Green, an alleged good faith purchaser acquired the stolen NFT from the wrongdoer, all of which was documented in the transaction record stored on the Blockchain. Green later discovered the unauthorized transfer and publicly declared that he faced the potential of not only losing ownership of the specific digital image embodied in the NFT, but also losing the rights to the commercialization efforts that were allegedly underway. After some public complaining to Twitter and shelling out USD 260,000 to the good faith purchaser to reacquire the stolen NFT, the Seth Green saga came to a close, but not before creating a question that did not necessarily have a clear answer.

Since the issue involving Seth Green appears to be resolved, we are unlikely to learn the details regarding the theft of the NFT and the subsequent, alleged good faith purchase of the stolen NFT.

Nevertheless, the general facts of the Bored Ape NFT saga raises the question:  Should the good faith purchaser doctrine apply to NFTs? If so, do the unique aspects of NFTs and the information embodied in NFTs create unique issues under contract or copyright law?

In the unique context of NFTs, an initial question could be whether an unauthorized transfer of control/ownership of the NFT data embodied in the Blockchain could ever be subject to the good faith purchaser doctrine.

The unique aspect of the Bored Ape Yacht Club collection is that it includes full commercialization rights in the NFT, such as via a smart contract. This raises another question: Does the doctrine of a good faith purchaser extend to protect copyright rights beyond the distribution right most traditionally associated with the doctrine? Given that context, the good faith purchaser doctrine for NFTs – or an iteration thereof – may depend on the specific facts of each scenario. However, there are other important factors to consider. Was the good faith purchaser aware of the derivative rights that were part of their purchase? Does the smart contract represent a valid form of transfer of the full commercialization rights? Would equity principles support the purchase of rights that extend beyond the transaction of the digital image embodied in the NFT?

These questions are unsettled, and there is very little precedent. This realm of inquiry currently resides in the gray space of speculation. Rarely has intellectual property law been proactive in solving emerging issues.

Consideration of property and contract principles are highly relevant to this inquiry and should be balanced against principles of equity. NFT purchasers have been enticed by the idea of marrying the digital image to derivative rights. This practice should not be dismissed solely because of the risks, but purchasers should exercise caution when acquiring these assets. The spotlight is beginning to shine upon market priorities and insuring client assets in the digital era. Much consideration should be given to the role of smart contracts in intellectual property law and the place NFTs may increasingly hold in the acquisition and transferring of these rights. Only time will tell.

Mauricio Uribe Mauricio Uribe is a Partner with Knobbe Martens. He has extensive experience in comprehensive client counseling in all aspects of intellectual property law. He has counseled various clients on patent [...see more]

Melis Tirhi Melis Tirhi is a 3L at LMU Loyola Law School and a summer associate at Knobbe Martens. Prior to law school, Melis studied Bioengineering at Northeastern University and received her [...see more]