“Recent empirical evidence suggests that many of the alleged ills that have been associated with the overenforcement of intellectual property rights simply fail to materialize in industries that rely on standard-essential patents.” – ICLE scholars

Four scholars with the International Center for Law & Economics (ICLE) have sent comments to the European Commission urging against any changes to the EU’s legal framework for licensing of standard-essential patents (SEPs) that would limit SEP holders’ ability to seek injunctions against alleged infringers. The ICLE scholars write: “It is simply not helpful for a regulatory body to impose a particular vision of licensing negotiations if the goal is more innovation and greater ultimate returns to consumers.”

The comments come in response to the Commission’s February 2022 Call for evidence, which explained that “some users have found that the system for licensing SEPs is not transparent, predictable or efficient. This initiative seeks to create a fair and balanced licensing framework and may combine legislative and non-legislative action.” The feedback period ended May 9 and asked stakeholders to submit their views on: “(i) transparency; (ii) the concept of licensing on FRAND terms and conditions, including the level of licensing; and (iii) effective enforcement.”

The ICLE comments were submitted on May 8 and were authored by Geoffrey Manne, ICLE President & Founder; Dirk Auer, ICLE Director of Competition Policy; Kristian Stout, ICLE Director of Innovation Policy; and Ben Sperry, ICLE Associate Director, Legal Research. They note that the current system works and that “recent empirical evidence suggests that many of the alleged ills that have been associated with the overenforcement of intellectual property rights simply fail to materialize in industries that rely on standard-essential patents.” In support of this statement, the scholars point to the 2015 paper by Alexander Galetovic, Stephen Haber & Ross Levine, “An Empirical Examination of Patent Holdup,” which uncovered no empirical support for popular predictions about the evils of patent holdup, and, to the contrary, found that “SEP-reliant industries have the fastest quality-adjusted price declines in the U.S. economy.”

The authors make three main arguments for preserving the current framework for SEPs: 1) the SEP space is extremely complex and thus courts are in a better position to unravel it than regulators; 2) weakening SEP protections would have unintended “second-order effects” that would compromise startups’ ability to access capital markets, as well as the West’s technological leadership; and 3) the current system confers important benefits, such as the advantage of injunctions over damages awards and “firms’ ability to decide at what level of the value chain royalties will be calculated.”

“Where possible, policy should prefer allowing parties to negotiate at arm’s length and to resolve disputes through courts,” explain the comments. “In addition to maintaining the sometimes-necessary remedy of injunctive relief against bad-faith implementers, this approach allows courts to explore when injunctive relief is appropriate on a case-by-case basis.”

The authors point out that one of the most controversial aspects of SEP licensing – the specter of patent holdup – is really based on a misunderstanding of the patent licensing dispute process. “It is ironic that the remarkably collaborative [standard development organization] SDO process nevertheless engenders endless—yet unsubstantiated—claims of systematic abuse by the SEP-holder participants in the form of patent hold-up and royalty stacking,” explain the comments, which cite Kristen Jakobsen Osenga’s paper, Ignorance Over Innovation: Why Misunderstanding Standard Setting Organizations Will Hinder Technological Progress, to illustrate their point. Osenga wrote:

[M]any claims of patent hold-up and royalty stacking are simply related to disagreements over how much the licensee would prefer to pay versus how much the patent holder is requesting. The fact that these disagreements are not uncommon does not mean, however, that patent hold-up or royalty stacking is taking place. After all, businesses frequently engage in aggressive price negotiations over all sorts of products, and IP licensing is no different. 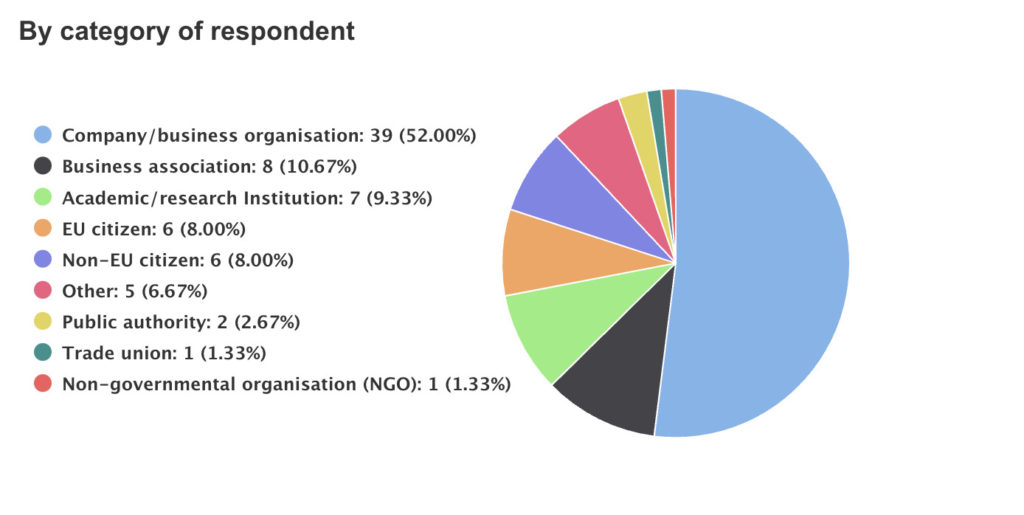 According to the Commission’s web page on the consultation, it received a total of 75 submissions, mostly from the business community. The most submissions came from Germany, with 24, followed by the United States with 11.

The Commission first announced an initiative to improve transparency and predictability in the SEP licensing process through reform of the system in its 2020 “Intellectual Property Action Plan”.