“There is still meaningful protection for many inventions in the life sciences area. We just have to deal with the law as it is.” – Dr. Douglas Bucklin 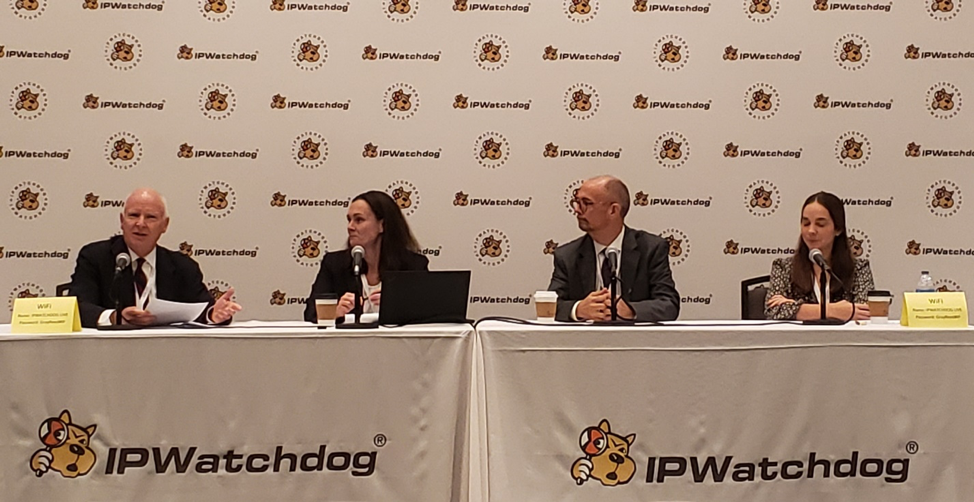 On the final day of IPWatchdog LIVE last week, a panel titled “Jurassic Patents: Genetic Engineering and the Future of Life Science Innovation,” moderated by president and CEO of the PCT learning center and founding partner of Berenato & White, John White, examined the challenges of patenting discoveries in the life sciences in light of recent legal developments. The panel included patent litigator and partner at Akin Gump, Dr. Rachel Elsby, patent prosecutor and shareholder with Volpe Koenig, Dr. Douglas Bucklin, and food and drug lawyer and counsel at McGuire Woods, Kae Gruner.

Dr. Elsby began by discussing the state of patent law currently in litigation, by turning to 35 U.S.C. §101 and §112. Section 101 states that anyone who invents or discovers a new and useful process, machine, manufacture, or composition of matter or a new and useful improvement thereof is entitled to a patent. Section 112, the enablement provision, lists requirements for a patent’s specification, which must contain a written description sufficient to enable another person of skill in the art to make or use the invention. Noting the recent Myriad and Mayo decisions of the last decade, Dr. Elsby explained that the rate of defendants using Section 101 as a defense to infringement has skyrocketed. That said, however, Section 101 is not the biggest problem for litigators – Section 112 is. Whereas Section 101 challenges are manageable for patent litigators, Section 112 challenges are not so easy because, according to Dr. Elsby, it is much more difficult to sufficiently enable the claims. In other words, it’s difficult to show an examiner early on that a product in the life sciences will work the way you say it works, when research is still ongoing. Furthermore, the courts do not appreciate the intricacies of the technologies being claimed and the claim drafting issues that come with them, thus presenting an opportunity for infringers to successfully challenge the patents under Section 112 for lack of enablement.

Dr. Bucklin joined the discussion, noting that, for patent prosecutors, “it looks bleak; doom and gloom.” He agreed that in drafting, Sections 101 and 112 are both a huge problem. In order to provide clarity, he said, the USPTO provides examples of properly drafted claims under Section 101. However, these examples are inconsistent. So, the only path forward is to take the invention and map it to the closest example possible for that invention, even though there are inconsistencies between examples. He also noted that the rubric used by examiners in assessing claims has grown from a two-step process to a five or six step process with multiple sub-questions, hampering predictability in the prosecution of claims. “A thorough understanding of how the examiners use that algorithm in the case is the place the prosecutor has to start,” he said.

A High Level of Specificity is Necessary

Regarding Section 112, Dr. Bucklin explained that when counseling clients he makes it clear that a high level of specificity is paramount. Because of the rapid developments in life science technology, quick filing of applications is necessary. However, the inventors may not yet have examples to prove that the invention does what the claims say it does. It isn’t good enough to say, for instance, that the invention is an antibody that binds to something, said Dr. Bucklin. He has to be able to lay out the sequence of it to the examiner. He further expounded on treatment claims:

In a treatment claim, you have to enable it by showing both the treatment dose and how it works . . . so how do you show the examiner it works the way you said it works? If you don’t have that, you’ll have an enablement battle.

Shortening the Path to Enablement

In order to counteract this, patent applications in the life sciences can now easily be upwards of a daunting 100+ pages in length, as inventors try to cover every possible scenario for enablement.

White jumped in briefly to agree and impart his admiration for life science patent practitioners: “This is the affidavit practice, they don’t just have to say it, they have to prove it . . . You do what you can with what you have, to be the first to file. You guys just have to roll with what you’ve got. When it’s all dissected in 15 years in front of a district court sometime, you’ll have to have guessed right.”

There may yet be some scaling back in the length of applications though, said Dr. Elsby, who noted the recent Amgen case, in which the court rejected a 100+ page written description as not actually satisfying the enablement requirement:

[The court essentially said] sure you gave us a roadmap [to enable the invention], but someone coming after you has to do just as much work as you did . . . so you didn’t shorten the path. The solution may be to shorten the path to get there.

Contributing his own idea on how to shorten the path to enablement, Dr. Bucklin offered: “I’d ask the inventor, have you made the antigen just a little bit different? Perhaps the process to make the antibody is what’s special about what you’ve done.” However, he did recommend that life science practitioners keep writing specifications to include all embodiments.

As far as the regulatory side of things, Gruner expressed how vital it is that the pharmaceutical client understands just how valuable FDA exclusivity can be as an alternate form of protection, as opposed to patents. Exclusivity is a period of time when a brand-name drug is given market protection against generic competitors, through delayal of FDA generic approvals until that exclusivity time period has lapsed. Exclusivity is an important consideration, said Gruner, because it can last years, just like patent protection. This is especially true regarding biologics, which have a potential exclusivity period of up to 12 years and face difficulty in the patenting realm due to stability issues and development challenges. Agreeing with this sentiment, Dr. Elsby chimed in: “Regulatory exclusivity is better protection for biologics than patents.”

Offering their final words of advice to the audience, the panel suggested the following:

There are difficult issues in the law for pharmaceuticals but there’s still a lot of innovation happening, we will move forward and these things will be protected. – Dr. Rachel Elsby

Continue to write your applications as if all this bad stuff didn’t happen, but add embodiments for how you could approach it in the future…draft your claim set for where you want to go . . . There is still meaningful protection for many inventions in the life science area. We just have to deal with the law as it is. – Dr. Douglas Bucklin

Understanding the business strategy of your clients is crucial in determining what type of protections to seek. Make sure that no matter what part you play in the big picture of patent strategy, that the various stakeholders are on the same page, and make sure you understand their business purpose. There’s value to diversifying [protections] . . . make sure that your strategy is consistent and [aligns with] the bigger picture, to protect that product over its lifetime. – Kae Gruner