The Washington Football Team’s Trademark Journey: Over the Bumps and Full Speed Ahead

“The USPTO has refused to register the Washington Football Team’s trademarks. In the interim, the Team can rely on its common law rights in the marks to take legal action against counterfeit and infringing clothing items, and even perhaps rely on registrations for entertainment services.” 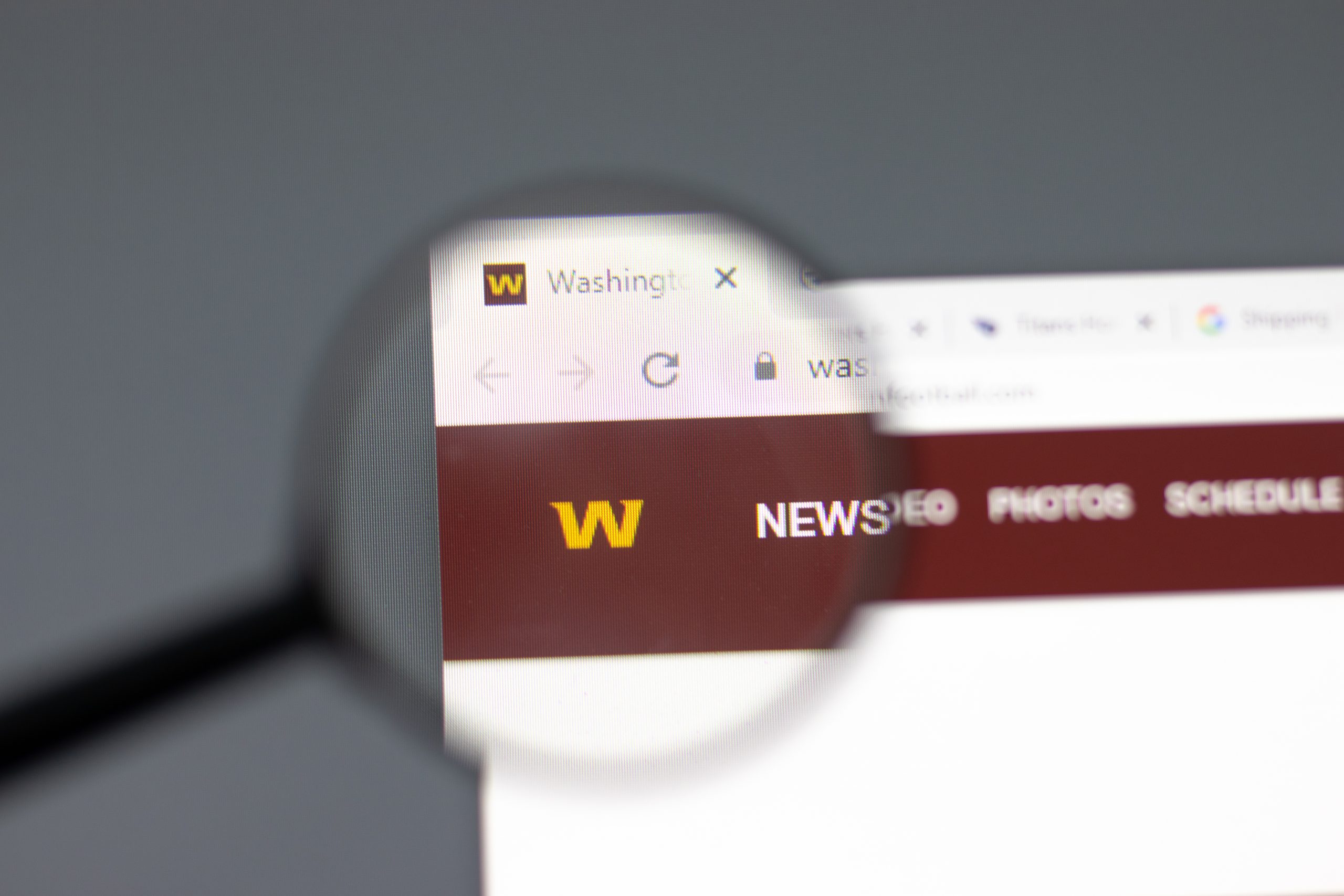 You’ve probably heard that the U.S. Patent and Trademark Office (USPTO) has refused to register the current name of the Washington NFL franchise – “The Washington Football Team”. This is just the latest road block in the long running saga of the Team’s name. But actually, on closer look, it’s more like a small bump, and here is why.

After years of ultimately successful litigation, on July 13, 2020, the Washington NFL franchise finally succumbed to what had become not only a public, but a very damaging corporate sponsor, outcry to change the Team’s name and logo. The Team publicly announced on that day that it would use the name “Washington Football Team” until a new name and logo were selected.

On July 23, 2020, the Team unveiled its 2020 uniforms. On that same day, the Team filed two applications for trademark registration with the USPTO: one for the “standard character” mark, WASHINGTON FOOTBALL TEAM, and the other for the stylized version:

On June 18, 2021, the USPTO issued an Office Action in each of three applications, refusing to register the marks on substantive grounds.

Meanwhile, the Team had embarked on a process to select a new trademark and logo, engaging the public and memorializing the “journey”. On July 12, 2021, the Washington Post reported that the Team’s President, Jason Wright, indicated the organization would still be using THE WASHINGTON FOOTBALL TEAM name for the 2021 season, and would introduce the new Team moniker and logo for the 2022 season.

All three of the Team’s applications cover clothing items, including hats, jerseys, sweatshirts and sneakers, and “Entertainment in the nature of professional football exhibitions and games.” All of the applications as filed were based on an intent to use the mark(s).

When a USPTO Office Action issues refusing trademark registration on substantive grounds, the applicant has six months to respond; here, that date is December 18, 2021. If no response is filed within the six month period, the application will be declared abandoned. If the applicant files a response contesting the grounds for the Examiner’s refusal, and the Examiner maintains the refusal, that refusal becomes final, unless some new issue was raised by the applicant’s initial response.

Although a request for reconsideration can be filed with the Examiner after a final refusal is issued, essentially the only administrative remedy available to the applicant at this juncture is to file an ex parte appeal with the Trademark Trial and Appeal Board (TTAB) of the USPTO. The ex parte appeal process typically takes at least six months. Moreover, it is difficult for the applicant to control this process in terms of timing; an applicant cannot even file an appeal until either a final refusal to register is issued, or the Examiner has twice refused registration on the same grounds.

In the case of a Section 2(d) refusal, the Applicant also has the option of petitioning the TTAB to cancel the cited registration. When that approach is taken, the application will be suspended pending the outcome of the cancellation proceeding. Unless there is a default by the defendant in the cancellation action, this process will take at least several months, if not years.

Options for the Washington Football Team

With respect to the Section 2(e)(2) refusal, the Team has two options available to it, neither of which requires persuading the Examiner to agree the marks are not primarily geographically descriptive. First, as the Examiner has indicated, the Team can seek registration of the marks on the Supplemental Register.

The USPTO Examiner has indicated in the Office Actions that amendment to the Supplemental Register may not be available because the applications are based on an intent to use the mark(s), rather than actual use in commerce. However, the Team obviously has used the marks for the entertainment services (football games), and at least for some of the listed clothing items. Therefore, the Team can file an Amendment Alleging Use for those goods and the services, and proceed with registration on the Supplemental Register.

There also is a procedure for seeking registration on the Principal Register under another Trademark Act provision, Section 2(f), by establishing that the mark has acquired distinctiveness with respect to the applicant – that is, that the relevant purchasing public views the applied-for mark as identifying a single source for the goods/services in question (the applicant) rather than merely as a geographic or descriptive term. In most circumstances, proof of use of the mark by the applicant for at least five years will be sufficient to establish acquired distinctiveness. On the other hand, in the absence of evidence of substantial advertising and sales, and public recognition of the applied-for mark, it is very difficult to establish acquired distinctiveness based on less than two years’ use. Nevertheless, it is not impossible, and the circumstances here would seem ripe for attempting to make such a showing,

With respect to the Section 2(d) refusal based on the prior existing registration, the options are less straightforward. However, since this basis for refusal to register applies only to the clothing items listed in the Team’s applications, one easy (although only partial) fix is to divide each of the applications into one for just the clothing items, and another for the entertainment services. The services applications then could proceed to registration, assuming the Section 2(e)(2) issue is resolved, as discussed above.

As to clothing, some sort of agreement with the owner of the cited registration, either an assignment (purchase) of the registration or a consent to register, would be the quickest, easiest fix. As indicated above, filing a cancellation action or appeal of the Examiner’s decision with the TTAB also are available options, but even if the Team succeeds—hardly a given—the timing makes this path less than optimal. In the interim, the Team can rely on its common law rights in the Washington Football Team marks to take legal action against counterfeit and infringing clothing items, and even perhaps rely on registrations for entertainment services to seek Lanham Trademark Act remedies, as well.

But the Washington Football Team is on a new path; a “journey” for a brand new trademark and team logo. According to Team CEO Wright, the organization has very big and expansive brand marketing, business and licensing plans for that new moniker and logo, beginning sometime early in 2022. He has described it in news reports as the centerpiece of the organization’s future. And once that name and logo change occurs, the Washington Football Team merchandise will fade away, becoming relics of the Team’s past, maybe even collectibles. The absence of a federal trademark registration for “Washington Football Team” for clothing items, just like the Team’s “R” word name and logo, will be firmly in the organization’s rear view mirror, well over that bump in the road.

Marsha Gentner is a Senior Counsel in Dykema’s Intellectual Property Group. Ms. Gentner focuses her practice on the management of global trademark portfolios. In addition to filing and maintaining an extensive docket [...see more]