Don’t Be Fooled by His Patent Purge: Elon Musk is Just Another Hypocritical Tech Billionaire 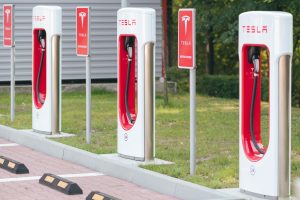 In 2014, Elon Musk made Tesla’s patents available for anyone to use for free, stating that “technology leadership is not defined by patents.”  Earlier this month, Musk announced again that he had released all of Tesla’s patents, promising the company “will not initiate patent lawsuits against anyone who, in good faith, wants to use our technology.”

Musk believes patents only serve “to stifle progress” and that by releasing his patents he can help get progress moving again—and that progress will somehow win the fight against climate change.

But do patents stifle progress, and will releasing patents really have this result?

The patent system still works today as it did the in the antebellum period, when the sewing machine was invented. Elias Howe invented the lock-stitch. That is where a needle passes through the cloth with a thread, the thread is then lock-stitched on the underside of the cloth, and then the needle is pulled back through the cloth, pulling the thread with it. The fabric is moved a short distance by a feed and the process repeats for a second stitch.

Had Singer not known about Howe’s lock-stitch invention, Singer would not have known to improve Howe’s feed. But it was not just Singer improving Howe’s sewing machine. More than 200 sewing machine companies sprung up at the same time, each with its new sewing machine inventions (levers, bobbins, thread tensioners, etc.). Most of these inventions were also patented. The next time you look at the complicated mechanical inner workings of a sewing machine, know that most of the various parts were invented over 150 years ago by different people engaged in a head on competition for the largest consumer market ever created to date.

It is exceedingly rare that an inventor comes up with something completely new. Virtually all inventions are the result of combining existing elements and adding something new. When Howe invented the lock-stitch, existing machines used threaded needles, tied threads, and fed fabric through machines, but it took Howe’s insight and experimentation using all those existing pieces to figure out how to tie a knot on the underside of fabric after a single thread was pushed through with a single needle.

All of the things that Howe combined were disclosed to the public in one way or another, many through the patent system. Patents promote progress because of the disclosure to the public of the invention. Anyone can improve it, combine it, or invent around it. None of that is possible if the invention is not disclosed.

Musk clearly does not value how patents promote progress. But he does value trade secrets. Tesla is known for keeping a tight lid on its trade secrets. They protect these trade secrets as far as the law will allow them, including suing employees and the rest of the industry.

Tesla recently acquired battery manufacturer Maxwell Technologies’ company for $218 million to learn its trade secrets for dry electrode batteries. Obviously, Musk values trade secrets, and he must believe that they do not stifle progress, or he would have released them to the public as well.

Trade secrets have become the preferred invention protection choice of many tech multinationals. Many of these companies have huge numbers of customers with thin products that run on or behind internet browsers. Most inventions in these fields can be hidden behind the browser, buried in the bowels of a datacenter, encrypted in code, or embedded in a chip and thus easily protected by trade secrets.

In emerging fields, technology advances at a lightning fast pace. Improvements invented by others could bring disastrous disruption to incumbents. In Tesla’s market for electric cars, dry electrode batteries may be that disruptive technology given the $218 million price tag Tesla paid to obtain the trade secrets.

The greatest threat to the very existence of these huge multinationals is creative destruction at the hands of someone who invents something that their customers want that they did not think of first.

As a result, none of these huge multinationals wants anyone else to learn how their inventions work because someone else could improve it, combine it, or invent around it, which could disrupt their business.

Trade secret protection for inventions that could otherwise be patented is bad public policy because it stifles the progress of innovation and it consolidates money, markets and power into a few huge corporations that become immune to the threat of creative destruction.

But back to the self-serving hypocrisy of Elon Musk. If Musk truly wants to promote progress, thereby saving the world from climate change, he would patent his inventions and protect his patents jealously, and he would release his trade secrets for everyone to use freely—especially the trade secrets he just acquired for dry electrode batteries.