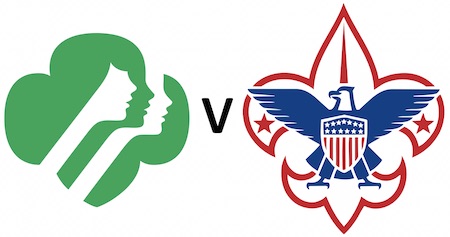 The Girl Scouts of the United States of America have filed suit to force the Boy Scouts of America to put the “Boy” back into “Boy Scout.” The two venerable youth organizations will soon face off in a high-stakes trademark battle in federal court (click here to read the full complaint).  The Girl Scouts filed a trademark complaint in November 2018 in the U.S. District Court for the Southern District of New York. In it, the Girl Scouts claim the Boy Scouts’ use of the trademarks SCOUTS, SCOUTING and SCOUTS BSA without the word “boy” for programming for girls has and will continue to create confusion for families seeking to enroll their daughters in Girl Scouts.

Girl Scouts officials reacted strongly to the news that the Boy Scouts would begin programming for girls. In a letter to her Boy Scouts’ counterpart, Girl Scouts National President Kathy Hopinkah Hannan said it was “unsettling that BSA would seek to upend a paradigm that has served both boys and girls so well through the years by moving forward with a plan that would result in fundamentally undercutting Girl Scouts of the USA.”  It appears that the final straw for the Girls Scouts was the recent launch by the Boy Scouts of a marketing campaign targeted to girls, featuring the tagline “Scout Me In,” along with the reveal that the Boys Scouts program for middle and high school age girls and boys would rebrand as SCOUTS BSA.

The crux of the Girl Scouts’ claims is that their organization owns the exclusive right to use the trademark SCOUT (and variations) for enrichment programing for girls, and that the Boy Scouts’ use of the terms in connection with enrichment programming for girls violates the Girl Scouts organization’s trademark rights.  According to the complaint, use by the Boy Scouts of SCOUTS in connection with programming for girls will do more than create consumer confusion. “It will also marginalize the GIRL SCOUTS Movement by causing the public to believe that [the Girl Scouts’] extraordinarily successful services are not true or official ‘Scouting’ programs, but niche services with limited utility and appeal,” attorneys for the Girl Scouts write in the complaint.

In the complaint, attorneys for the Girl Scouts also shared various promotional materials that they say create confusion in the marketplace. For example, a Boy Scout troop in Texas created an online sign-up form for “Boys/Girls Scouts of America.” Other troops in New York and Washington State announced plans to form “Girl Scout BSA Troops.” Numerous such examples are listed in the complaint.

The Girl Scouts’ legal position is at once a nuanced parsing of trademark rights in the SCOUT trademark (and its variations) and a straightforward application of the principle that two organizations can own rights in the same trademark for different services.  The Girl Scouts admit that the Boy Scouts have the right to use the SCOUT trademark, but only in connection with programming for boys.  In its request for relief, the Girl Scouts ask the court to order the Boy Scouts to always use another distinctive word in front of “Scouts” when referencing programs for girls.

The Boy Scouts has yet to file its response to the suit and it is safe to assume that it will “be prepared” to defend its outreach to girls.  Whatever the legal arguments, there is more at stake in this case than the right to call a troop of kids “Scouts.” Although the two organizations have long been bedrocks of American society, they are both struggling to remain relevant  in an age where gender roles are being redefined and when kids spend a lot more time in front of the glow of a screen than a campfire.  The Boy Scouts of America reported 2.3 million youth members in 2016, a decline from 2.8 million in 2012. In the early 1970s, Boy Scout membership topped six million. Likewise, Girl Scout membership has dropped by 27 percent since 2003. According to a Wall Street Journal report, Boy Scouts’ leadership is considering filing for Chapter 11 bankruptcy protection, as the organization faces significant legal bills over the handling of sexual abuse claims.

From an organizational perspective, both organizations are looking to maintain and grow their membership.  Whereas in the past, the two organizations might have been seen as complementary of one another’s purposes, the Boy Scouts’ decision to enroll girls in its programs traditionally offered to boys positions the Boy Scouts and the Girl Scouts as direct competitors.  The outcome of this case may determine which of these organizations is able to pull out of the declining membership trend and maintain its legacy into the future.

Tiffani Otey is an is a Trademark Attorney in Womble Bond Dickinson‘s Winston-Salen, NC Office. Her experience includes all aspects of trademark protection, from selection of an available trademark, to protection of [...see more]