USPTO Director Iancu tells AIPLA annual meeting: ‘It is a new day at the PTAB’ 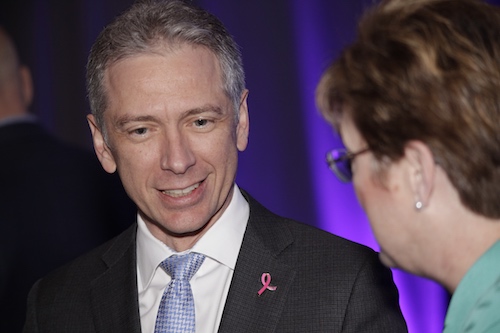 Andrei Iancu, Under Secretary of Commerce for Intellectual Property and Director of the United States Patent and Trademark Office, delivered the keynote speech (read the full text) earlier this afternoon during lunch at the American Intellectual Property Law Association annual meeting at the Marriott Wardman Park Hotel in Washington, DC. Director Iancu began his speech by saying there will be a “new day” at the USPTO for the Patent Trial and Appeal Board (PTAB).

Director Iancu announced that within a matter of days the USPTO will formally publish a new policy relating new amendment procedures that will be used in America Invents Act (AIA) trials. “Claim amendments have been relatively rare… and infrequently granted,” Iancu said. “Some have suggested that parties have stopped trying to amend because they see the process as futile…. It is important to ensure that post grant proceedings are not all or nothing.”

Director Iancu pointed to the fact that in August the USPTO updated the trial practice guide that applies to the PTAB, and in September published two new Standard Operating Procedures (SOPs), specifically pointing out that the first new SOP makes expanded panels a rare event, and the second SOP creates a Precedential Opinion Panel (POP) to “enable top agency management to address some of the thorniest issues… and to speak with one voice.”

Since Director Iancu was confirmed to lead the USPTO many have suspected that he would make major changes to the Patent Trial and Appeals Board (PTAB). Director Iancu has delivered on those expectation in recent months, starting first with the trial practice guide, moving to the new final rules requiring the PTAB to apply the same claim construction rules applied in federal district court (i.e., changing from the broadest reasonable interpretation examination standard to the Phillips standard).

“It is a new day at the PTAB,” Iancu forcefully stated.

This morning the USPTO also started a soft launch of its new look website, which Director Iancu discussed during his keynote.