Copyright and Tattoos: Who owns your ink? 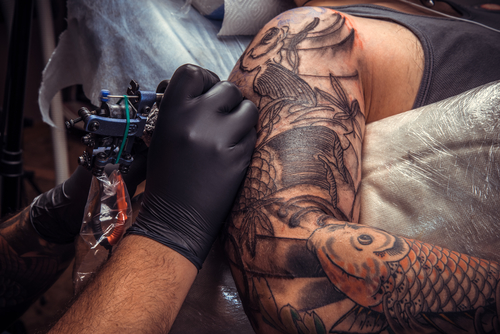 As of 2012, one in five adults in the United States have at least one tattoo.  While some designs are simple, many are incredibly complex, original works of art.  However, since tattoos are designed to be permanent, and often placed to be seen, the question arises – who owns the copyright to that artwork? And how can, and can’t, the owner display it?

There are a few cases that have arisen in recent years that may shed some light on the rights of the tattoo artist and the right of the human owner of the tattoo.  The issue recently gained notoriety because of the movie The Hangover: Part II.  A character in the movie wakes up after a night of drinking with a replica of Mike Tyson’s iconic famous tattoo on his face.  Tyson’s tattoo artist had registered the design with the United States Copyright Office and sued for copyright infringement.  While the judge, in a hearing, seemed to clearly believe that tattoos could be copyrighted, the case settled out of court without a definitive judgement. Unfortunately, there are no cases to date that definitively answer the questions around copyright infringement and tattoos.  With a new case filed by a tattoo artist in April 2018, concerning a tattoo he placed on WWE wrestler Randy Orton, which appeared in the WWE 2K16, 2K17 and 2K18 video games, it is important to determine what we do know about whether tattoos can be copyrighted, and who owns what rights with regard to their use and reproduction.

Rights of the Artist

According to 17 U.S.C. § 102, copyright protection exists “in original works of authorship fixed in any tangible medium of expression… from which they can be perceived, reproduced, or otherwise communicated.”  Tattoos do seem to meet the perception and reproduction standard, as they can be seen on exposed skin and reproduced in photographs (and as digital representations in video games).  Tattoos also meet the “fixed in any tangible medium of expression” standard.  The question seems to be, for each particular tattoo, as to whether it is an “original work of authorship.”

The opinion of the Copyright Office seems to be that tattoos are indeed worthy of copyright protection – on April 19, 2011, the tattoo artist responsible for Mike Tyson’s tattoo received a registration for it as artwork on a 3D object.  It is notable, however, that Tyson signed a release stating that “all artwork, sketches and drawings related to [his] tattoo and any photographs of [his] tattoo are property of Paradox-Studio of Dermagraphics” (the business name under which the tattoo artist worked)

However, not all tattoo artists currently have such releases on hand, or deal with clients famous enough to be concerned.  Usually, there is an understanding, as discussed below, that the tattoo recipient has the right to live their life without concern about the tattoo being seen or used in a selfie.  However, case law suggests that a line is crossed when a design is misappropriated. That said, if a tattoo artist wants to set clear limits on the commercial use of their artwork, having a release on hand might not be the worst idea.

Rights of the Subject

For the average Joe or Jane, the question of copyright ownership over their tattoo is likely a low priority.  Whether getting a Mickey Mouse tattoo on your ankle infringes Disney® copyrights may be exciting dinner conversation, it probably will not end in a lawsuit. Additionally, it’s generally understood that those getting tattoos will be displaying them – on their person, in pictures, and on social media.  Further, since such use is likely non-commercial, and probably is protected by fair use.

However, for celebrities, it should be part of the pre-application discussion.  Commercial use regarding a celebrity which prominently displays a tattoo may run afoul of the artist’s copyright.  It is still an unsettled question whether there is an implied right of reproduction that would allow for images to be taken of a celebrity that show the tattoo without consulting the tattoo artist for permission.

What to do about that Tattoo

Most of the tattoo cases to date share an important feature – the tattoo was used in a commercial work and was not displayed in its original state – e.g. it was not on the body of the celebrity who initially received it.  In the case concerning the WWE video games, the tattoo was reproduced on a digital rendition of the wrestler in question.  In The Hangover: Part II, the tattoo was depicted on an actor who was not Mike Tyson.  However, many entities are not taking the chance that a future court may grant additional protection for different circumstances.  For example, the NFL Players Association has asked all football players to get releases from tattoo artists before any future ink is applied.

Without a legal decision as a guide, it is not clear exactly where copyright protection may extend.  However, there may be some steps that can be followed in order to avoid a costly judgement or settlement.  First, the tattoo must be copyrightable subject matter.  For example, a tattoo must be both original, and the tattoo artist must be the author.  So, if the design is not new, or if the tattoo artist did not originate the design, then there may not be any infringement concerns.  Second, the tattoo recipient can negotiate regarding who owns rights regarding the tattoo.  If the tattoo artist agrees that the tattoo is a work-for-hire product, then there may not be an infringement issue.  Additionally, the tattoo artist may agrees to license the tattoo design for reproduction. Third, at least some uses may fall under a fair use defense.  But, for companies planning to create reproductions of a potentially copyrightable tattoo, it may be better to ask for permission than to hope for forgiveness.

Katie Scholz is an Associate level Patent Attorney and Trademark practicing in the Twin Cities area. She is a registered member of the Minnesota State Bar and the United States Patent and [...see more]