Legislation Introduced in House to Repeal the PTAB and the AIA 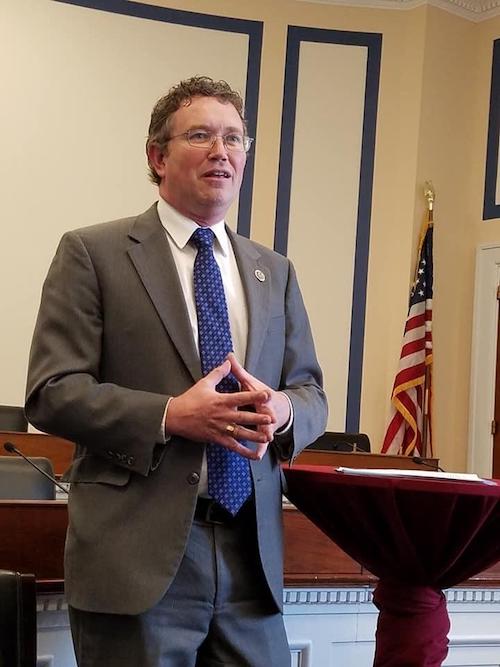 On June 28th, Congressman Thomas Massie (R-KY) introduced a bill into the House of Representatives known as the Restoring American Leadership in Innovation Act of 2018 (H.R. 6264). The bill, which is co-sponsored by Congresswoman Marcy Kaptur (D-OH) and Congressman Dana Rohrabacher (R-CA), would go a long way in rectifying the tremendous damage which has been wrecking the U.S. patent system in the years since the passage of the America Invents Act (AIA) of 2011.

There are 13 sections to Massie’s bill, many of which are geared towards the abolition of various statutes of the AIA. Perhaps the most salient portion of the proposed bill are sections regarding the abolishment of the Patent Trial and Appeal Board (PTAB) as well as the elimination of both inter partes review (IPR) and post-grant review (PGR) proceedings currently conducted by the PTAB. As the bill states, both IPR and PGR proceedings “have harmed the progress of science and the useful arts by subjecting inventors to serial challenges to patents.” The bill also recognizes that those proceedings have been invalidating patents at an unreasonably high rate and that patent rights should adjudicated in a judicial proceeding and not in the unfair adjudication proceedings which occur within the U.S. Patent and Trademark Office. Ex parte reexamination proceedings would be preserved by this bill as well.

The section of the bill that would abolish the PTAB would re-establish the Board of Patent Appeals and Interferences (BPAI), the agency which had existed within the USPTO prior to passage of the AIA. The BPAI would be directed to hear appeals from patent applicants as well as hold interference proceedings to determine priority and patentability of inventions which are claimed in U.S. patent applications. With the removal of IPR and PGR proceedings, the bill notes that the PTAB is no longer needed to conduct those proceedings. Outside of the context of ex parte reexamination proceedings, the BPAI wouldn’t be used to invalidate a patent which has issued.

Another aspect of the AIA that would be repealed through passage of the Restoring American Leadership in Innovation Act is the first-to-file provision, returning the U.S. patent system to a first-to-invent system. The bill would also restore the one-year grace period that an inventor had prior to the AIA, allowing the inventor a full year before being compelled to file a patent application to cover his or her invention. This grace period enables an inventor more time to attract investment, conduct research and development and perfect the invention to improve the quality of the patent application that is eventually filed. The bill would also roll back the AIA’s best mode requirement which required an inventor to describe the “preferred embodiment” of an invention, which only served to limit what an inventor could claim as his or her invention.

This bill would also clear up the legal morass surrounding the patentability of certain types of inventions which has been created in recent years by U.S. Supreme Court decisions in cases like Alice and Mayo. It would amend 35 U.S.C. § 101, the statute governing the basic threshold for the patentability of inventions, such that any new and useful process, machine, manufacture, or composition of matter is patentable with the exception of any invention that “exists in nature independently of and prior to any human activity, or exists solely in the human mind.” The emphasis on human activity is critical for the patentability of important medical advances which have been damaged by the Supreme Court’s Mayo decision in which a diagnostic method for measuring drug metabolites to adjust the dosage of a drug was declared patent-ineligible. The language about inventions that “exist[] solely in the human mind” is clearly a reaction to Alice, where the Supreme Court declared that a computer system for completing financial transactions with the use of a third-party intermediary was patent-ineligible. This amendment to Section 101 would go a long way to restoring patentability in the personalized medicine and software fields, both of which are going to be incredibly valuable market sectors in the years to come.

Further, Massie’s proposed bill would also undo SCOTUS’ 2017 decision in Impression Products v. Lexmark International, a case which restricted the rights of patent owners to sue for patent infringement. As the bill states, this decision has resulted in an inability of patent owners to exclude unlicensed customers from their supply chains. This particular statute is found in a section titled Restoring Patents as a Property Right and although Oil States isn’t directly referenced, this section would provide much needed relief to the court’s pronouncement of patents as public franchises. The bill would change U.S. patent code to say that “patents shall be recognized as private property rights” and further recognizes that patents are freely transferable as property through either assignment or licensing.

The bill, if passed, would also accomplish other goals for which supporters of the U.S. patent system have been asking for some time. Fee diversion at the USPTO would be eliminated by establishing a revolving fund for the agency at the U.S. Treasury. 35 U.S.C. § 102, which governs conditions of patentability based on novelty, would be amended so that information disclosed to the USPTO through patent applications aren’t considered prior art that could preclude the issuance of a patent. The automatic publishing of patent applications by the USPTO would be abolished, preventing the release of any information until a patent issues. The presumption of validity of a patent issued by the USPTO would also be restored and the bill would provide the presumption of validity for each individual claim of a patent independent of other claims, even if the claim is dependent upon another claim which has been declared invalid.

This bill, as written, is currently America’s best hope to restore sanity and prosperity to the U.S. patent system. It directly addresses issues with patentability of inventions and the patent opposition system which have been key weaknesses contributing to the demise of the nation’s system in international rankings and cited by the U.S. Chamber of Commerce in its recent 12th-place ranking for the United States’ patent system. No doubt this bill will be besieged by the usual cadre of well-financed Silicon Valley allies who worked so hard to get the AIA passed in the first place. Anyone who cares about the future of American innovation should get on the phone as soon as possible and call upon their Representative to support H.R. 6264 and stand up to the efficient infringer cabal which has turned the U.S. patent system into a shipwreck.