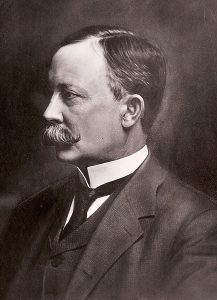 Warren Johnson. From the National Inventors Hall of Fame website.

Many residential and commercial buildings across the United States have heating and cooling systems which are controlled by thermostats, usually an electronic instrument which is designed to detect and regulate temperature within an enclosed space to maintain a desired setpoint temperature. As of July 2017, 41 percent of American homes had a programmable thermostat according to the U.S. Energy Information Association. Smart thermostats which offer automated functions for reducing energy consumption have been growing in popularity and 4.5 million homes in North America had a smart thermostat in 2015, a 78 percent increase from 2014. Global market research recently published by Markets and Markets indicates that worldwide revenues for heating, ventilation and air conditioning (HVAC) controls is expected to rise from $11.7 billion in 2017 up to $27 billion by 2023 thanks to rising demand for energy efficiency and building automation systems.

While thermostats are fairly ubiquitous as a modern convenience, this technology has its humble beginnings as the brainchild of a 19th century teacher who was trying to keep his classroom from constant disruptions by custodians. Warren Johnson one of the 2018 inductees into the National Inventors Hall of Fame for his invention of automatic room temperature control. This July marks the anniversary of two seminal patents in the field of temperature control for which Johnson received this honor. Today, we return to our Evolution of Technology series to shed some light on how one of the most important advances in modern HVAC technology was conceived and developed.

HVAC History From Ancient Rome Through the Mid-19th Century

While HVAC systems have seen their greatest period of development over the past 150 years, ancient cultures tried to regulate indoor temperatures to stay warm in various ways. In Ancient Rome, the hypocaust was capable of heating hot baths and other public buildings by burning fuel in an underground room and then circulating the warm air through a pipe system to keep upper rooms warm. Although stoves were used to heat rooms for many centuries after the Roman Empire, the introduction of modern heating systems into building construction largely dates back to the work of Russian artist and architect Nikolay Lvov who, in the late 1700s, devised a ventilation system for buildings to heat air coming in from the outdoors.

Systems for heat control date back to the early 1600s with the work of Dutch engineer Cornelius Drebbel, who developed a chicken incubator which used a mercury device to automatically control the temperature of the enclosed air. This is considered by many to be the world’s first thermostat as well as one of the world’s first feedback-controlled devices. In the 1830s, Scottish chemist Andrew Ure developed the first thermostat designed to regulate the temperature for an entire room in an attempt to regulate the indoor temperature of textile mills.

Born November 6th, 1847, in Leicester, Vermont, Warren Johnson moved with his family at a young age to Wisconsin and would later become a teacher at the State Normal School in Whitewater, now known as the University of Wisconsin-Whitewater. The classrooms were Johnson taught were heated by hot air furnaces operating in the basement of the building. School custodians controlled the heat through hand-operated dampers installed in the furnace system and custodians would enter each classroom about once every hour to assess the room temperature and adjust the dampers if necessary. These regular interruptions perturbed Johnson and he set about developing technologies for ensuring that classrooms maintained a constant temperature. 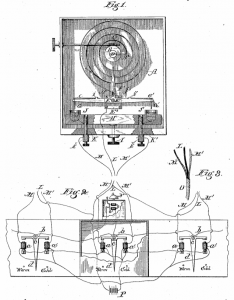 This July 24th marks the 135th anniversary of a patent issued to Johnson in 1883 covering his thermostat technology. U.S. Patent No. 281884, titled Electric Tele-Thermoscope, claimed the combination of a metallic thermometer provided with a pin at a free end and the other end of the thermometer being firmly fixed to the axis of a toothed wheel and adjustable by a screw; the thermometer’s pin is received into a vertical slot on an oscillating beam. The resulting invention provided a means for indicating the temperature in the room which quickly indicated to an observer whether a room was cold or warm. 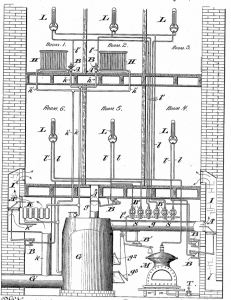 While Johnson’s first thermostat invention reduced custodian interruptions during his lessons, he continued to work at developing systems that would automate the work of controlling indoor temperatures. The first multi-zone automatic temperature control system feasible for commercial application was protected by U.S. Patent No. 542733, titled Heat Regulating Apparatus and issued on July 16th, 1895. It claimed a combination of primary, secondary and tertiary valves, fluid pressure motors for actuating the primary and secondary valves and a thermostatic motor for actuating the tertiary valves. The primary valve regulated the heat supply, the secondary valve controlled the fluid pressure in the primary valve and the tertiary valve controlled the fluid pressure in the secondary valve. The valve system worked to heat apartments from a common source while enabling the heat to be shut off to individual rooms when the temperature in the room reaches a desired limit.

Johnson left teaching behind in 1883 to concentrate on developing his thermostat and heating technologies. He established the Johnson Electric Service Company, later Johnson Controls, to commercialize his technology. His room temperature regulating system would come to be installed at the U.S. Capitol, the New York Stock Exchange, West Point and the home of Andrew Carnegie. Johnson would earn 50 U.S. patents during his lifetime and in 2008, the Johnson System of Temperature Regulation was named as an American Society of Mechanical Engineers (ASME) Historical Mechanical Engineering Landmark.