“My amendment will ensure that Hatch-Waxman continues to operate as originally intended by protecting the ability of generic drug companies to develop low-cost drugs while at the same time ensuring brand-name companies have sufficient protections in place to recoup their investments.” —Senator Orrin Hatch 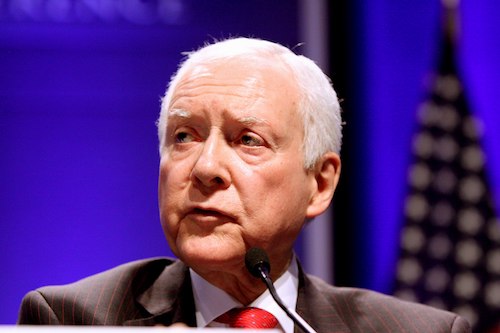 Late yesterday, Senator Orrin Hatch (R-UT), co-author of the Hatch-Waxman Act, filed an amendment in the Senate Judiciary Committee to address what many characterize as abusive inter partes review (IPR) filings relating to brand name pharmaceuticals. According to Senator Hatch, his amendment is intended to fix IPRs and restore the careful balance the Hatch-Waxman Act struck to incentivize generic drug development. The Hatch-Waxman Act encourages generic drug manufacturers to challenge patents of brand name drugs by filing Abbreviated New Drug Applications with the Food and Drug Administration, which can and typically does result in patent infringement litigation in federal district court.

“As the coauthor and namesake of Hatch-Waxman, I have a keen interest in ensuring we have a well-functioning generic drug industry,” said Senator Hatch in a press release published last night. “My amendment will ensure that Hatch-Waxman continues to operate as originally intended by protecting the ability of generic drug companies to develop low-cost drugs while at the same time ensuring brand-name companies have sufficient protections in place to recoup their investments.”

In recent years inter partes review (IPR) at the Patent Trial and Appeal Board (PTAB) of the United States Patent and Trademark Office (USPTO) has created an alternative path to challenge the patents of brand name drugs; a path alternative to the path envision in Hatch-Waxman. Those who support the Hatch-Waxman regime view IPRs as upending the careful Hatch-Waxman balance.

Senator Hatch’s amendment, the Hatch-Waxman Integrity Act of 2018, would require a generic manufacturer wishing to challenge a brand-name drug patent to choose between Hatch-Waxman litigation, which affords certain advantages such as being able to rely on the drug innovator’s safety and efficacy studies for FDA approval, and IPR, which is cheaper and faster than Hatch-Waxman litigation but does not provide the advantages of a streamlined generic approval process. Parties would not be able to use both. In this way the amendment aims to fix the misuse of IPRs by generics as parallel and duplicate proceedings to disputes already in place in Hatch-Waxman.

Politically, this Hatch pick a path amendment is going to be paired with S. 974, The CREATES Act of 2017 (H.R. 2212).  This legislation aims to enable the sharing of samples so that generics can compete more effectively.  You can learn more about the substance of the CREATES Act by reading Senator Leahy’s summary here. The Creating and Restoring Equal Access to Equivalent Samples (CREATES) Act enjoys broad, bipartisan support from Senators Leahy, Grassley, Feinstein, Graham, Durbin, Lee, Whitehouse, Cruz, Klobuchar, Kennedy, Blumenthal.  Generics want the CREATES Act, and there are 28 co-sponsors.  The bill was voted out of the Judiciary Committee favorably this morning but Hatch voted against it.

Raising and connecting the Hatch-Waxman IPR fix to the CREATES Act balances two major interests of both the brand and generic industries.  Brand needs this Hatch-Waxman IPR fix and generics want CREATES.  Like Hatch’s original objective with Hatch-Waxman, each side gains something resolving a major problem and neither loses anything that they had any reasonable expectation that they would, or should, be able to maintain.

Senator Hatch’s amendment would not have any affect on IPRs relating to the tech industry. This is politically significant because IPRs, created primarily in response to the fictional narrative of patent trolling, was intended to be a faster, cheaper way to challenge patent validity than traditional litigation. What has happened, however, is IPR has become another expensive litigation proceeding. Nevertheless, Senator Hatch and others see IPRs as being enormously beneficial to the tech community, but believe there should be certain carve outs that protects pharmaceutical patents from the killing fields of the PTAB. Presumably, only innovators that have the audacity to have patented inventions being infringed by big tech should be subjected to the whims and fancy of the PTAB.

While Senator Hatch says IPRs frustrate the purpose of Hatch-Waxman and make it more difficult for generic manufactures to take generics to market, that claim is simply false.

In truth, a successful IPR on a pharmaceutical patent would pave the way for generics to immediately enter the market, or as immediately as the FDA process will allow. In fact, a successful IPR would invalidate the patent claims that are being used by the brand name drug owner to prevent generic competition. Indeed, one would be hard pressed to define a process more likely to result in the quick entry of generics to the market.

Thus, the problem Senator Hatch is trying to solve is not the streamlining of generics to the marketplace, but rather it is to prevent generics from utilizing IPRs to kill the patent rights of brand name drugs and then rely on the innovator’s efficacy studies in order to quickly gain FDA approval. If there were an interest in truly allowing generics to get to the market faster IPRs would be expanded for pharmaceutical patents, not curtailed.