Iancu: People have a right to know what is patent eligible

“What is it that we want to exclude from patenting, people should know up front,” Iancu said forcefully. 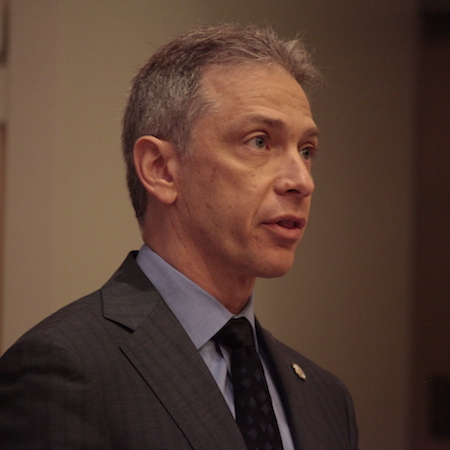 This morning Director Iancu spoke at the IAM sponsored IPBC Global meeting in San Francisco at the Palace Hotel. As has become common for Iancu speeches, his speech focused on the confusing nature of patent eligibility under the current test endorsed by the Supreme Court – the Alice-Mayoframework. During his speech Iancu asked “is it that we don’t understand 101, or is it that the law is just too complicated?” His speech would clearly answer that Director Iancu believes the law has become too complicated and decision makers are reading too much into Supreme Court decisions.

To prove his point, Director Iancu discussed whether the phonograph, invented by Thomas Edison, would be patent eligible today. When he reached the end and concluded that it probably would not be patent eligible today because it is an abstract idea that really added nothing significantly more, he explained that he was playing devil’s advocate. Still, his message was clear. Iancu referred to the current eligibility test as a “tortured exercise” that doesn’t allow examiners to even get to the question about whether the claimed invention is novel or nonobvious.

While the subject matter of the speech was similar, this speech by Director Iancu was different. It was much more direct and forceful than any of his previous speeches. Iancu asked how inventors are supposed to know where to focus energy and effort without knowing what is patent eligible. That is an excellent question. One that Congress and the Courts should take to heart and thoroughly consider. Very real damage has been done to the U.S. patent system as the result of unnecessary uncertainty and an overly restrictive view of what is patent eligible in the U.S.

Director Iancu would go through the list of things we collectively understand are not patent eligible, such as isolated DNA, gravity and the like.

“What is it that we want to exclude from patenting, people should know up front,” Iancu said forcefully.

“We must be careful to not overread the Supreme Court’s exclusions,” Iancu said before quoting the Supreme Court recognizing that their tests could if applied expansively swallow all of patent law. “Why not simplify,” Iancu asked.

During the question period with Richard Lloyd of IAM, the issue of legislatively reforming 101 came up. Director Iancu explained that if the courts and PTO closely followed the Supreme Court’s decisions and did not read too much into the decisions and exclusions, reform of 101 might not be necessary.

EDITORIAL NOTE: This article will be updated once the transcript of Director Iancu’s speech is made public by the USPTO later this morning.