The Cost of Registering a Trademark in Southeast Asia 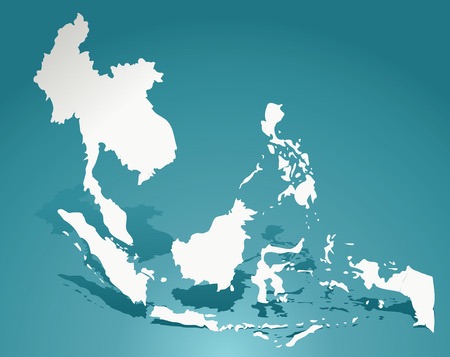 From celebrating its Golden Jubilee on August 8, 2017, to Indonesia becoming the 100th member of the Madrid System for trademarks, the last few months have witnessed the Association of Southeast Asian Nations (“ASEAN”) being in the news for all the right reasons. In this article, we turn the spotlight to the costs of brand protection (i.e. the costs of registering a trademark) in Southeast Asia.

ASEAN is a regional bloc that was founded in 1967 by five countries: Indonesia, Malaysia, the Philippines, Singapore, and Thailand. The organization’s membership has expanded to ten, with the subsequent induction of Brunei, Cambodia, Laos, Myanmar, and Vietnam.

Collectively, ASEAN is an economic dynamo. From a combined GDP of just $23.7 billion at the time of it’s founding to a combined GDP of $2.4 trillion in 2015, the organization’s growth story over the last five decades has been nothing short of sensational. Currently, the ASEAN Economic Community (AEC), which has English as its official language, is the sixth largest economy in the world and the third largest in Asia (Evan Garcia; 2017).

The growth of ASEAN has, in turn, made it an attractive destination for Foreign Direct Investment (“FDI”). In the year 2015, the FDI that came into ASEAN defied the global decline of 8% and stood at $120 billion, which translates to 16% of the total FDI received by developing economies (ASEAN Investment Report 2016). Further, several member countries have made significant advances in the World Bank’s 2018 Ease of Doing Business report. While Singapore is well-known as a business hub in Southeast Asia, in which many corporations have established their Asian Pacific headquarters, Indonesia, Thailand, and Vietnam have moved up by 14 to 20 positions in the latest rankings (Bangkok Post; 2017).

With so much FDI pouring in, it was inevitable that brand protection (i.e. protection of trademarks) would take centre stage. Between 2010 and 2015, ASEAN has witnessed an approximately 20% increase in the filing of trademark applications, with 168,992 applications being filed in 2015 (ASEAN IP Portal; accessed October 2017).

As per a study commissioned by the International Trademark Association, “trademark-intensive industries make a vital contribution to gross domestic product (GDP)” in Indonesia, Malaysia, the Philippines, Singapore and Thailand (Adam Houldsworth; 2017). In these five economies, the direct contribution of brand-intensive industries to the GDP lies between 17% in the Philippines to 50% in Singapore, with their indirect contributions lying being between 40% in Thailand to 60% in Malaysia.  Further, such industries are valuable employment generators and account for between 13% – 29% of the total employment.

Typically, there are three categories of costs involved in filing trademark applications in ASEAN and, subsequently, getting them registered; these are official fees, attorney charges, and translation costs.

As is the case with the other types of trademark costs, the costs are generally dependent on the number of classes of goods and services under which the trademark applications are filed. The ‘International Classification of Goods and Services’ contains 34 classes for goods and 11 classes for services.

Let us consider a trademark application for a logo/device that is to be filed electronically by a large entity under two classes in Indonesia, Malaysia, Singapore, and Thailand. For instance, the two classes could be Class 10 (Medical Apparatus and Instruments) and Class 44 (Medical Services). Further, we shall consider that three items of goods and services are to be specified under each class.

For the above-mentioned scenario, the total estimated costs range from $1,389 in Malaysia to $1,848 in Indonesia (Figure 1). 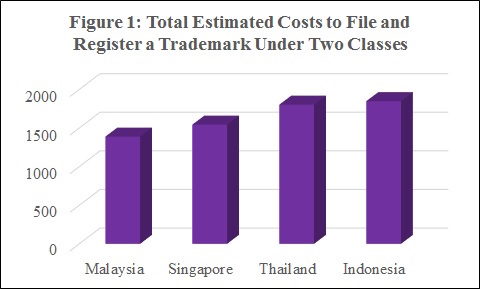 The costs are inclusive of translating one page into the official language in Indonesia, in addition to Value Added Tax. The Value Added Tax is applicable to the attorney charges and translation costs, and ranges from 6% in Malaysia to 10% in Indonesia.

The estimated costs are based on the values found within the fee schedules supplied by at least five independent Intellectual Property law associates in each jurisdiction, and are for the basic processing of straight-forward applications (i.e. they do not include charges for responses to office actions, arguments, and other similar work). 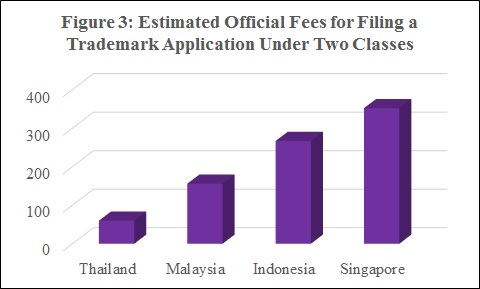 The costs are inclusive of the attorney charges for filing in an additional class in Malaysia, in addition to the official fees and the attorney charges for filing proof of use in Thailand. For Singapore, the costs are based on the items of goods and services being fully adopted from the pre-approved database of the Intellectual Property Office of Singapore. 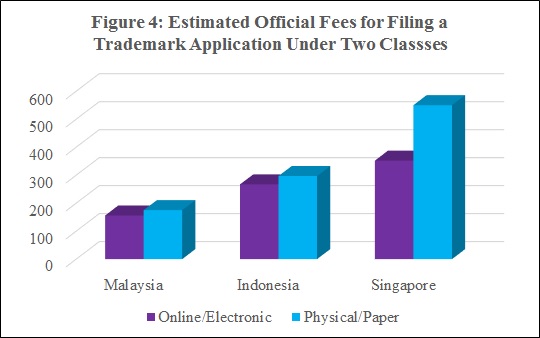 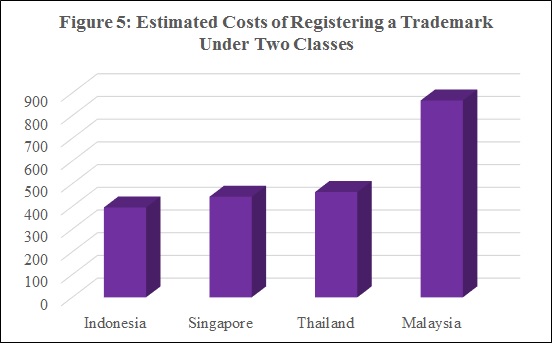 Thus, based on the above-mentioned filing parameters, it would cost an applicant approximately $6,584 to file trademark applications in Indonesia, Malaysia, Singapore, and Thailand, and, subsequently, get them registered.

The ASEAN Economic Community, with its immense untapped potential, promises to be a lucrative market for brands and organizations that are willing to invest in Southeast Asia. However, developing a brand protection strategy that includes one or more of the ASEAN economies could be extremely challenging due to the presence of a bundle of varying national legislations, each mandating its own set of procedures. Though the setting up of a common trademark system and trademark office, as provided for in the ASEAN Framework Agreement on Intellectual Property Cooperation, could simplify procedures to a great extent, having a precise idea of the costs that could be incurred will facilitate strategic decision-making and budget forecasting.

Anthony de Andrade Anthony de Andrade is president and chief executive of Quantify IP, a company he founded in 1984. De Andrade has conducted extensive research on the development of customized software for [...see more]

Venkatesh Viswanath is an Indian patent agent. He is in charge of content generation at Quantify IP.