No Actual Controversy for Foreign Manufacturer for DJ, Even if Product is Manufactured in US

Suit of a foreign manufacturer in foreign country on a foreign patent does not qualify as an actual controversy for Declaratory Judgment purposes even if the product is manufactured in the US. 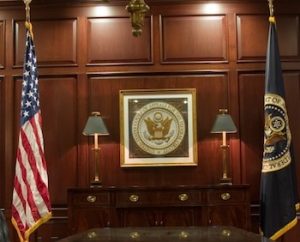 Stellar and Allied are American companies. However, the dispute arose from a Mexican patent infringement suit between Stellar and two of Allied’s Mexican distributors. Allied manufactures the products accused of infringement in the United States, which are then sold in Mexico by Allied’s Mexican’s distributors. Allied sells the same product in the United States under a different name.

Allied filed a declaratory judgment action of non-infringement of the corresponding US patent-in-suit against Stellar. Stellar moved to dismiss for lack of subject matter jurisdiction, and the district court granted the motion. Allied appeals.

Our decisions have required that the dispute be definite and concrete, touching the legal relations of parties having adverse legal interests; and that it be real and substantial and admit of specific relief through a decree of a conclusive character, as distinguished from an opinion advising what the law would be upon a hypothetical state of facts.… Basically, the question in each case is whether the facts alleged, under all the circumstances, show that there is a substantial controversy, between parties having adverse legal interests, of sufficient immediacy and reality to warrant the issuance of a declaratory judgment.

Here, the Federal Circuit held that the totality of the circumstances did not rise to the level of actual controversy. Stellar took no action to support a declaratory judgment by Allied. Stellar never directly communicated with Allied, never previously litigated, or threatened litigation in the United States, or on the U.S. patent. The Court held that the existence of a parallel foreign suit in Mexico was an insufficient basis for subject matter jurisdiction. There was no controversy because Allied was not obligated to indemnify its distributors, which might not have established jurisdiction anyway. Further, the Mexican suit did not implicitly accuse Allied of infringing of the corresponding US patent, based on the alleged infringement of the Mexican patent by distributors in Mexico. The Federal Circuit affirmed the district court’s dismissal of the case for lack of jurisdiction.

For a patent dispute to be an actual controversy, the courts look at affirmative actions taken by the patentee, communication between the parties, the relevant litigation history, and the relationship between any foreign suits and the US parties and patents. Assertion of a foreign patent against foreign distributors does not per se create an actual controversy, for declaratory judgment, regarding infringement of a corresponding US patent by a US manufacturer.