Trademark a Band Name: What’s in a Rock Band’s Name? 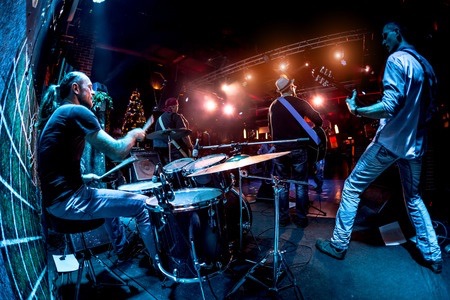 Trademark law may not be very “Rock and Roll”, but it sure is important these days. When it comes to rock and roll bands, trademarking the band name is an essential part of legal protection.

Today, a common misunderstanding is the idea that one can actually “copyright” a band name. While it is possible to copyright the design of a band logo, the band name itself is not copyrightable. Band names are protectable under trademark law, because like brand names they allow us to distinguish one band’s music and identity from another. They are what enable us to distinguish between a “Beatles” record on the one hand, and a “Chipmunks” record on the other.

A trademark is a word, symbol or device that distinguishes one set of goods from another. Meanwhile, band names are considered “service marks” because they help distinguish between providers of entertainment services. If they are used in interstate commerce, trademarks and service marks can be registered with the U.S. Office of Patents and Trademarks. Besides obtaining registration of a service mark, a band may also register its name as a trademark if it is associated with specific merchandise, such as record albums.

Craig Newby, partner at McDonald Carano Wilson LLC in Nevada, recently sat down with IPWatchdog to discuss the importance of trademarking a rock band’s name. Newby is a skilled litigator and business counselor with particular experience in handling the requirements of complex commercial litigation, including cost-effective discovery and fact investigation, strategic motion practice, settlement from strength, and trial.

“Similar to anyone wanting to establish a mark, a rock band needs to protect its name as soon as it is actually used,” he explained. “All else equal, a band should seek a name that is inherently distinctive, such that it qualifies for a high degree of trademark protection.”

The more unique the name, the greater the degree of trademark protection, but also the more the name will stand out and set the band apart from others, which is generally the goal. “Typically you don’t want to pick a name that is difficult to remember, pronounce or spell, but you want something that is easily memorable,” says Gene Quinn, founder of IPWatchdog.com and a one-time independent record label executive. “Bands really must also give thought to whether they will be able to obtain reasonable social media usernames and a website that meshes with the band name they want to trademark.” See Selecting a Business Name in a Social Media Crazy World.

An exaggerated example of an artist choosing an inherently distinctive name was Prince when he changed his name to the “Love Symbol” and immediately obtained four federal trademark registrations. Inherently distinctive marks are easier for a band to enforce against efforts by others to infringe against or dilute the mark. See Selecting the Right Name for Your Business.

What are best practices that bands can follow to protect themselves from trademark infringement of their names? Today’s rock bands need to be the first to use the mark in commerce or the first to register the mark with the U.S. Patent and Trademark Office, according to Newby.

“Registering the mark would be best practice to maximize the ability to use it nationwide, except where others are already using it in a specific geographic area,” Newby explained. “As part of that process, the rock band must decide who owns the mark (whether it be individual members or a corporate entity they form for the band).”

Deciding who owns the trademark up front can also save the band from numerous headaches down the road. Case in point — Jefferson Starship and Jefferson Airplane.

The band name Jefferson Starship, goes back more than 40 years, has had more than 30 members and was born from the Jefferson Airplane. Craig Chaquico, a founding member of the band and the only musician to perform on all 10 of their albums, on August 11th secured from U.S. Magistrate Judge Maria-Elena James in San Francisco a decision green-lighting a cause of action of what his lawyers said was the core claim over use of the legendary band name. The ruling came in a lawsuit initiated by Chaquico in April for breach of contract and unfair business practices, and seeking an injunction to stop the band from using the Jefferson Starship name and his likeness.

According to Newby, Jefferson Starship marked a distinctive break from the original Jefferson Airplane, which had defined the psychedelic “San Francisco Sound” in the 1960s with songs like “Somebody to Love.”. Eventually, the band drifted towards pop music, such as We Built This City and, following litigation, renamed itself Starship.

So, what is the significance of the lawsuit over use of the legendary band name Jefferson Starship?

Recently, the federal court granted in part and denied in part the current band members’ motion to dismiss, per Newby. Chaquico needs to decide whether he wishes to refile his federal trademark claim with the required facts and, ultimately, the parties will proceed with discovery and trial, which has not yet been scheduled.

In addition, the rock band needs to make sure it does not abandon or otherwise lost its mark. And lastly, the band needs to make certain it enforces its mark against those who seek to infringe against it or dilute it, to ensure no one is as confused as Chaquico believes Jefferson Airplane fans might be about the current touring version that seeks to use the name.