From underwater storage to drones, what is Amazon’s patent strategy?

The futuristic concepts of one of the largest and constantly growing US online retailer have been intensively discussed online during the last few months. No matter if the new inventions build the future of the retail, or whether they remain unrealized, it’s fascinating to analyze the intellectual property strategy of Amazon. This article examines some of the latest Amazon patents and the technology field they are in from a patent quality and patent value point of view.

At first sight Amazon’s patent portfolio is indeed remarkable, with respect to its total value as well as its development over time: the total value of the company’s patent portfolio shows a strong over-proportional growth within the past six years. Starting 2010 with about 550 patent families and € 130m, the patents have reached a total value in September 2016 an impressive total sum of € 1,15b with 4,162 alive patent families. For a company being recognized as a retailer this is indeed remarkable and shows the trend of being more and more a high tech company. This can be seen within their strong increase of total patent portfolio value but also the technical analysis. 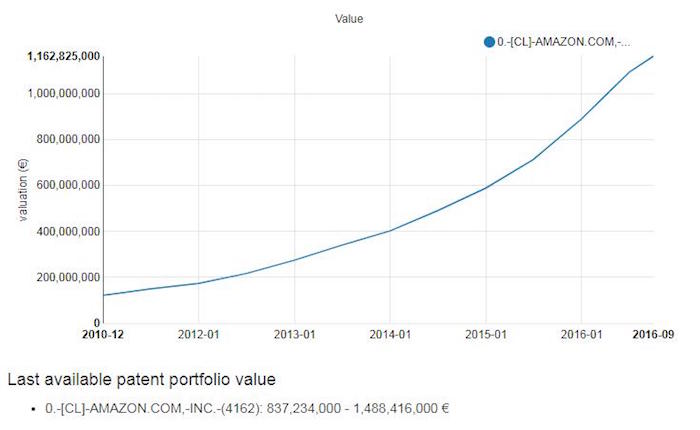 As seen in the graph below, the most recent IPC classes with the highest patent values are filed in the two IPC sections: G (about 83%) and H (15%). Within these the biggest three patent categories G06F (Electric digital data processing), G06Q (Data processing systems or methods, specially adapted for administrative, commercial, financial […] purposes…) and H04L (Transmission of digital information). Compared to the year 2010 (left graph) the technical fields are way more focused. There are 3 fields dominating 90% of the portfolio value: G06F, G06Q and H04W (Wireless communication networks). The strategy: diversification. 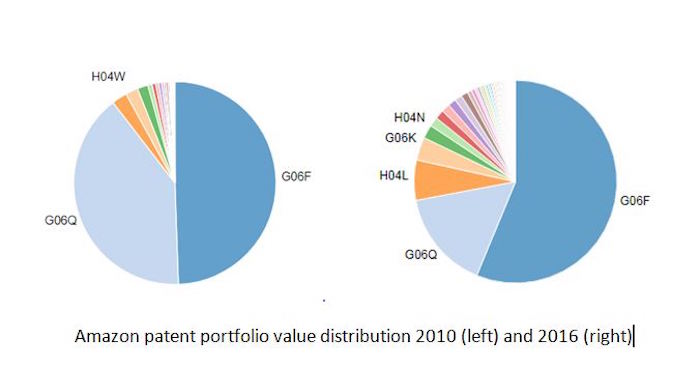 One of the inventions mentioned in the title of this article is published as Aquatic storage facilities (US9624034) and describes the underwater storage concept. The invention enables the moving of the items in “liquid-filled environments” by density manipulation: every item is placed into a container having a depth control device. This makes it possible to manage the vertical position of the container.

This patent is filed in two IPC classes: G06F (Electrical digital data processing) and B65G (Transport or storage devices). In the following graph, the class for this invention B65G 1 will be analyzed with respect to this patent. On the first sight the IPC class B65G 1 (Storing; Storage devices; Storing articles) seems to be “exotic” for Amazon, being in an IPC class that covers less than 1% of the total patent portfolio value. But this class shows an interesting development – during the last years it seems to be of rising attractiveness not only for Amazon: the total amount of patents as well as the value (corresponding to the quality) are rising almost constantly. Finally, a number one online distributor may sooner or later require new storage concepts.

As illustrated by the following graph, the period between December 2010 and September 2016 shows a significant growth in the worldwide patent value of the section B65G 1. Started by approx. € 150m it reached a peak in 2016 of almost € 450m, the sizes tripled. The amazing thing is that the amount of patent families have decreased in the same period from 2095 patents in this class (2010) down to 1692 in 2016. This means that the average value of patents here is growing significantly. 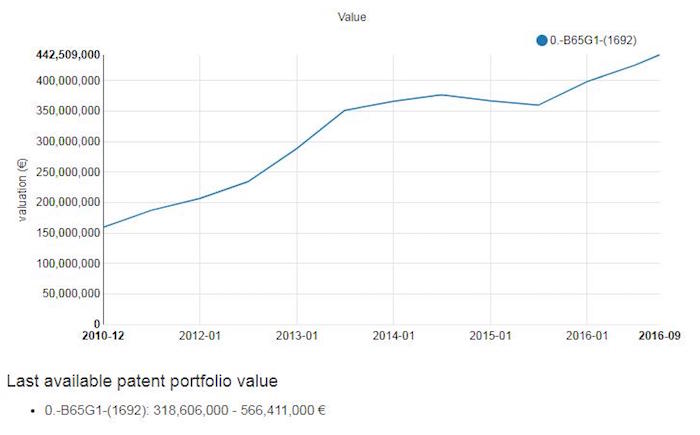 The Amazon-patent for drone centers Multi-level fulfillment center for unmanned aerial vehicles is registered in the B64 category. This patent describes a new way of delivering packages using an urban drone center in cities. Amazon´s idea is to create a multi-level building, where the drones can land and pick up the ordered items, to offer new ways of delivering for the growing needs of the large urban population.

It’s interesting to observe the worldwide IP value trend in the class this patent is filed in. As seeable in the following graph, the class B64F 1 is growing worldwide – even though it is a very small class due to its very limited technical focus. The total amount of patents almost doubled within the past 6 years, in the end of 2016 there were in total 281 alive patent families in this class. 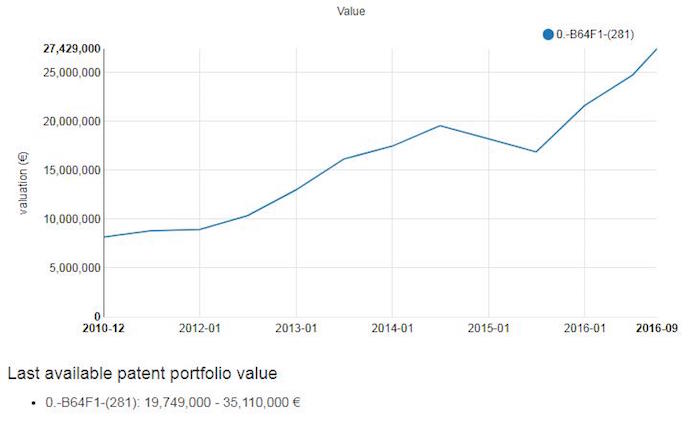 For Amazon this is an absolutely new intellectual property field. Assuming with this invention Amazon may determine a new technology field of the company, were future development may be expected.

Also one of the last most curious Amazon´s patents Trigger agents in video streams from drones was filed in the new for Amazon B64 class (B64C 39/02). This patent protects the process of sampling and analyzing video data by drone delivering. According to the patent description the main idea behind these processes is to provide service recommendations (for example roof repair service) according to the identified customer needs.

The general value trend in the B64C 39 is very dynamic and positive. From 2010 to 2016 the worldwide patent value of this class has increased from 4m to about 16m Euro, within the one recent year the increase is more than 100%, even though the class itself is comparably small and very specific – in 2016-09 it contained only 382 valid patent families. However, again Amazon hits a technology area with rising attraction. 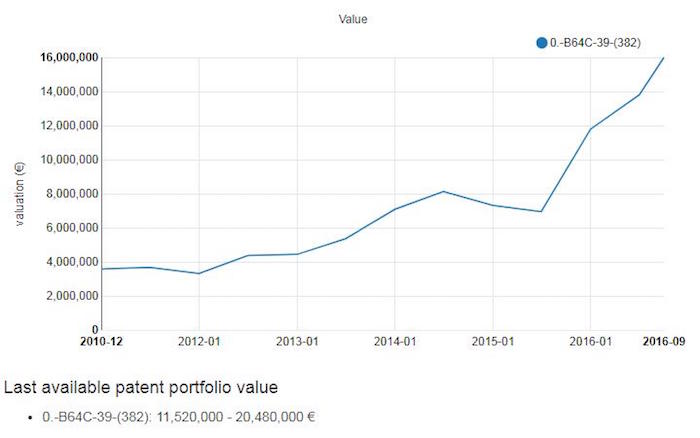 Let us compare the worldwide development with Amazon’s intern situation. Having a look into this specific class (B64C 39) in the Amazon Portfolio, then it is seeable that is indeed a very new field. There are just 3 families recently filed in this class with a so far moderate value: 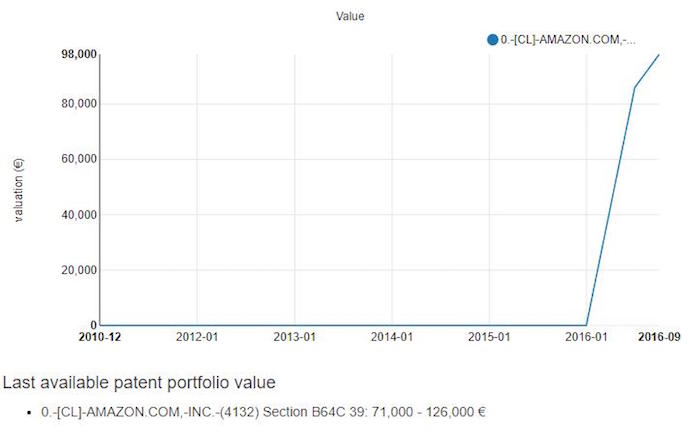 Nevertheless this technical area is covered with other patents in similar classes, so having a look into B64C in general it is seeable that the above patent is not a single side invention but definitely an exotic one (the graph looks similar but it is different): 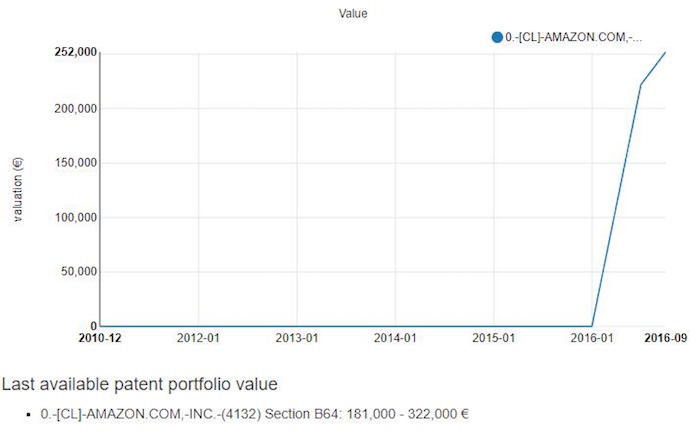 In contrast to the previous “exotic” patents, the invention Physical store online shopping control – often controversially discussed in the public, is filed in the second largest class of the company G06Q 30 (Commerce, e.g. shopping or e-commerce). In contrast to the former mentioned classes this has a comparable big size with 23,453 alive patent families. 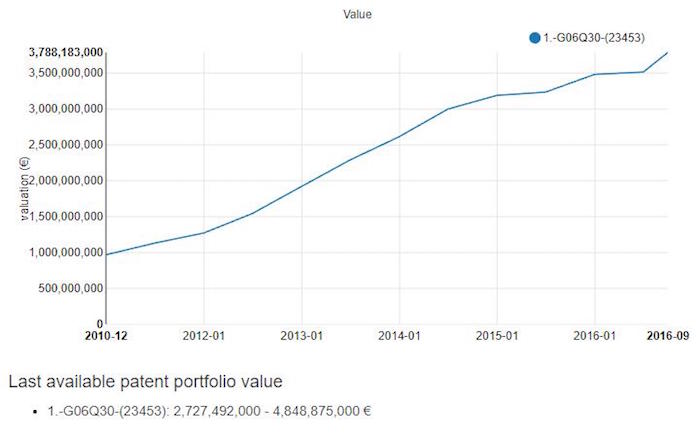 The main idea of this invention is to block online price comparison by customers, who are located inside an offline store and are using the wireless network provided by the retailer.  While the previous inventions were filed in some peripheral and relatively new IPC classes, this patent belongs to G -the most valuable IPC category of Amazon. In contrast to the former described inventions that intend to drive (technical) innovation, this invention seems to focus on a certain customer behavior. Their new invention now tries to block a behavior that Amazon itself made big in the past: the attempt to offer the best prices inside their online-store. The invention shows that they are now facing the same problem offering products in retail stores.

While patent filing in B64F 1 category started from 2015, G06Q 30 class is developing during the longer period of time. Nevertheless you can see from the graph there is a similar trend for the both classes – in the year 2016 the patent value is rising rapidly. 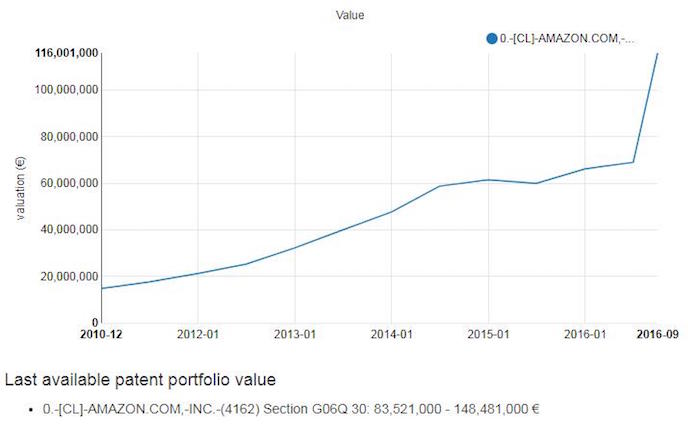 The analysis shows, the mentioned patents are worse discussing – not only because of their futuristic nature, but in the first line because these patents indicate the Amazon´s intellectual property strategy. There is no doubt about the fact, the development of Amazon´s patent value is very positive. Moreover all four patents, analyzed in this article, are filed in the growing categories. The strongly increasing value trend of the mentioned categories offers a good prerequisite for these patents, to influence the future of the retail business.

Dr. Dierk-Oliver Kiehne studied Medical and Mechanical Engineering at the RWTH Aachen. He started his career at Dornier Medical Devices then moved to the Fraunhofer Group in Stuttgart, Europe’s biggest organization for applied [...see more]