The Costs of Patenting in Africa: A Tale of Three Intellectual Property Systems 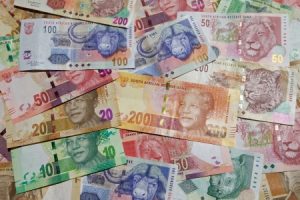 The African economy, which is home to more than a billion people, has tripled since the year 2000 (Michael Lalor; 2014) and currently houses 9 of the 15 fastest growing economies in the world (Spoor & Fisher; 2016), presenting immense business opportunities. In this article, we shall take a look at the patenting systems in Africa, which are a complicated mix of National and Regional systems, and the costs involved.

There are two Regional Patent Offices in Africa, which account for approximately 65% of the countries that make up the continent, with most of the other countries having their own national patent legislations.

ARIPO, established in 1976 under the framework of the Lusaka Agreement, is comprised of 19 member states: Botswana, The Gambia, Ghana, Kenya, Lesotho, Liberia, Malawi, Mozambique, Namibia, Rwanda, São Tomé & Príncipe, Sierra Leone, Somalia, Sudan, Swaziland, Tanzania, Uganda, Zambia, and Zimbabwe (ARIPO Annual Report; 2016). Membership to ARIPO, which was originally restricted to only English-speaking African countries, has subsequently opened up to other countries as well, with the organization currently having three such members: Mozambique (Portuguese), São Tomé & Príncipe (Portuguese), and Somalia (Somali and Arabic). Over the last 40 years, ARIPO has played a significant role in shaping the Intellectual Property landscape in Africa.

A confusing, yet interesting aspect of ARIPO is the fact that it is empowered by separate protocols to grant each type of Intellectual Property, with not all the protocols being in force in all the member states. Thus, while the Harare Protocol on Patents and Designs is in force in all the member states, except Somalia, the Banjul Protocol on Marks is in force in only 10 member states. The Arusha Protocol for the Protection of New Varieties of Plants, adopted in July 2015, will “enter into force 12 months after four States have deposited their instruments of ratification or accession” (ARIPO Annual Report; 2016).

OAPI, which also goes by the English name of ‘African Intellectual Property Organization’, is ARIPO’s sister organization that was established a year later (in 1977) under the framework of the Bangui Agreement. Its missions include: protection of industrial property rights; dissemination of technical information; protection of literary and artistic property rights; promoting the economic development of member states; and providing Intellectual Property training (Hamidou Kone; 2012).

The Differences Between ARIPO and OAPI

Second, ARIPO is a designation-based system; the designation of member states, which is required at the time of filing, has an influence on the total fee that is to be paid. With an OAPI application, no such designations are required.

Last, but not least, while ARIPO conducts substantive examination (deferred system of examination), OAPI does not carry out such examination.

Apart from the OAPI member states, most African countries have national patent systems in place. National registration is the only method possible in South Africa, the top patent office in Africa, which is neither a member of ARIPO nor a member of OAPI.

The Costs of Patenting in Africa

Let us now study the costs involved in obtaining and maintaining a PCT National Phase patent through to expiry with ARIPO (AP), OAPI (OA), and South Africa (ZA). We shall assume that three countries have been designated in the ARIPO patent application. 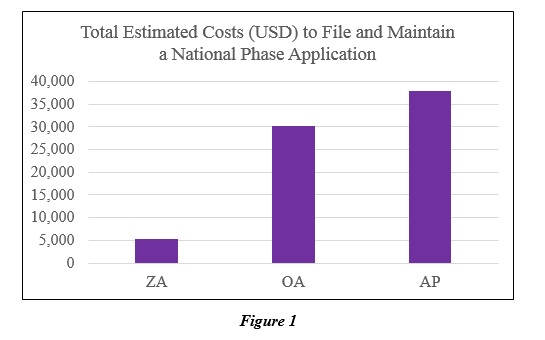 The total estimated costs (including attorney charges) that might be incurred by a company over the lifecycle of a 30-page patent (including five pages of drawings) with 16 claims, amount to $5,216 in South Africa, $30,132 in OAPI, and $37,842 in ARIPO (Figure 1). These estimates are based on the values found within the fee schedules supplied by at least five independent Intellectual Property law associates in each jurisdiction and are inclusive of Value Added Tax (added to the attorney charges) in OAPI.

The estimated filing cost in ARIPO is inclusive of a 20% discount on the filing fee for ‘Going Green’ (i.e. electronic filing). OAPI and South Africa do not offer similar Go Green incentives.

While the fees for excess pages (each set of 10 pages beyond 10 pages) and excess claims (beyond 10 claims) in OAPI are to be paid at the time of filing, the same in ARIPO (beyond 10 claims and 30 pages) are payable at the time of grant. These fees in OAPI (including attorney charges) can be quite high and account for approximately a third of the total estimated filing costs for the above-mentioned filing parameters.

As Africa develops by leaps and bounds and becomes an increasingly favored investment destination, its Intellectual Property systems are expected to come under the spotlight.  However, the lack of a single regional patent office makes the process of obtaining patents in Africa an extremely challenging one as applicants have to navigate their way through a bundle of regional and national legislations, each mandating its own set of procedures. Having a precise idea of the stage-wise costs that could be incurred will go a long way in facilitating the development of a patent filing strategy for Africa.

Anthony de Andrade Anthony de Andrade is president and chief executive of Quantify IP, a company he founded in 1984. De Andrade has conducted extensive research on the development of customized software for [...see more]

Venkatesh Viswanath is an Indian patent agent. He is in charge of content generation at Quantify IP.