The Most Notable, and Sometimes Creepy, Restaurant Mascots, Characters and Personalities

Quite some time ago, I wrote an article on the All-Time Best Corporate Character Mascots.   The article focused on Mascots that had been around for quite some time, some as long as the early 1900’s.  However, as commercials have gotten more creative over the years — think Super Bowl — so have many Corporate Mascots.  And as a result of the visibility TV and the Internet now offers, Corporate Mascots have become more well known that ever.

It used to be that Mascots were found typically to represent only household products or sports teams.  But over the years, more and more companies have begun using Mascots (Characters and Personalities), some of which are real people, in addition to logos and company names to identify their brands. And given that there are so many different kinds of companies using Mascots, Characters, and Personalities, I’ve decided it would be fun to do a series on Brand Mascots that have become very popular and well known over the years starting with some of the best and ending with some of the creepiest (in my opinion) restaurant Mascots. 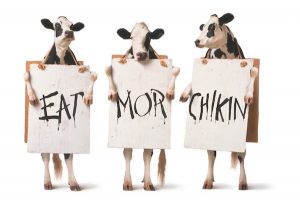 One of my favorite Brand Mascots, not to mention highly clever campaigns of all time, is that of the Chick-fil-A Eat Mor Chikin®” Holstein Cows.  Unlike many other Mascots, Chick-fil-A commercials feature actual living, breathing cows, walking around, with funny signs that say, well, “Eat Mor Chikin.®” They are also often seen staring people down who are eating burgers or carrying bags from generic burger joints.

It’s hard to believe that the “Eat Mor Chikin®” cows have been around for more than 20 years now.  Originally featured in their first advertising campaigns atop a billboard in 1995, it wasn’t until two years later that they appeared in their first television commercial. Some of my favorites are: 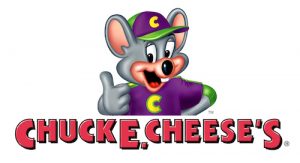 Chuck E. Cheese is a favorite restaurant of my favorite 6-year-old in the world.  Although this is not one that I would have thought of to add to this list, a reader of our blog, Tom M. Of Oregon, suggested I

…missed a really big one.  Chuck E Cheese has been the spokesman for the Chuck E. Cheese’s Pizza chain for 40 years next year. Among young children, he is the second best known corporate spokesman after Santa and before Scooby Doo, and light years away from the Toys “R” Us giraffe.

Chuck E Cheese, which is short for Charles Entertainment Cheese, was born on February 5, 1943.  Chuck E. along with other characters are featured as Animatronics that play in a band at each Chuck E Cheese Restaurant location.  However, it is only Chuck E., himself, who is featured in ads and commercials for the restaurant chain. 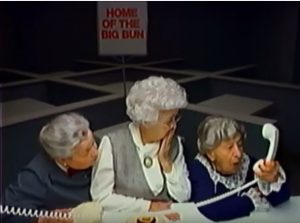 Wendy’s Where’s the Beef? Lady, Clara Peller (far right), was first seen as part of this advertising campaign in 1984.  The original commercial featured three elderly women at the “Home of the Big Bun.”  Together they examine the exceptionally large hamburger bun, during which two of the ladies poke at the bun and state, “It certainly is a big bun. It’s a very big bun. It’s a big fluffy bun. It’s a very big fluffy bun.”  One of the ladies then lifts the top of the Massive hamburger bun to reveal a teeny, tiny hamburger patty, cheese, and a pickle.  This prompts Clara to want to know, “Where’s the Beef?”  Although this campaign lasted only one year, Clara Peller and her catchphrase, “Where’s the Beef?” became one of the most iconic Brand Personalities and memorable catchphrases of all time. 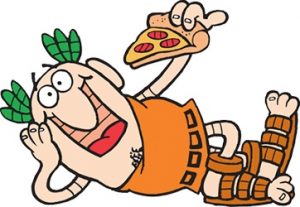 Prior to 1979, the Little Caesar’s character didn’t speak.  However, once the company launched its get two pizzas for the price of one campaign, Little Caesar became famous for their well-known phrase, and a registered trademark, PIZZA!PIZZA!® 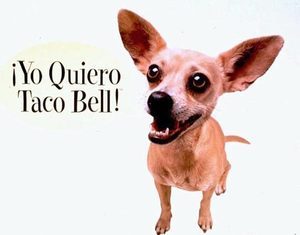 Gidget the Chihuahua was born February 7, 1994, and died on July 21, 2009.  Nicknamed the Taco Bell Chihuahua, Gidget was cast for the first time as the Taco Bell Mascot in September of 1997 across the Northeastern United States.  Although Gidget was actually a female, the Taco Bell Chihuahua was voiced by a male.  Made to speak through special effects, her advertising catchphrases were most notably “¡Yo Quiero Taco Bell!”, as well as “Drop the Chalupa”, and “Viva Gorditas!”  After seeing the largest decline in sales in Taco Bell history (Sales fell by 6% in the 2nd quarter of 2000 alone), Taco Bell decided to discontinue the Chihuahua advertisement campaign.  Yet, I can say for certain, that I still often say the catchphrase when people mention Taco Bell.

Although the Mascot became quite popular and toy figures of the dog were created, after seeing the largest decline in sales in Taco Bell history (Sales fell by 6% in the 2nd quarter of 2000 alone), Taco Bell decided to discontinue the Chihuahua advertisement campaign.  I don’t know about you, but I, for one, will still say the catchphrase on occasion at the mention of Taco Bell. 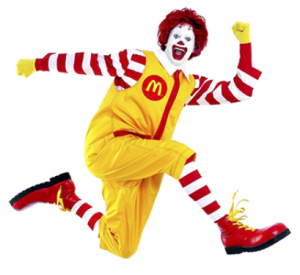 Although there are disputes over the true origin of Ronald McDonald, the most reliable source states that Willard Scott, who in his television personality role of Bozo the Clown (1959 – 1962), performed several skits using the name of Ronald McDonald, the Hamburger-Happy Clown.  Known as the Company’s “Chief Happiness Officer” the character has changed over the years.

Known as the Company’s “Chief Happiness Officer” the character, has evolved over the years.  And thankfully so.  The original Ronald McDonald, looking nothing like the character of today, was something I think most kids today would be afraid of. 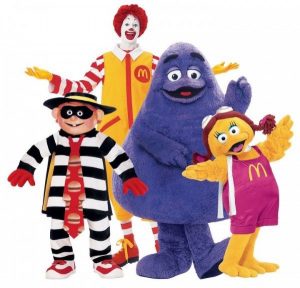 Although these characters all retired between 2010 and 2011, they bring back many memories from childhood, so I thought they deserved a nod!  The Hamburglar was introduced to McDonaldland in 1971.  This pint-sized “villain” had one objective, and that was to steal Hamburgers!  Grimace, a large purple character was also introduced in 1971.  Originally a villain himself, Grimace was known for trying to steal milkshakes.  Featured in his own VHS movies, “The Legend of Grimace Land”  and “Grimace Odyssey.”  In these movies, we were introduced to many of Grimace’s other family members.  And finally, Birdie the Early Bird, the first female character to represent the brand was brought on in 1980 to promote the company’s new breakfast items on the menu.

Down Right Creepy, If you Ask Me

There are far more Brand Mascots, Characters, and Personalities in the realm of restaurant advertising, than any other area, in my opinion, that are odd, weird, scary and just downright creepy.  As a marketing professional, I often shudder when I see these commercials and wonder, WHAT were they thinking?  How can anyone, calling themselves an advertising professional, think that these Mascots, Characters, and Personalities were, are or could be good ideas?

Here they are in order of bad to worst! 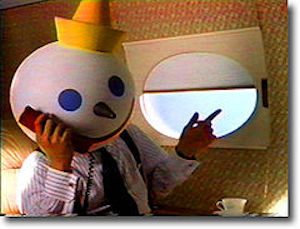 Jack-In-The-Box’s Mascot, known as Jack I. Box, Jack Box, or just Jack, made his first appearance as the company’s founder, CEO and ad spokesman in 1994.  According to Wikipedia, he has the appearance of a typical male, with the exception of his huge spherical white head, blue dot eyes, conical black pointed nose, and a curvilinear red smile. He is most of the time seen wearing his yellow clown cap, and a business suit while driving a red Viper convertible.

Like Grimace, Jack’s story line goes on to include members of his family including his mom Patty, his father, his wife Cricket and their children Jack Jr. Jane and Jake.  In fact, the story of his father, based on a commercial that aired in 2010, just makes this clown-like character all the more creepier.  In this commercial, Jack visits with his mother Patty, during which his dad comes into the room and says, “Patty, Call the Doctor.  (looks down) It’s been more than 4 hours” implying that he’s suffering from erectile dysfunction and suffering a side effect of ED medications.  Now you tell me, what does this have to do with selling Burgers.

Anyway, although Jack Box is far less Creepy than the two Mascots to follow, there’s just something weird about a man in a suit, with a “ping pong ball for a head” and a dad with an erection lasting “more than 4 hours.” 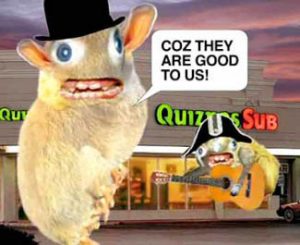 First of all, why would any restaurant ever want to feature a deformed Rat or Hamster like creature, as their Mascot?  The Quizno’s Spongemonkeys, which don’t even remotely resemble monkeys, are not even a little cute.  They look like horribly deformed rates, with pulsating eyes, not to mention the most annoying, screechy voice.  Why would anyone want their customers to associate rats, with their restaurants?  Rats and Restaurants are not a good idea.   It makes you think “dirty and not at all sanitary”.  And when it comes to food, the thought of rats, let alone horribly disfigured rats, would most certainly be a warning to Stay Away

I’ve looked to see what others have said about these “Mascots” and here are some of my favorites: 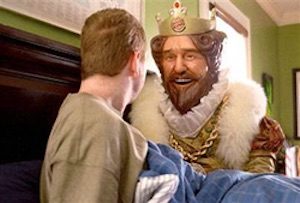 And in the #1 spot, not just in my opinion, but in the opinion of most is the Burger King’s “King.”  (Just do a Google Search on Creepiest Restaurant Mascots, and in almost every list you find, the King takes the cake).  The King, often dubbed the Creepy King, was created by a Miami-based advertising firm, in 2003.  Originally a caricatured creation, the King took on his new look in 2004, when according to Wikipedia, “An employee at Crispin Porter + Bogusky found a 1970s’-era, oversized King head for sale on eBay; originally used as an inspiration for brainstorming, it was eventually decided to restore the head and use it in a campaign.”

So here you have this King, with a big, plastic head, a wicked smile, who doesn’t speak, doesn’t blink, and just stares at you.  Earlier versions of the ad campaign had the King basically stalking people and startling them in Burger King restaurants, outside people’s windows, at the office, in a dark alley at night at an ATM, and of all places in someone’s bed when they woke up.  A stalker at best, the King takes home the prize (in my humble opinion) as the creepiest fast food mascot to ever live!