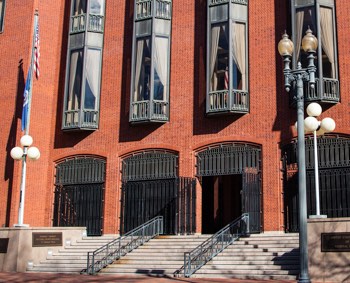 RecogniCorp, LLC v. Nintendo Co.,  (Fed. Cir. Apr. 28, 2017) (Before Lourie, Reyna, and Stoll, J.) (Opinion for the court, Reyna, J.) The Federal Circuit affirmed the district court’s decision that RecogniCorp’s patent claims are directed to an abstract idea, and do not contain an inventive concept sufficient to make them patent-eligible under 35 U.S.C. § 101.

RecogniCorp owns the ’303 patent, which provides a method and apparatus for building a composite facial image using constituent parts. Prior to the ’303 patent, composite facial images were typically stored in file formats such as “bitmap,” “gif,” or “jpeg.” These formats required significant memory and compressing the images often resulted in decreased quality. Digital transmission of these images could be difficult. The ’303 patent solved this problem by encoding the image for transmission using a variety of image classes that require less memory and bandwidth and decoding the images upon receipt.

RecogniCorp sued Nintendo for infringement of several claims of the ’303 patent. Nintendo filed a motion for judgment on the pleadings, asserting that the claims are ineligible under § 101. Subject matter directed to laws of nature, natural phenomena or abstract ideas is not patent-eligible. The district court granted Nintendo’s motion. Under Alice step one, the court concluded that the claims are “directed to the abstract idea of encoding and decoding composite facial images using a mathematical formula.” Under Alice step two, the court found that the ’303 patent contains no inventive concept. It stated that “the entirety of the ’303 Patent consists of the encoding algorithm itself or purely conventional or obvious pre-solution activity and post-solution activity insufficient to transform the unpatentable abstract idea into a patent-eligible application.” RecogniCorp appealed.

Here, the Court found that claim 1 of the ’303 patent is directed to the abstract idea of encoding and decoding image data. The patent claims a method whereby a user displays images on a first display, assigns image codes to the images through an interface using a mathematical formula, and reproduces the image based on the codes. This uses standard encoding and decoding, which is an abstract concept, long utilized to transmit information. The Court compared it to Morse code, ordering food at a fast food restaurant via a numbering system, and Paul Revere’s “one if by land, two if by sea” signaling system, which all exemplify encoding at one end and decoding at the other end.

RecogniCorp invoked Diamond v. Diehr to support its argument that claiming the use of a mathematical formula does not necessarily render a patent ineligible. In Diehr, the Supreme Court held that despite a method claim’s recitation of a mathematical formula, “a physical and chemical process for molding precision synthetic rubber products falls within the § 101 categories of possibly patentable subject matter.” However, the Supreme Court focused not on the presence of a mathematical formula, but on the subject matter of the claims as a whole. Diehr was distinguished from this case because, outside of the math, claim 1 of the ’303 patent is not directed to otherwise eligible subject matter. The Court held that adding one abstract idea (certain mathematical steps) to another abstract idea (encoding and decoding) does not render the claim non-abstract.

RecogniCorp further argued that, as in Enfish, “the district court mischaracterized the invention using an improperly high level of abstraction that ignored the particular encoding process recited by the claims.” But the Court found that the claims of the ’303 patent are clearly directed to encoding and decoding image data. The Court stated that unlike Enfish, claim 1 does not claim a software method that improves the functioning of a computer. Instead, it claims a “process that qualifies as an ‘abstract idea’ for which computers are invoked merely as a tool.” Comparing this case to Digitech Image Technologies v. Electronics for Imaging, it concluded that the ’303 patent claims a method whereby a user starts with data, codes that data using “at least one multiplication operation,” and ends with a new form of data.

The Court then moved to Alice step two. Under this step, the Court searches for an “inventive concept” sufficient to “transform the nature of the claim into a patent-eligible application.” To save a patent at step two, an inventive concept must be evident in the claims. RecogniCorp argued that the combination of claim elements, i.e., the “particular encoding process using the specific algorithm disclosed” in the patent “transforms” the abstract idea into a patentable invention. The Court rejected this argument, finding no inventive concept. It explained that in DDR Holdings v. Hotels.com, the Court found that the patent claims satisfied Alice step two because “the claimed solution amounts to an inventive concept for resolving [a] particular Internet-centric problem.” Here, the Court found that nothing “transforms” the abstract idea of encoding and decoding into patent-eligible subject matter. Additionally, while the ’303 patent included a mathematical formula, “[a] claim directed to an abstract idea does not automatically become eligible merely by adding a mathematical formula.” The mathematical formula in this case merely changed the data into other forms of data, rather than transforming the abstract idea into a patent-eligible application.

The Court explained that RecogniCorp did not allege a particularized application of encoding and decoding image data. “Claim 1 does not even require a computer; the invention can be practiced verbally or with a telephone.” While independent claim 36 specifies the use of a computer, the Court found that it “does exactly what we have warned it may not: tell a user to take an abstract idea and apply it with a computer.” Because the Court could find no inventive concept under Alice step two, it affirmed the district court’s decision that the ’303 patent claims ineligible subject matter.