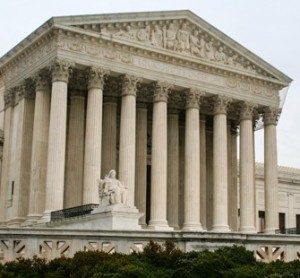 On March 22nd, the Supreme Court sided with Varsity Brands in a 6-2 vote. Varsity Brands Inc., the world’s largest maker of cheerleading apparel, alleged copyright infringement claims against rival manufacturer Star Athletica LLC. In particular, Varsity Brands claimed that the stripes, chevrons and other visual design elements on their uniforms are copyright eligible (see below for two designs in dispute).

Writing for the majority, Justice Clarence Thomas agreed with the contention that if such designs “can be perceived as a two- or three-dimensional work of art separate from the useful article” and “would qualify as a protectable pictorial, graphic, or sculptural work—either on its own or fixed in some other tangible medium of expression—if it were imagined separately from the useful article into which it is incorporated.” The Varsity Brands uniform designs satisfied that test and, thus, are eligible for copyright protection, he wrote.

Justice Thomas was careful to note that the ruling only limits competitors from copying Varsity Brands’ “surface designs.”

“Respondents have no right to prevent anyone from manufacturing a cheerleading uniform that is identical in shape, cut, or dimensions to the uniforms at issue here,” he wrote.

In addition, Justice Thomas acknowledged that design element copyrights are a somewhat murky area of IP law, and that the Supreme Court hoped to provide some clarity on the issue in this ruling.

The dispute began in 2010. Star Athletica attorneys contended that clothing, as a “useful item,” is not eligible for copyright protection. Furthermore, they claimed the design elements are simply a component of the cheerleading uniform and without them, the garment no longer would be a cheerleading outfit.

A federal court sided with Star Athletica in 2014. However, a Sixth Circuit panel reversed that decision the following year in a 2-1 split decision. The Sixth Circuit held that “the graphic features of Varsity’s designs can be identified separately from, and are capable of existing independently of, the utilitarian aspects of cheerleading uniforms.”

In the panel’s majority ruling, Circuit Judge Karen Nelson Moore wrote that under Star Athletica’s interpretation, a painting “would be unprotectable because the painting decorates the room in which it hangs. But paintings are copyrightable.” But Circuit Judge David McKeague, writing for the dissent, said that “Without stripes, braids, and chevrons, we are left with a blank white pleated skirt and crop top. As the district court recognized, the reasonable observer would not associate this blank outfit with cheerleading. This may be appropriate attire for a match at the All England Lawn Tennis Club, but not for a member of a cheerleading squad.”

In September, the Solicitor General’s office filed an amicus brief in support of Varsity Brands in the case, stating “Nothing in the Copyright Act, which incorporates pre-existing regulatory language that authorized the registration of many designs of useful articles, supports a presumption against the copyrightability of a work that can be characterized as such a design.”

The upshot for clothing and furniture companies is that the Varsity Brands ruling gives product manufacturers an additional tool to combat knock-off designs. With that in mind, manufacturers should review their product line to ensure their copyright-eligible products are protected under this new standard.

Jack Hicks is a licensed patent attorney at Womble Carlyle with more than 30 years of experience. He counsels clients to determine the type and scope of intellectual property protection that meets [...see more]