USPTO continues to decline comment on status of Michelle Lee 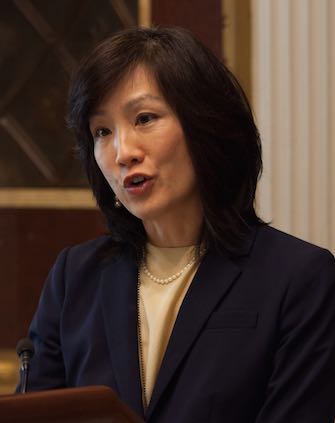 The first full work week for the Trump Administration begins in earnest today, and the United States Patent and Trademark Office (USPTO) continues to decline comment on whether or not Michelle Lee is still Under Secretary of Commerce for Intellectual Property and Director of the USPTO.

Since Friday, January 20, 2017, the Department of Commerce leadership webpage has listed the position of USPTO Director as “Vacant.” As of 11:17am EST this morning that remains unchanged. See screenshot.

I have a few questions about the Director situation. Since Friday the Department of Commerce leadership page lists the position of Under Secretary of Commerce and Director of the USPTO as “Vacant.”

Is Michelle Lee still working at the USPTO? If yes, can you tell me what her title is? If not, who is Acting Director or has been given the power and responsibilities of Acting Director?

Also, 35 U.S.C. 153 says: “Patents shall be issued in the name of the United States of America… and shall be signed by the Director or have his signature placed thereon…”

When patents issue on Tuesday, January 24, 2017, who will sign them or have their signature placed thereon?

The reply I received, which came quick, simply stating that I should report that the Office declined to comment. At this point what seemed an interesting curiosity is becoming increasingly odd. Others who were held over by President Trump to serve at least until a replacement was confirmed have been announced. For example, the National Institutes of Health announced on Thursday, January 19, 2017, that NIH Director Francis Collins was asked to stay on by President Trump. A similar announcement was expected regarding Michelle Lee, but as of this morning still has not been made. To date the only quasi-official announcement regarding Lee came at a breakfast fundraiser on Thursday, January 19, 2017, when Congressman Darrell Issa told a group of tech executives that Lee would be held over.

At this point it does seem quite likely that Michelle Lee is still Director of the USPTO, or at least will be the Trump Administration nominee for the position. Nevertheless, the longer mixed messages are being sent and the longer the Office declines to comment on who is running the USPTO the more mysterious things become.