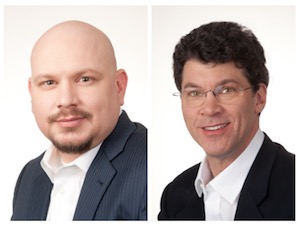 Leason Ellis, a boutique intellectual property law firm specializing in patent, trademark and copyright protection and litigation, has announced that Cameron Reuber and Joel Felber have been promoted from Associate to Partner.

Reuber joined Leason Ellis in 2010, and he has established a diverse litigation practice counseling those seeking to strategically identify, protect and exploit intellectual property assets. He has worked to enforce and defend patents, trademarks, copyrights and trade secrets in an ever-growing range of industries and technologies. He has litigated hundreds of cases in federal courts, as well as other forums, and has successfully championed his clients’ rights at trial. In January, Reuber secured a jury verdict in an intellectual property licensing matter absolving a well-respected Westchester business of all liability and $22 million in damage claims. Prior to that, Reuber secured a jury verdict in a patent infringement case that not only absolved two Fortune 500 clients of all liability, but also led to an award of his clients’ attorney fees. Reuber also has a wealth of experience mediating and settling matters for clients. One matter in which he counseled a Fortune 500 plaintiff resulted in his client receiving a $50 million settlement. At the time, it was one of the top 25 patent infringement settlements ever recorded.

Reuber is a native of Bermuda and holds degrees from Virginia Wesleyan College (B.A., 1997) and George Mason University School of Law (J.D., 2001). He is admitted to the state bars of New York, Virginia and the District of Columbia.

Felber joined Leason Ellis in 2012 and has focused his practice on domestic and international intellectual property protection, particularly with regard to computing hardware and software technologies. He assists clients in protecting and leveraging their inventions and related intellectual property by procuring utility patents, design patents, copyright and trademark registrations, as well as by negotiating and drafting legal agreements.

Prior to practicing law, Felber enjoyed a successful career in industry that included computer programming and software development in numerous prominent positions. Felber’s career in law and industry provides a unique combination of skills that makes him well-suited for protecting and enforcing clients’ intellectual property rights.

Felber is a resident of Norwalk, Connecticut, and a graduate of Hartwick College (B.A., 1984) and Western New England College School of Law (J.D., 1991). He is admitted to the bar in Connecticut and is registered to practice before the United States Patent and Trademark Office.

Located in White Plains, just outside New York City, Leason Ellis manages global patent, trademark and copyright portfolios and litigates intellectual property disputes for clients of all sizes, including Fortune 100 corporations. Founded in 2008, Leason Ellis is now among the largest intellectual property law firms in New York State that are located outside New York City. The firm has been ranked as one of the nation’s leading IP law firms by IP Today, IAM Patent 1000 and World Trademark Review, and several of its lawyers have been recognized by Super Lawyers and Who’s Who Legal. We invite you to explore our website (www.leasonellis.com) for further information.