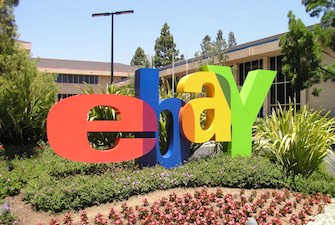 “eBay’s Whitman Campus” by Steven Arnold. Licensed under CC BY 3.0.

eBay Inc. (NASDAQ:EBAY) of San Jose, CA, is a multinational e-commerce corporation providing sales services for businesses and individuals across the Internet. Unlike its major e-commerce rival Amazon.com Inc. (NASDAQ:AMZN), eBay is well-known as being a website for auctions, some of which see some skyrocketing bids by customers. For instance, a recent auction for a limited edition pair of Air Jordan sneakers branded by the rap artist Eminem netted over $227,000. Near the end of November, eBay secured a $30 million tax incentive from the government of Nevada to aid in a $412 million investment made by the company to expand data operations in Las Vegas. Overseas, the company has recently made moves in South Korea to establish a same-day delivery service for groceries and fresh produce.

With the holiday season approaching, eBay has been gearing up with a couple of new programs meant to encourage shoppers to consider e-commerce transactions through its online platform. The company’s “Wishbone Deal” offered online shoppers a choice between two discounted deals, the winner becoming available in limited quantit 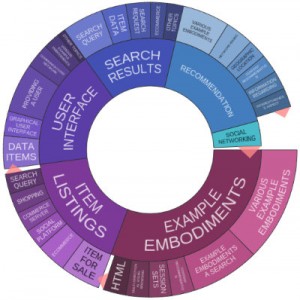 ies on Thanksgiving Day. eBay is also worked to export its Black Friday discount deals by offering those sales for the first time ever in India. Over in the United Kingdom, eBay will be rolling out the world’s first-ever social gift concierge service for consumers who need help finding the right present for friends or loved ones.

The patent filing activities of eBay are fairly active, the company placing 149th overall in 2014 in terms of patents earned from the U.S. Patent and Trademark Office with 236 patents in that year, an increase of 15.1 percent over the previous year. So far through 2015, eBay has only earned 106 U.S. patents, a figure we were able to find out using the patent portfolio analysis tools available through Innography. As the text cluster posted here will show readers, a great deal of eBay’s innovative activities are focused on the areas of item listings, user interfaces and recommendations, with a tiny bit of focus in social networking.

The patent applications filed recently by eBay continue to show signs of trying to improve sales for brick-and-mortar retail establishments as readers can see within U.S. Patent Application No. 20150287084, titled Systems and Methods for Implementing Online Marketplace for Local Merchants. The system that would be protected here includes a non-transitory memory storing account information of local merchants and processors coupled to the memory to perform a method of searching the account information for local merchants located near a user, determining information about the user based on the user’s location and presenting an item offered at a local merchant based on the information. This online marketplace for local merchants is designed to encourage purchases at small and medium-sized businesses while reducing the environmental impacts and inconvenience of shipping items to consumers.

A system that helps consumers create a more efficient plan for shopping at local establishments is described within U.S. Patent Application No. 20150324891, entitled Systems and Methods for Prioritizing Local Shopping Options. It claims a method of receiving a target list of items each representing a product or service which a user has expressed interest in buying from a local merchant, receiving busyness data for a plurality of local merchants selling at least one target item, developing a prioritized shopping plan based on the busyness data and the list of target items and then communicating the prioritized shopping plan to a mobile device. This technology helps users plan a shopping trip to local merchants which is optimized to avoid times of heavy foot traffic at those establishments.

We also took note of an intriguing for-hire system of shipping products in densely populated urban areas which is featured in U.S. Patent Application No. 20150310532, entitled Vehicle Trunks for Commerce. It claims a system including a memory device and processors in communication with the memory device and configured to receive a vehicle request including delivery of a package from a user and provide a vehicle for hire with a trunk including space for the package. This innovation leverages the under-utilized trunk space often found in for-hire vehicles and can also be used to transport a customer to an item which was purchased. 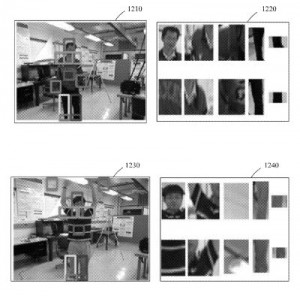 The personal style of retail consumers was an area targeted by a trio of eBay patent applications which we noted. Methods for recommending fashion items to online consumers are the focal point of U.S. Patent Application No. 20150302505, titled Fashion Preference Analysis. It discloses a system having one or more hardware processors, a receiver module implemented by the processors and configured to receive a user image and a set of spatial data including the position of a user’s body in a three-dimensional space, an analysis module implemented to perform an analysis of the image and spatial data and a preference module implemented to identify a fashion preference of the user based on the analysis. This innovation establishes a virtual fitting room which enables continual observation of a user’s fashion preferences over time. 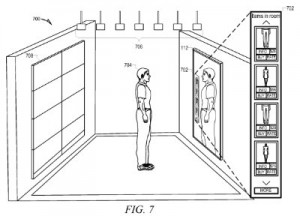 explained within U.S. Patent Application No. 20150262280, entitled Social Fitting Room Experience. It claims a system comprising an interface module that displays a user interface to receive use case information specifying an intended use of a garment being worn by an individual, a camera configured to produce an image feed of an individual wearing the garment, a polling module that selects a target audience to poll for feedback related to the image where the target audience is selected based on the use case information and who receive an image of the individual wearing the garment and an interface module that displays a feedback interface comprising the feedback data. This system operates through an interactive mirror installed in a fitting room and presents an image for polling to social network contacts or to an anonymous audience. Techniques meant to encourage a customer to purchase an item in which he or she shows interest is detailed within U.S. Patent Application No. 20150262230, filed under the title Wear Time as Metric of Buying Intent. It discloses a system including an authentication module identifying an individual in a fitting room, an identification module determining that the individual is wearing a garment, a feedback module determining an interest level of the individual in purchasing the garment based on the amount of time spent wearing the garment, a recommendation module generating an offer to the individual based on the determined interest level and an interface module that displays the offer. This system would be implemented in the same style of interactive mirror described in the above ‘280 patent application.

Finally, we felt like exploring another eBay technology which brings us back to the roots of the auction website in U.S. Patent Application No. 20150254688, which is titled Systems and Methods to Predict Bidding Behavior. It would protect a system having at least one processor and memory containing instructions executable to run an identifying module to identify a listing including listing information for an item auctioned on a network-based marketplace as well as bid classification information based on the item’s number of received bids, and then a predicting module to predict whether no more bids will be made based on the bid classification information. This system is intended to improve revenues for network-based marketplaces like eBay which offer auctions by reducing the consumption of screen real estate by giving a lower priority to auctions where bidding activity is expected to stop.