As any patent attorney will know, there is a great deal of valuable information contained within the file wrapper associated with the prosecution of a patent. Although a review of prior art can be helpful in determining whether an invention is patentable, more insight can be gained through a review of a patent application’s rejections, claim adjustments and other correspondence that has taken place between an applicant’s representatives and U.S. Patent and Trademark Office examiners. Today, image file wrappers made available through the Patent Application Information Retrieval (PAIR), accessible over the Internet, contain this information.

The Public PAIR system has its shortcomings, however. It’s not terribly useful for finding a wide range of patents in a certain technological field, not in the same way that users can search for patent keywords on Google’s patent search or FreePatentsOnline.com. To look up an image file wrapper through the PAIR portal, a person must already know the specific patent for which he or she is looking. It’s also difficult to view more than one file wrapper at a time, which makes it difficult to compare official correspondence related to multiple patent applications.

To illustrate the kind of information that Public PAIR can reveal, we’ve collaborated with The Patent Box, a patent research startup headquartered in Philadelphia, PA that develops Public PAIR research and monitoring tools. As anyone who has used the PAIR online portal will know, staying on top of issue notifications for a patent application can be time consuming and current monitoring services tend to be an expensive alternative. However, since The Patent Box is currently piloting a new high-volume monitoring service they were able to use to show us some of the patent applications from Apple Inc. (NASDAQ:AAPL) for which the USPTO will soon issue as patents. The following should give our readers at least a little idea of the kind of information that can be quickly gleaned using PAIR research tools like what The Patent Box is currently offering.

On October 27th, Apple will be issued a patent for the technology which is outlined within U.S. Patent Application No. 20110133995, filed under the title Bezel Gap Antennas. The patent issued will protect an antenna in an electronic device having a ground plane, a conductive path formed partly from conductive structures and comprising a gap filled with dielectric, a dielectric coating on the conductive structures, a first antenna feed terminal connected to the conductive path at a first side of the gap, a second antenna feed terminal connected to the ground plane and an electrical element interposed in the conductive path between the two antenna feed terminals. This innovative antenna configuration provides a compact structure for a wireless antenna in an electronic device which is less susceptible to interference from conductive structures, like metal housing components, which can affect radio-frequency performance. The file wrapper for this patent application shows that it has faced two final rejections, the latest of which was this May and cited U.S. Code Title 35 Section 112 objections for lack of specification in at least one claim, while multiple claims ran afoul of Section 103’s rules for obviousness. 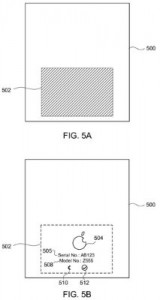 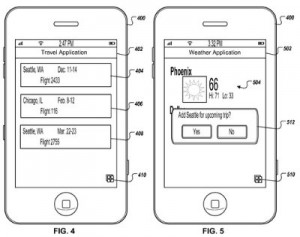 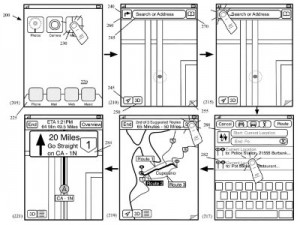 Many electronic device developers have an interest in providing upgraded navigational routing information applications and Apple will increase its IP holdings in this area when they are issued a patent on the 27th for U.S. Patent Application No. 20130332077, which is titled Encoded Representation of Route Data. The amended first claim of this patent will protect a method of encoding route data on a route server by receiving a request for route data for a route comprising a plurality of junctures including maneuvering instruction data associated with each juncture, determining whether the associated maneuvering instruction data is producible by the route client and encoding the route data by excluding any maneuvering instruction data that can be produced by the route client. This invention is intended to address shortcomings in traffic data displays on which traffic data is superimposed, which can sometimes produce an inaccurate representation of traffic data over multiple zoom levels of static road images. In November of last year, this patent application received a non-final rejection of most claims under Section 101 of U.S. patent code, the examiner arguing that the claimed invention is directed at unpatentable subject matter as an abstract idea which was no more than “mere instructions to implement the idea on a computer.”

Finally, the 27th will also be the issue date for the patent protecting the technology outlined within U.S. Patent Application No. 20130332942, which is titled Targeted Memory Pressure Event Notifications. The patent will protect a method of managing memory by assigning priorities to processes running on a device, determining that less than a threshold number of high priority processes are active on the device when a memory pressure on the device exceeds a threshold and sending a memory pressure event notification to an active process with the lowest priority to initiate a memory reclamation event when less than the threshold number of high priority processes are active on the device. This innovation is intended to provide a computing scheme through which a limited amount of random access memory (RAM) can be balanced between high priority applications running critical system processes and low priority applications which can affect a user’s experience if terminated because of a lack of available RAM. One final rejection was issued on this patent application in April 2014. It issued a rejection for obviousness under Section 103 in light of a similar technology filed with the USPTO for a system of managing an electronic device’s RAM to process multiple applications without killing applications, again impacting a user’s experience.

About The Patent Box

The firm is seeking pilot users now for their new high-volume Public PAIR monitoring service.  The service is designed to support competitor monitoring applications and should launch at a monthly cost of less than $2/application.   The service utilizes a variable PAIR synch interval that is dynamically determined for each application using a prosecution event model that the firm is developing. Specifically, the pilot program is seeking users interested in monitoring 250 or more U.S. patent applications concurrently.  More information about the pilot can be found here.