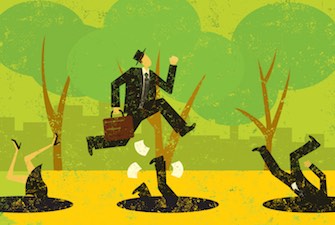 Periodically I write articles aimed at giving inventors some information about preparing a patent application, such as primers on writing patent claims, writing method claims, describing your invention completely and language difficulties, to name but a few.  Every time I write such an article I cringe at least a little because I fear inventors will get the wrong idea.

A typical inventor, who might have several inventions over the course of a lifetime, will never become conversant enough with the intricacies of patent practice to do the job that should be done with respect to obtaining a patent. That doesn’t mean, however, that inventors should not be informed. It also doesn’t mean that inventors won’t be forced to pursue their dreams on their own because they simply cannot afford the high price of hiring a patent attorney.

I like drawing an analogy to the commercial where the man is sitting at the table with a butter knife and the surgeon is on the phone is telling him how to perform the surgery.  He asks: “Shouldn’t you be doing this?”  Preparing a patent application on your own is a lot like doing surgery on yourself.  You are going to make mistakes, some of which will likely be major mistakes. It is certainly not a good idea to represent yourself if you have the means to hire a patent attorney.

With all of this in mind, this and other articles are intended to be information guides for those who wish to learn more about the nuance of patent law and practice, or those who through circumstances are choosing to represent themselves fully understanding the path that lies ahead. competent enough at patent drafting to represent themselves in a way that would result in .  This level of experience makes it unrealistic to believe you can do it yourself without any assistance and do it just as well as a patent attorney or patent agent would or could.

Without further ado, here are some pitfalls to be on the lookout for when you are preparing the Background of the Invention.

1. Don’t Describe the Prior Art

First and foremost it is critical to remember that your patent application is about YOUR invention, not the prior art.

The concern about discussing the prior art centers on what is called an admission.  If you talk about what the prior art does, when it is necessary to engage in patent prosecution with the patent examiner, you may find it exceptionally difficult to back away from positive, descriptive statements that have previously been made.  For this reason, I suggest that you not describe what the prior art is or does, just explain in a vague way what it is lacking in the prior art.  Explaining what it is lacking will in a subtle way demonstrates the importance of your invention, which is the goal.

The other concern here is that the more you explain about the prior art the more likely you will be making it easy for the patent examiner to issue an obviousness rejection.  Obviousness is not supposed to be a hindsight inquiry because, after all, everything is obvious in hindsight once it has been explained.  It would, however, be naive not to notice that over the last 5 years the law of obviousness has been trending toward an inquiry that allows a decision maker, such as a patent examiner, to employ some hindsight.  If you explain the prior art and the problems too well then your solution, and hence your invention, could seem obvious.  So you must tread lightly. Less is more when you are discussing the prior art.

2. Invention Compared with Prior Art

There is a great tendency among inventors to want to compare their invention directly with the prior art that they know about.  This is a huge mistake.  You want to say as little as possible about the prior art, as discussed above.  Sure, you want to know what else is out there and you absolutely should describe your invention to accentuate the positive and likely patentable aspects of the invention, but direct comparisons with the prior art are full of danger.

The best thing to do is explain why your invention solves problems and/or is important for the relevant consumer audience.  In order to accomplish this you do not explain what else is available to consumers and why it is inferior, missing functionality or missing parts.  Remember, the focus of the application MUST be on your invention.  It can be extremely helpful to create a comparison chart or write text comparing the prior art you know about with your invention, but this should be used by you or provided to your patent attorney or patent agent.  It will be exceptionally helpful to have this information, and I ask my clients to provide it to me whenever they are willing to be so involved.  This information informs how you describe the invention, and will be helpful later during prosecution, but it is not appropriate in a patent application.

Of course, the more you know about the prior art and how your invention differs the easier it will be to describe the positive, likely patentable features of your own invention. For more information on this point see Patent Drafting: Identifying the Patentable Feature.

Although it is appropriate to describe the deficiencies of the relevant prior art, at least in cursory terms and only to the extent that it facilitates your discussion of what is important to know about your invention, actually using the term “prior art” is not considered appropriate.  This is because if you use the term “prior art” it will be considered to be an admission that the reference is in fact prior art for your invention.  This may seem like a small point, but during prosecution it can come back to haunt you.  For example, what if you are wrong and the reference you are discussing is not really prior art?

The same admission concern is not present for language such as: “Some attempted solutions have tried X, but this has not sufficiently addressed the needs of the industry owing to its awkwardness and fragility.” Notice this does not say anything positive about what the prior art is or does, it doesn’t even refer to X as prior art. You merely mention vaguely why X is not sufficient for the needs of the industry.  Saying this one would expect that you have an invention that is elegant and sturdy, for example.  So you only vaguely explain the prior art and only to the extent that it sets up an opportunity to accentuate the positive relative to your invention.

4. Understand the Purpose of the Background

5. Keep the Background Short and to the Point

The Background is supposed to be about the prior art, or at least that is what the Patent Office wants. You won’t positively discuss the prior art because of the pitfalls already discussed. You will only discuss in vague, cursory terms the prior art and only to the extent that it can be useful and NOT harmful.  You must always remember the problems inventors face when they lock themselves into a particular articulation of structural features and when they trivialize their own invention by making it seem obvious.

If you talk about your invention as being simple or easy you are begging the patent examiner to view it as obvious. Additionally, if you do such a good job describing the prior art the examiner may conclude that your solution is the obvious next step, which would mean no patent could be issued. For that reason the Background should ordinarily be quite short and to the point.

The Patent Office prefers that the Background be broken down into two sections: (1) The Field of the Invention and (2) the Background of the Prior Art.  For the Field of the Invention you will likely say something straightforward and simple: “The invention generally relates to INSERT TITLE.”  The Field of Invention is optional, so typically if you include it you want to keep it short and sweet, and inserting the title here offers nothing new you haven’t already said because the title must be descriptive.

You will NEVER refer to the Background of the Prior Art!  You will have a section labeled Background and section “A” will be the Field of the Invention, and section B will be “Background.”  Why?  Because you NEVER want to use the term “prior art.”

If you follow these rules you will undoubtedly wind up with a brief Background that says little or nothing substantive.  That is not only fine, but it is perfect!