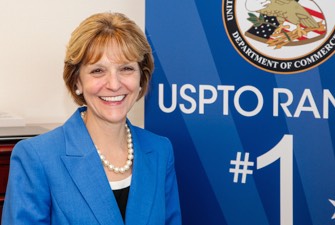 In her role with Oblon, Focarino will continue her career as a thought leader in the area of patent prosecution, procurement, and rule based USPTO practices. Her decades of agency insight and expertise will serve as an invaluable resource to Oblon clients. In choosing Oblon, Focarino will join former Assistant Secretary of Commerce and Commissioner of Patents and Trademarks, the Honorable Gerald J. Mossinghoff, the former Deputy Commissioner for Patent Examination Policy, Stephen G. Kunin and the former Register of Copyrights, Marybeth Peters, as well as many other former patent examiners and administrative patent judges (APJs).

In her previous role as Commissioner for Patents, Focarino was responsible for the management and direction of all aspects of the USPTO which affect the administration of patent operations, examination policy, resources and planning, and budget administration. Focarino helped lead the USPTO through the implementation of the America Invents Act (AIA). She previously served as Deputy Commissioner for Patents, providing administrative oversight to nine Patent Technology Centers and coordinating the activities of patent application examination and reissues of patents.

Focarino received a degree in physics from the State University of New York, and a Certificate in Advanced Public Management from Syracuse University’s Maxwell School of Citizenship and Public Affairs.

According to Bradley D. Lytle, managing partner of Oblon, “Peggy’s esteemed career at the USPTO is a testimony to her commitment to excellence and she will be an outstanding addition to the firm, supporting our clients when they are addressing their most complex intellectual property issues and mapping out their patent strategies. Peggy’s experience will be highly relevant to a wide range of Oblon’s clients and we’re fortunate to be able to offer someone with her impressive background as an addition to our existing practice.”