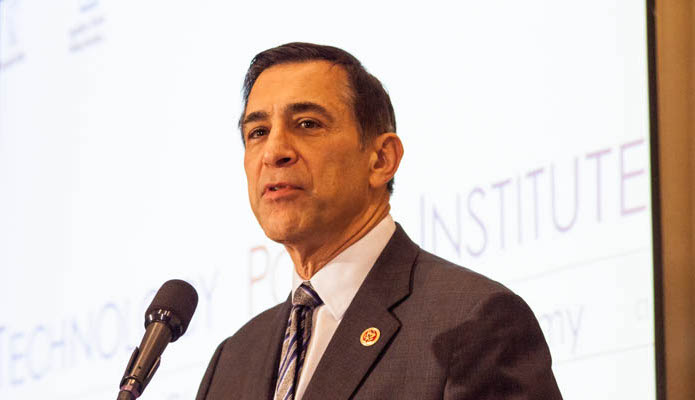 Congressman Darrell Issa (R-CA), a member of the House Judiciary Committee and the Chair of the Subcommittee on Courts, Intellectual Property, and the Internet, struck a defiant tone this morning speaking at the National Press Club. Issa, speaking at Patents in Theory and Practice: Implications for Reform, sponsored by the Technology Policy Institute, explained in no uncertain terms that the patent litigation reforms contained in the Innovation Act will not be watered down, period. He told the audience that never again will a defendant first learn of the allegations against them only at the end of the case.

Issa, known for his bombastic style, explained that he has seen the patent litigation process both as a plaintiff and a defendant. His message was clearly one that those opposing patent reform will not appreciate. He told the audience that Congress would listen to those both for and against the legislation, but point blank told those who are seeking alterations that they will not succeed. He also likened patent reform to tort reform, which seems a terribly unfair comparison given that those who will be most negatively impacted by patent reform are independent inventors, Universities and entrepreneurial start-ups.

In private conversations with several in attendance, everyone that I spoke with agreed that Issa’s tone was defiant. Several in the audience who support major revisions to the Innovation Act were surprisingly pleased with Issa’s comments, explaining that Issa’s in-your-face, domineering rhetoric could be a sign that those opposing the legislation are gaining in the House. Issa being so dismissive of the thought of changing the legislation could simply be him trying to discourage opponents from continuing to fight

What follows is a transcript of Congressman Issa’s remarks as delivered.

For those of you who are here with the press today, there’s really no story here that hasn’t been told. For decades innovation has increased but the quality of patents, the quality of the judiciary that oversees and adjudicates those patents and the quality of the claims made by non-practicing and practicing education, inventors and patent holders has complicated and crowded the patent courts. A number of years ago I was honored to try to hopefully improve the quality of the adjudication within the article of previous reports. It is working. Not working perfectly but the number of reversals by the Federal circuit is the best indicator of whether or not the District Court gets it right.  Having said that, we must remember that the federal circuit, at times, could be less than infallible.

A number of years ago we tried to improve the PTO. It is still an ongoing process. It is one that my committee will continue to look at. Reexaminations are the most powerful tool where the exertion by a patent holder exceeds what he or she really should have gotten or in some cases did get within the language of the claims. But the patent bill we are dealing with today, deals with a much simpler, easier to understand problem. Allegations in large numbers are coming from people whether they are so called “trolls” or in some cases what I call patent bullies; companies who practice, have large portfolios and make vague claims as to what you might or might not be infringing. So when people talk about trolls, I always include patent bullies.

If I have got 25,000 patents and today I say “Do you feel lucky?” And I go ahead and sue you vaguely under a portfolio or even just tell you that if you don’t you want to be sued out of business, that you’ll sign a license broadly and early. The fact is there is very little protection. Under the Invents Act, the most critical element and I don’t want to be short, but I want to make sure that everyone understands the heightened pleading in the Invents Act will not be watered down.

Never again will someone be able to make a claim in such a vague way as to, in fact, get to the end of the trial and millions of dollars before they’re actually held accountable for “What it is I did wrong in your eyes?” This is important in two ways. One, obviously we are trying to deal with patent trolls as they are often referred to. But there is another reason. Patent holders are part of the innovation process by the very nature of their allegations that their patent and your product line up too closely.

Innovation begins often when you have a problem that cannot easily be solved. In a highly competitive industry, a $2.00 license may in fact make you non-competitive, particularly if the patent holder is your competitor. So when a specific allegation of patent infringement occurs, line by line, dependent and independent claim, it gives you the basis to innovate your own alternatives. That is the responsibility of the patent holder to say when you infringed and how you infringed because ultimately it is a pathway to new innovation or to sell it.

As the introduction very kindly said, I am inheriting as the Subcommittee Chairman a very, very bipartisan and to a certain extent bicameral piece of legislation. The House and the Senate had to draw up the language, language that got more than 300 votes last congress. You can always find 95 people to be against anything but out of 435, that is an awfully big majority. My ranking member, Jerrold Nadler and I disagreed for 14 years on a great many things but we agreed on the need for patent reform and we’ll stand shoulder-to-shoulder to make sure this bill stays strong and ultimately becomes a victory that Republicans and Democrats can both say they worked on Tort Reform together.

I want it to be understood clearly, I inherited a bill that was brought by bipartisan support. I have no intention on watering it down to please one group unless in fact that group brings two, three or four votes for everyone we lose. So when you look at the dynamics that my committee deals with, as we mark this bill up, I’ve got 95 people, more or less, minus those who didn’t return, who didn’t like this bill. And I’ve got 325 or so people I’ve got to please, so you can imagine the likelihood of significant change of this bill in the House is low. And the Senate is really no different. The changes will be minor but they may occur.

In closing, many people who vehemently oppose this bill. They come in and they go through each and every element of the reform and they ask, “Can’t you meet us halfway?” meaning “Can’t you change every single element of the bill?” I can tell you that that is not going to happen. I can tell you, as a former chairman, with respect to Chairman Goodlatte, I do not have any authority to make it happen.

And that is pretty good because what I do have the authority to do is to look for new ways to make this more streamline. To look for ways to instruct or to insist both the patent office and their re-examination process and the article three Judges to make this process smoother and faster. I will close with this. I have been a Plaintiff and I have been a Defendant. In neither case did I want to slow down the process. I wanted my day in court. I wanted my day in court if I thought I was innocent, otherwise I would have settled as a Defendant and I sure wanted my day in court as the Plaintiff because time and time again we know that the longer a process goes on, the more expensive it is and the less likely we are to actually collect the full amount you’re entitled to.

So with that, I will tell you speed to court, speed to trial, speed to re-examination, is a big part of how we are going to defeat patent trolls and improve the process for real innovators.